An eight-year restoration campaign has been completed in the New Sacristy of the Medici Chapels. 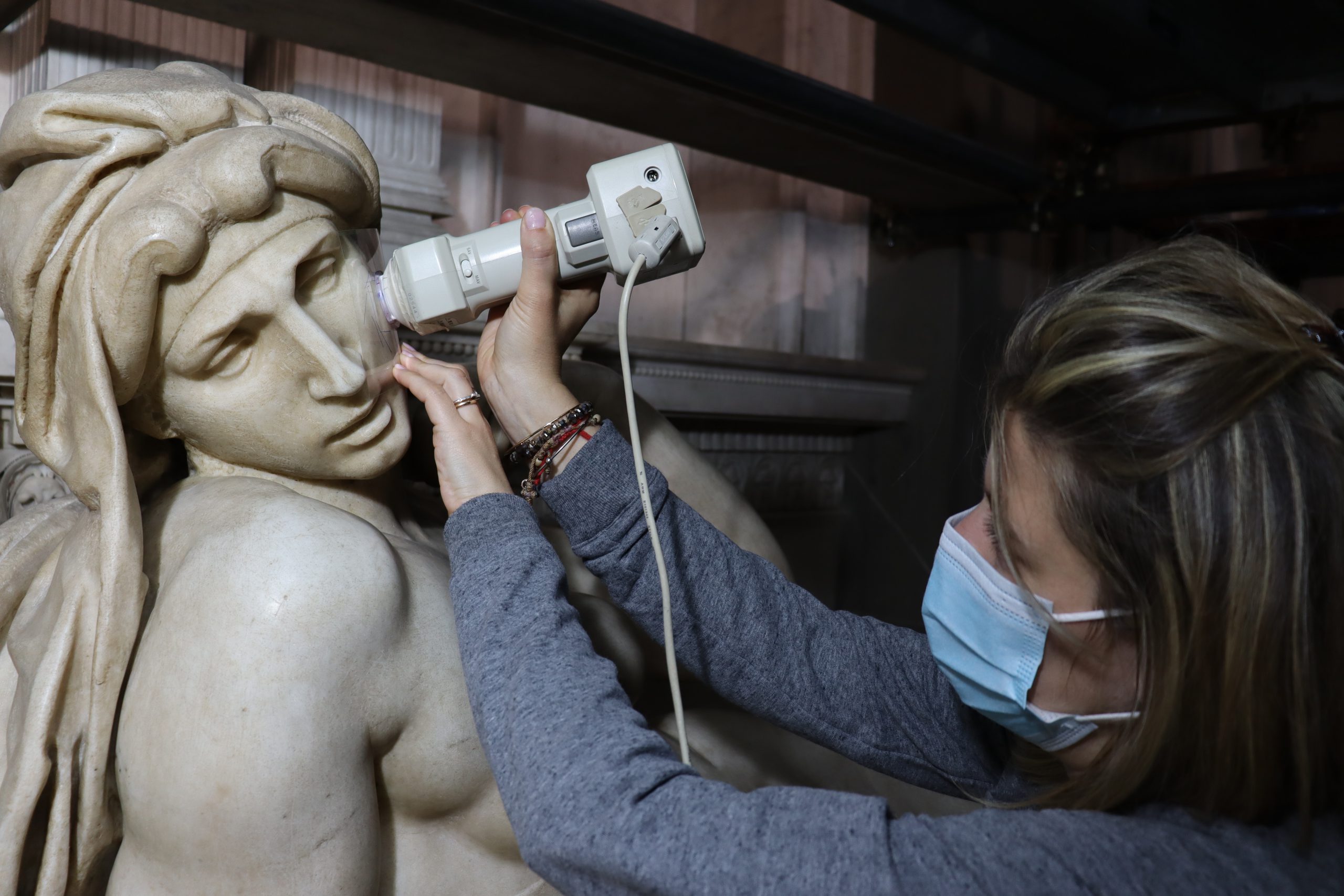 Colourimetric survey on the Aurora statue of the Lorenzo, Duke of Urbino funerary monument. Photo courtesy of CNR

The tombs and wall coverings have undergone a conservative restoration by an all-female team led by the former director of the Medici Chapels Museum, Monica Bietti, including researchers from the National Institute of Cultural Heritage Sciences and the National Agency for New Technologies, Energy and Sustainable Economic Development.

Knowledge has now been gained about the original colour of the sculptures and walls in the New Sacristy as well as about the techniques that Michelangelo adopted to create the statuary. An innovative bio-cleaning method was used for the first time on the sarcophagi and parts of the funerary monuments of Giuliano, Duke of Nemours, and Lorenzo, Duke of Urbino.

While the new lighting was installed in 2019, this most recent phase in the project involving the marble and pietra serena wall coverings ended in the second half of 2020. The marble coverings and sculptures were coated in residue and stained with substances aimed at protecting them while plaster casts were created from the 1600s to the 1900s. 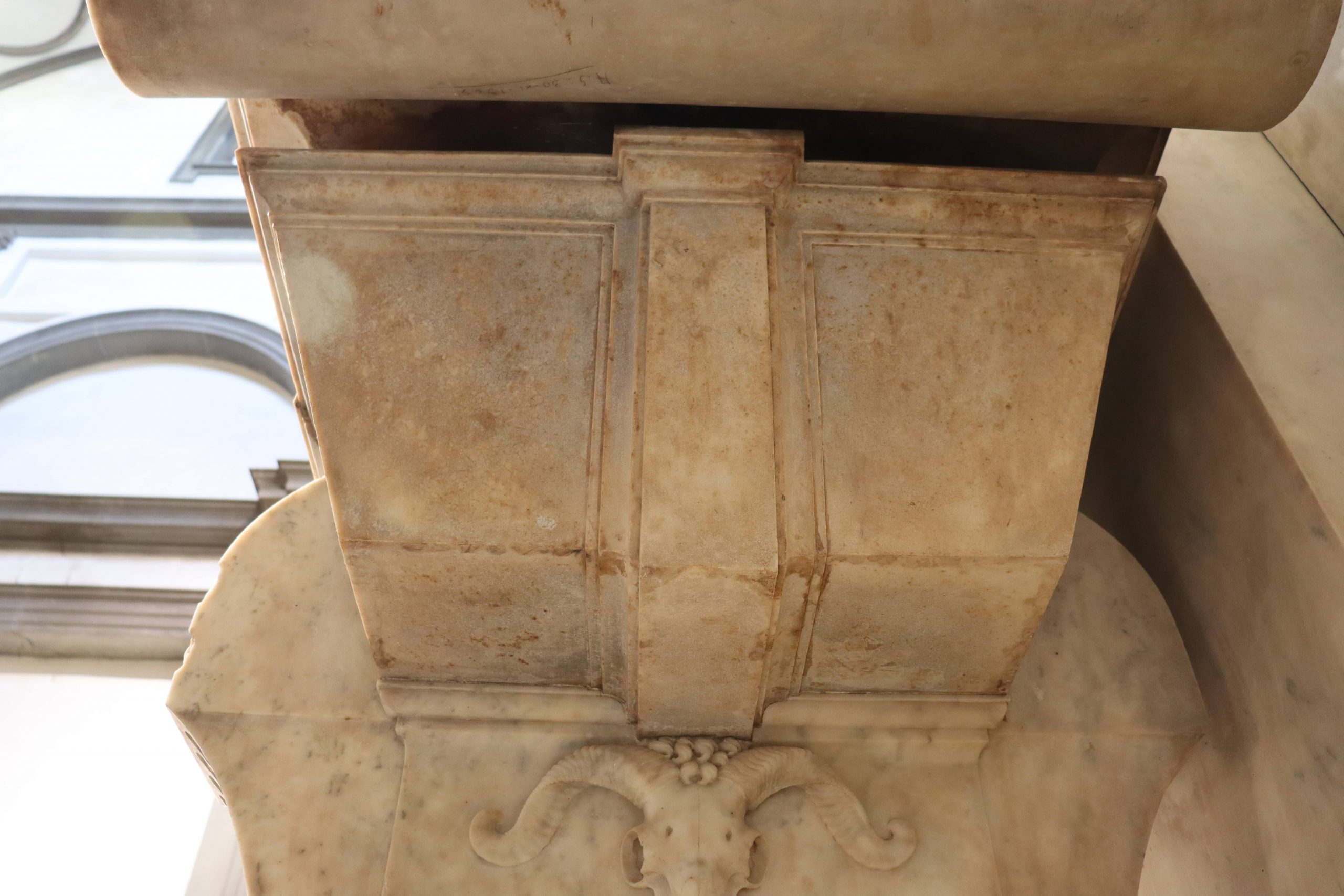 Detail of the Lorenzo, Duke of Urbino funerary monument after bacterial restoration. Photo courtesy of ENEA

A visible light photographic campaign was carried out during the restoration planning stages, which was followed by ultra-violet and infrared photography in 2019 and 2020 to check the condition of the sculptures, leading to a decision on the best cleaning methods. In particular, the sarcophagus of Lorenzo, Duke of Urbino showed dark stains along the plinth, which were identified as oxalate derived from bodily liquids that had filtered through the outside of the tomb. Lorenzo’s son, Alessandro de’ Medici, was assassinated and buried without being eviscerated, as was the norm at the time for the Medici family. The stains were removed using bacterial strains (Serratia ficaria SH7, Pseudomonas stutzeri CONC11 and Rhodococcus sp Z-CONT suspended in gel) that do not affect the original marble.

“The conservative restoration and maintenance project that has involved many professionals and Italy’s top research and scientific innovation institutions over the last five years now enables us to admire Michelangelo’s Florentine masterpieces with a new awareness of the delicate phase of choosing and shaping the marble,” commented Paola D’Agostino, director of the Bargello Museums, which also manages the Medici Chapels complex. 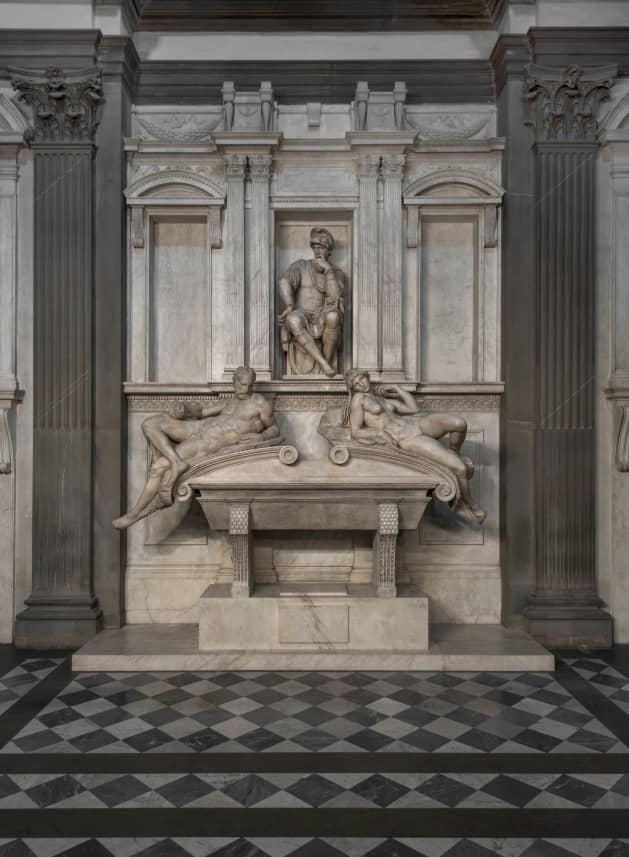 New Sacristy, Michelangelo, Tomb of Lorenzo, Duke of Urbino, after the restoration. Photo by Antonio Quattrone

Begun in 1520, the New Sacristy was commissioned to mirror the Old Sacristy designed by Brunelleschi, which can be accessed from the Basilica of San Lorenzo. The space contains the tombs of Lorenzo, Duke of Urbino, and Giuliano, Duke of Nemours, whose final resting places are adorned with the famed Dusk and Dawn (Lorenzo) and Day and Night (Giuliano). The tombs of Lorenzo the Magnificent and his brother Giuliano were left incomplete when Michelangelo was called to Rome in 1534.