Florence Baptistery reopens to the public on July 3

On July 3, the San Giovanni Baptistery opened its doors to the public once again. 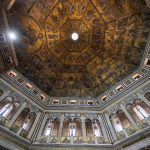 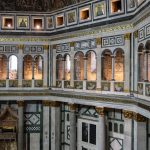 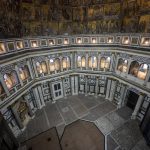 View from above the recently restored walls 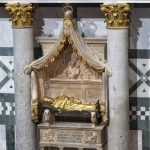 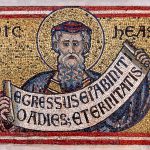 On July 3, the baptistery of San Giovanni reopened its doors to the public following eight months of closure. Four of the eight green and white Pratese marble walls with fourteenth-century mosaics depicting prophets, bishops and cherubs have been restored and are now visible to the public. The scaffolding was removed from the restored sides in January 2021, and placed on the other four walls where diagnostic investigations are now underway, due to be completed by the end of 2021.

The funeral monument of the antipope John XXIII by Donatello and Michelozzo was also removed of all dust with the gilding of the bronze figure now returned to full splendour.

During the course of the eight months of closure, maintenance of the centuries-old flooring commenced, with the marble inlays also set to be treated.

Work on the interior of the baptistery began in 2017 following the completion of the external facades and the roof. The restoration is directed and financed by the Opera di Santa Maria del Fiore, supervised by the ABAP Superintendency for the city of Florence and the provinces of Pistoia and Prato, collaborating with Italian universities and specialized laboratories.