The policy makers are coming to town. On September 17-18, G20’s agriculture ministers will meet in Florence. People, planet and prosperity are the three interconnected pillars of action as ministers from Argentina, Australia, Brazil, Canada, China, Germany, France, India, Indonesia, Italy, Japan, Mexico, the Russian Federation, Saudi Arabia, South Africa, South Korea, Turkey, the UK and the US meet in the hallowed halls of the Accademia dei Georgofili. Nestled between the Ponte Vecchio and Palazzo Vecchio, the institution is a natural fit, having shared the same purpose since its foundation in 1753 and regarded as the world’s oldest public agricultural body. (Prosperitati Publicae Augendae is the motto.)

Printmaker and collage artist Emily Cucalon took up the challenge of showing Florence growing back, piece by piece, for our September cover. The nation’s phenomenal sporting success has certainly helped the state of play: Olympic silver medal-winning Florentine swimmer Lorenzo Zazzeri talks about his Tokyo experience on page 5 and we go behind the scenes (pages 6-7) at Centro Tecnico Federale di Coverciano, the national training ground where Italy’s football team put in the work to win the UEFA Euro 2020. 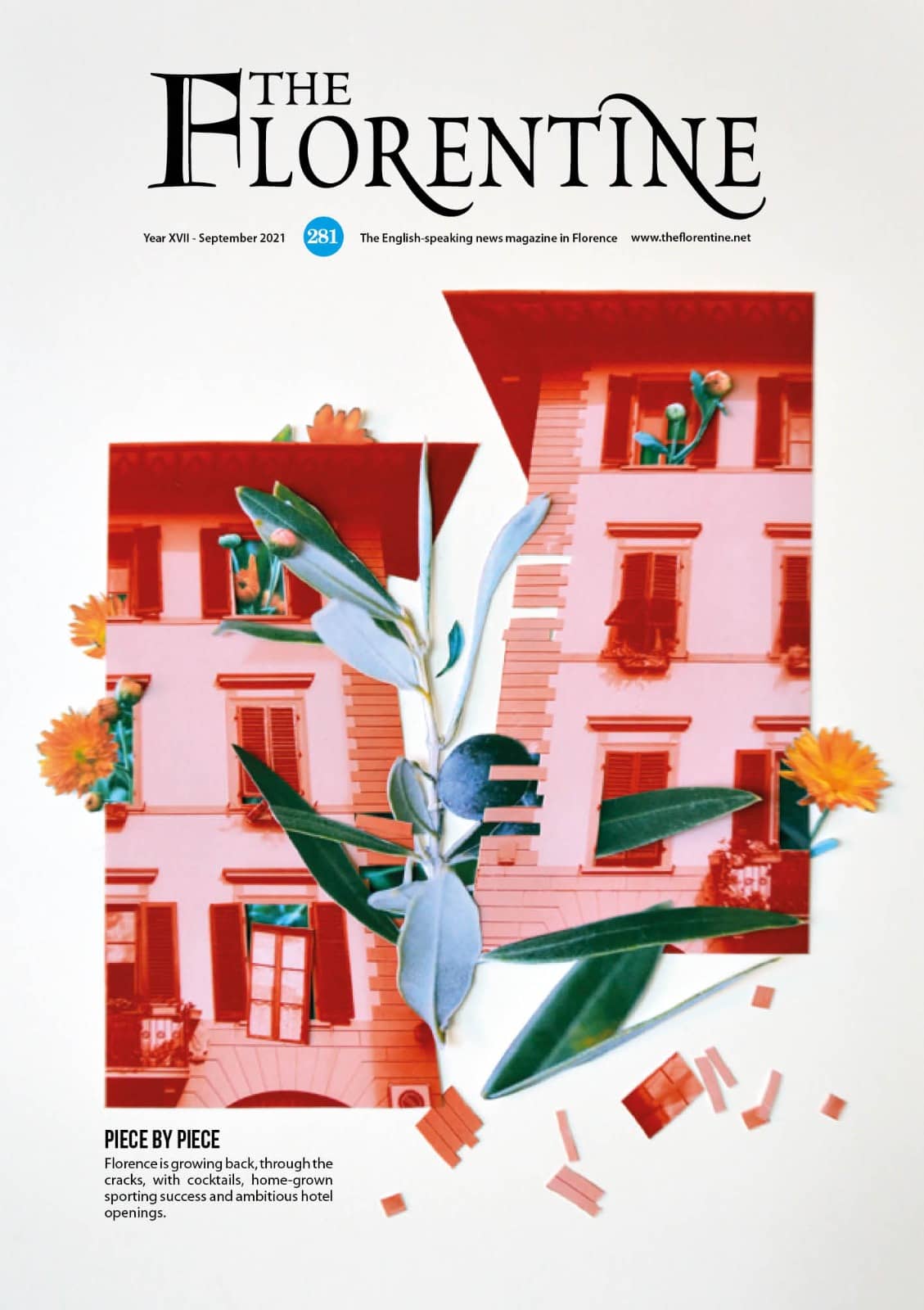 Buy the September Issue of The Florentine.

After a sold-out August, Florence greets the end of the summer with a flurry of hotel openings destined to turn heads through daring design and playful concepts. There’s never been a better time to book with the completion of massive hospitality projects such as 25hours Hotel Piazza San Paolino, Il Tornabuoni Hotel and the delightful Dimora Palanca (see page 23), where a portion of this issue was edited at the leather-topped desk in an immaculate room with a view of Giotto’s bell tower across the terracotta tiles.

September 14 marks the 700th anniversary of Dante Alighieri’s death in Ravenna. Such is the Supreme Poet’s patrimony that the anniversary has been commemorated over the last few months with institutional websites like www.danteotosco700.it and www.viedidante.it offering details about events and places to visit. Turn to pages 14 and 15 to explore Dante’s time in the Casentino and Terre di Pisa areas of Tuscany and browse page 16 for some original celebrations being held this month in Florence. At The Florentine, we’re delighted to be joining forces with Milan-based theatre producer Julia Holden and UK playwright Justin Butcher, who are curating a 24-hour marathon reading of the entirety of the Divine Comedy. Held on September 13 and 14 at Florence’s Cinema La Compagnia, Speaking Dante will take place with a live audience and in live streaming, with contributions by the likes of Ralph Fiennes, Helen Mirren, Rupert Everett, Ian McDiarmid and John Nettles. It’s a fitting tribute to the Florentine poet’s astonishing legacy and the enduring power of the Divine Comedy.

Quality mixology returns as Florence Cocktail Week resumes a weeklong smorgasbord of shaking from September 20 to 26. A mainstay on the city’s social scene, Paola Mencarelli organized the first showcase focused on fine drinks in 2016. Since then, FCW has gone from strength to strength, and now from region to region as the showcase ventures to Venice later in the year (December 13-19). We bring you three signature cocktails from Florence’s top bartenders on pages 18 and 19, plus our very own The Florentine Cocktail concocted by Harry’s Bar The Garden – Sina Villa Medici (page 20). Pea flower, Buddha’s hand from Elba and rose petals are infused in Chianti-distilled gin to create a trademark Florentine tipple—it’s on the drinks menu now. Go try it!

What’s in the September Issue of The Florentine 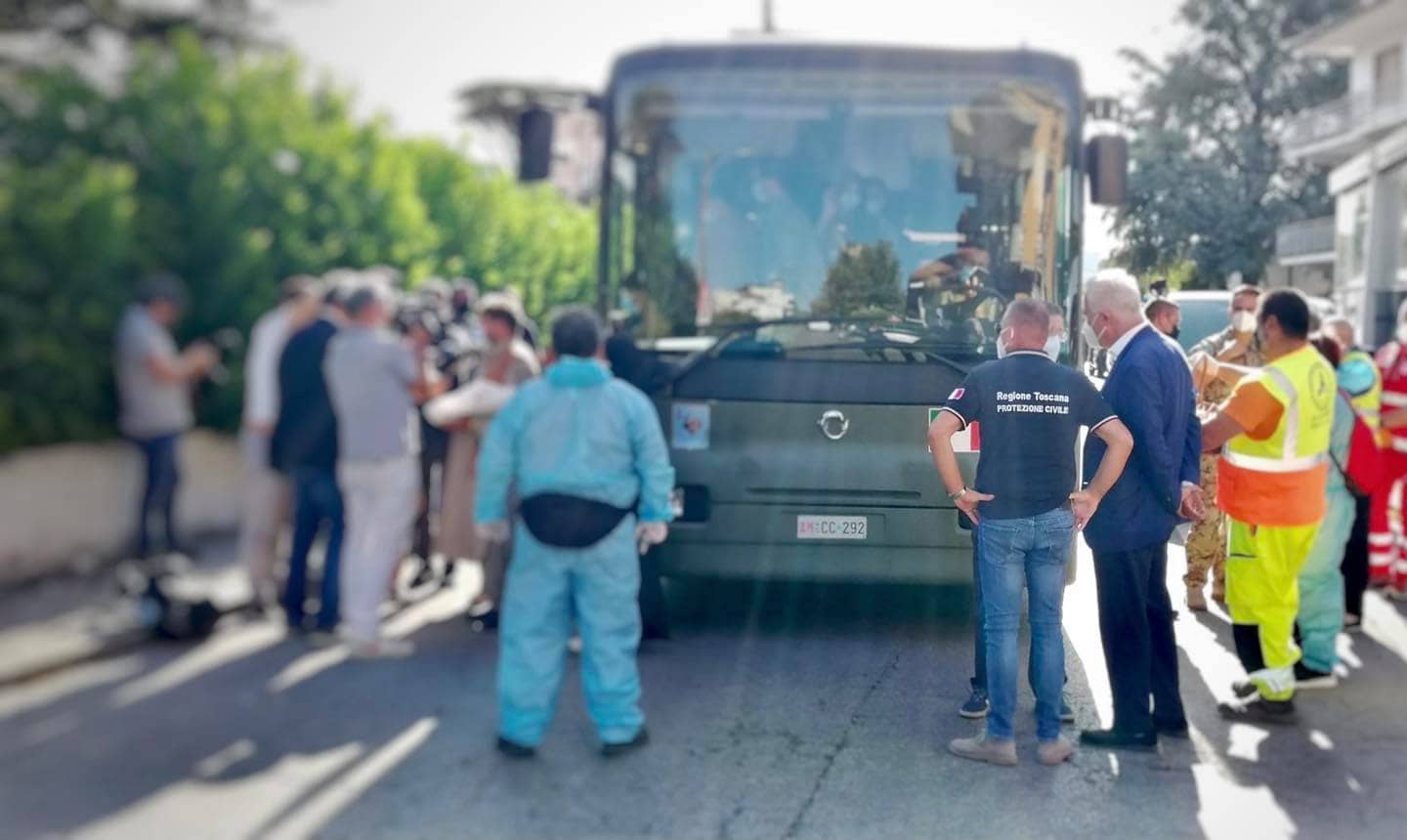 On August 25, the first 112 refugees— mainly women and children—from Afghanistan arrived in Tuscany. The region is expected to provide shelter for about 200 people fleeing their homeland since the Taliban gained control of Kabul. 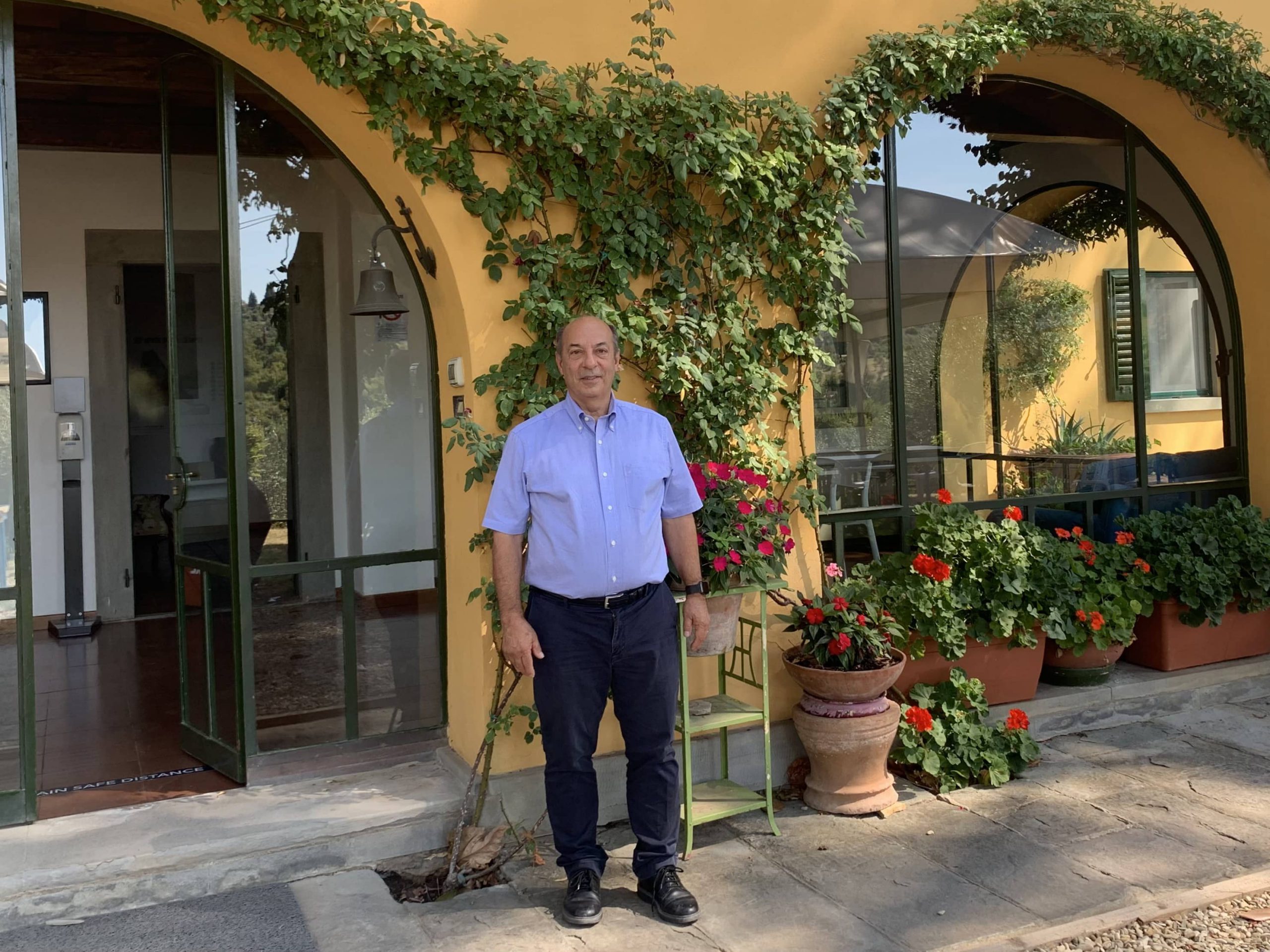 Dr. David Ottaviano has been appointed as new Head of School for the International School of Florence (ISF), with over 30 years of experience in school leadership in Asia and Central and Eastern Europe.

Changes at the Canadian School 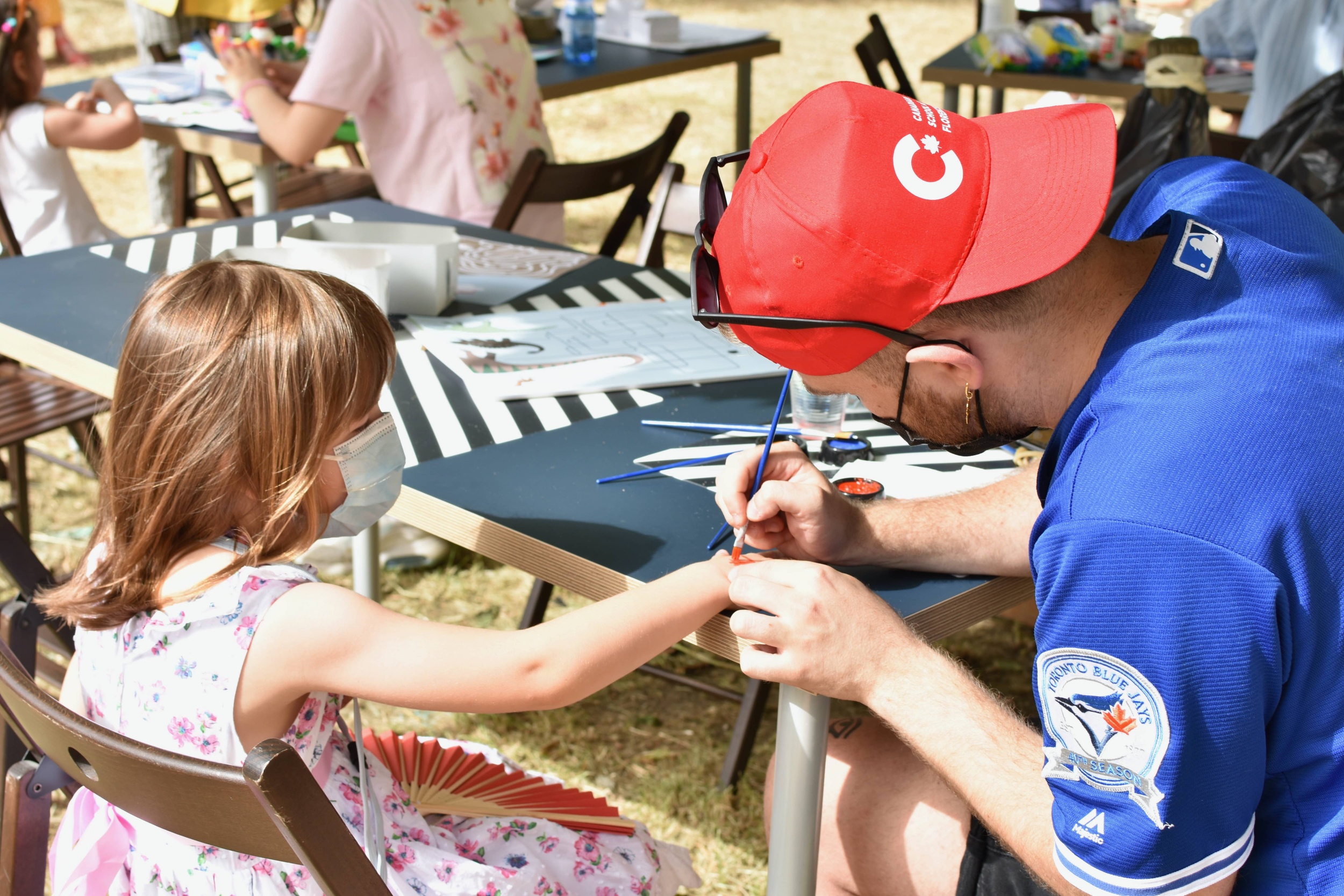 When children return to school this month, some of them will be attending a new international pre-school (3-5 year olds) and elementary (6-10 year olds) school in Fiesole. This brand-new school is a part of the Canadian School of Florence, which until now has been providing high school education from grades 9 to 12. The school’s junior campus is located in San Domenico, a hamlet of Fiesole, a short car or bus ride from central Florence.

Chapel of the Cardinal of Portugal restoration revealed 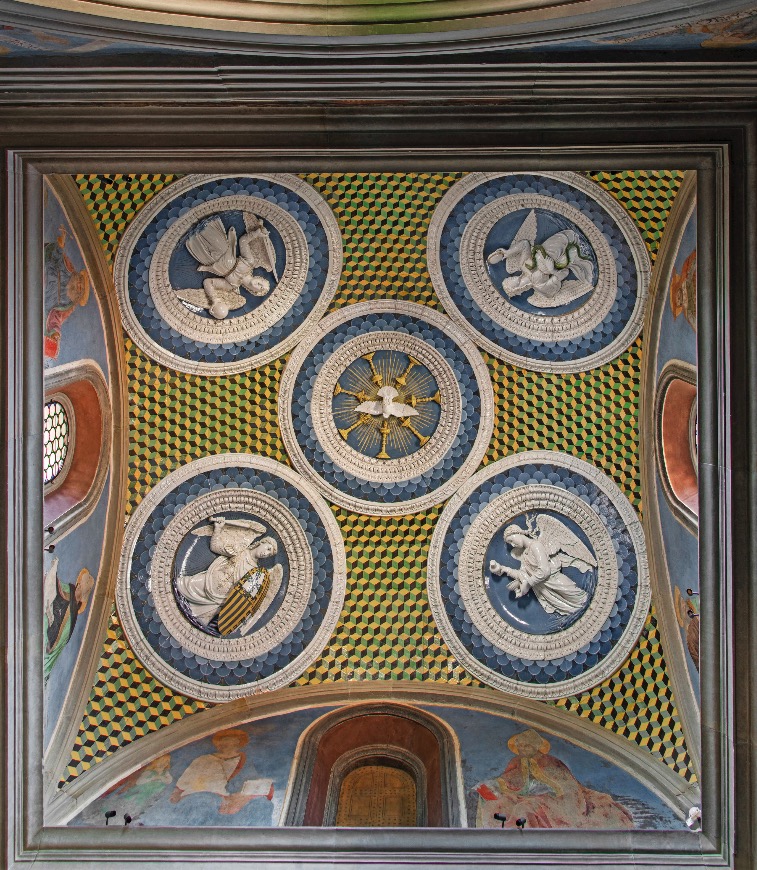 Earthly lovers of the Basilica of San Miniato al Monte and supporters of American non-profit organization Friends of Florence gathered in the hilltop place of worship to behold a miraculous restoration before the summer. Lorenzo Zazzeri (born in Florence, in 1994) competed at the Tokyo Olympic Games, winning silver in the 4×100 men’s freestyle swimming relay. He speaks with The Florentine’s Harry Cochrane. There’s something innately inspiring about Coverciano: the light breeze, rolling hills and silver-green countryside. This is the setting where Italy’s victorious Euro 2020 squad trained at every stage of the tournament under the watchful eye of Roberto Mancini. Nestled beside the Florentine hills that lead up to Fiesole and Settignano, it would be fair to say that the Centro Tecnico Federale di Coverciano is where Italy’s football team really won the UEFA Euro 2020. Behind the scenes for Hershey Felder’s George Gershwin Alone | photo by Marco Badiani for The Florentine, September 2, 2020

As we unpack our beach bags and ease ourselves into routine, these top events keep the holiday feeling going, from Hershey Felder’s George Gershwin Solo and the Firenze Jazz Festival to the Italian Chef Charity Night and Cirk Fantastik. The community is back in action also with a creative and cultural tour de force after the summer break. 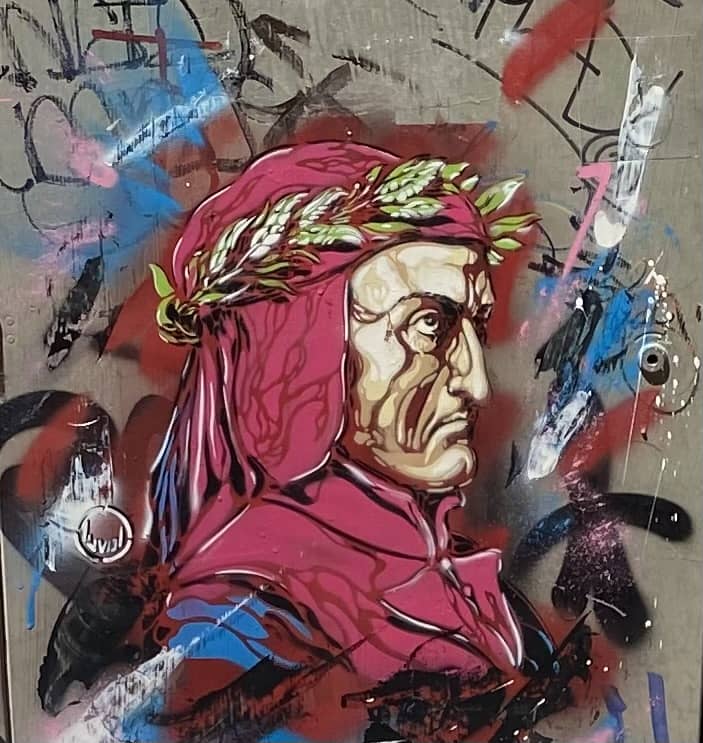 To mark the 700th anniversary of Dante’s death, Milan-based theatre producer Julia Holden, in collaboration with award-winning UK playwright Justin Butcher, is curating a 24-hour marathon live reading in Florence of the whole of the Divine Comedy, in the acclaimed English translation by Robert and Jean Hollander. 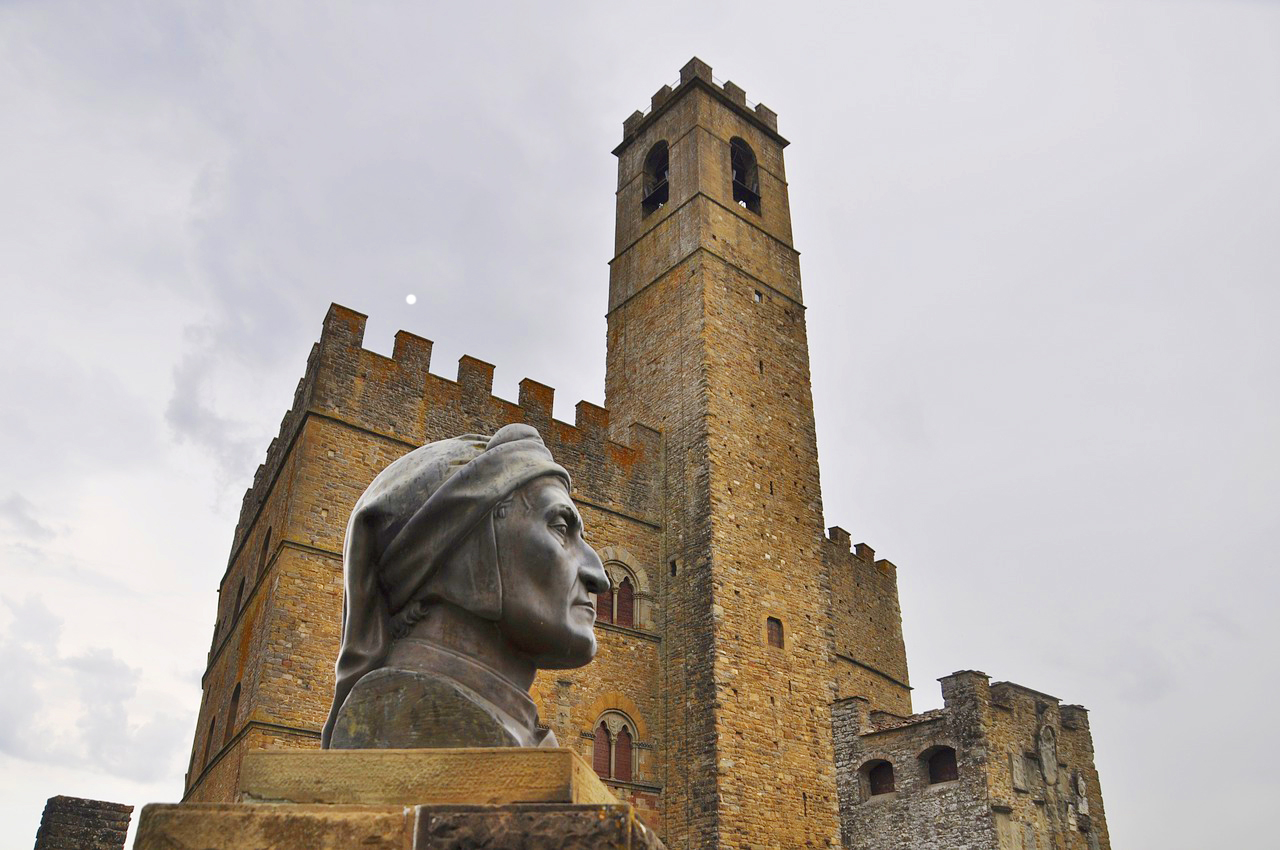 Baptized Durante di Alighiero degli Alighieri and often referred to simply as Dante, the Florentine poet, writer and philosopher stayed true to his Tuscan identity throughout his years spent in exile, mentioning or referring to countless evocative corners of the region in his seminal work, the Divine Comedy.

A visual journey through the Divine Comedy with Timothy Schmalz

Canadian sculptor Timothy Schmalz is the creative force behind an engaging and dramatic upcoming exhibition at the Badia Fiorentina. The 100 cantos of Dante Alighieri’s much-loved masterpiece, the Divine Comedy, will be interpreted in bronze sculptures, 30 of which will be scattered throughout the historic monastery, creating a visual journey through the literary work. 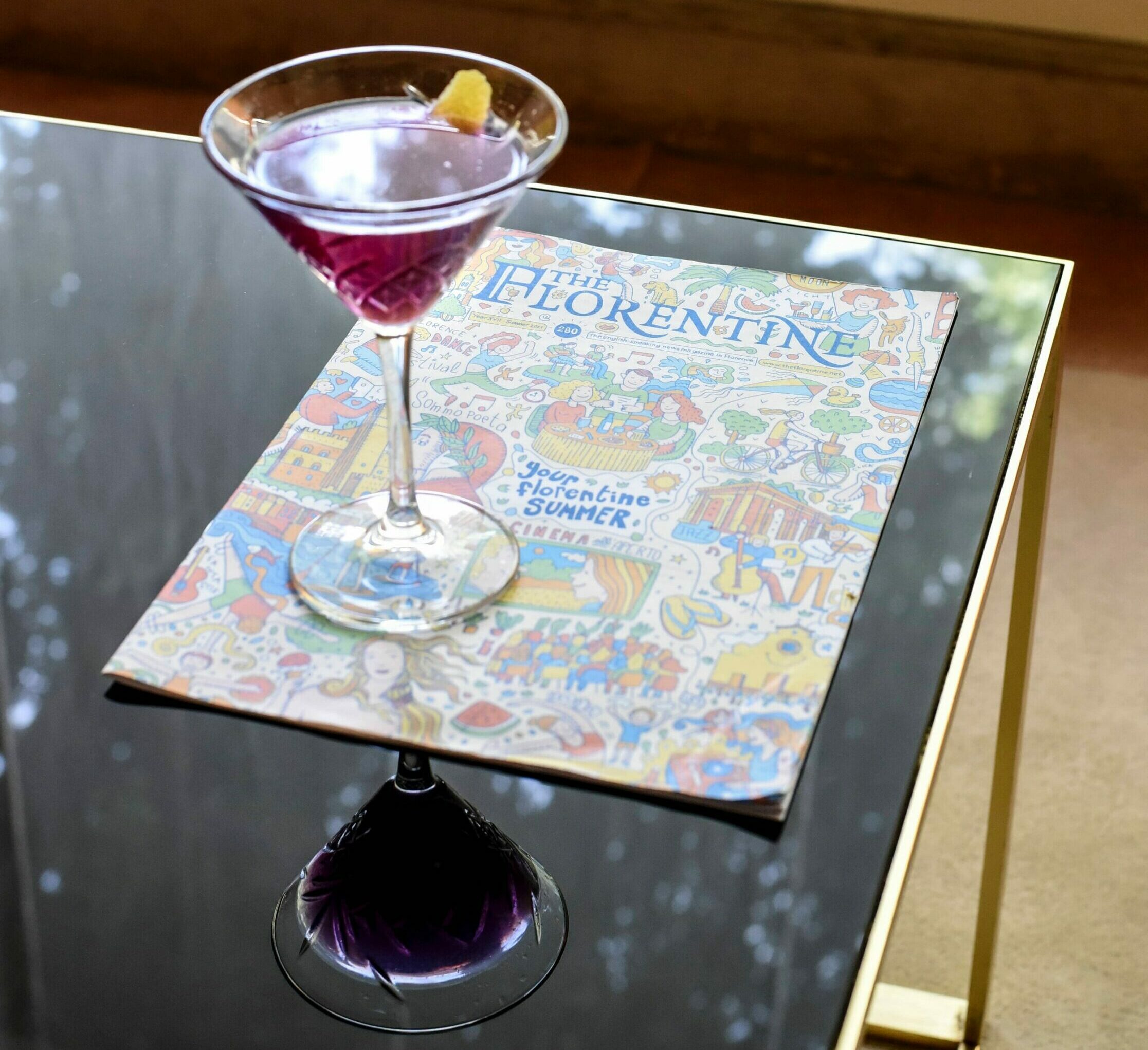 Cocktails make a comeback (not that they ever left)

Quality mixology returns as Florence Cocktail Week resumes a weeklong smorgasbord of shaking from September 20 to 26. A mainstay on the city’s social scene, Paola Mencarelli organized the first showcase focused on fine drinks in 2016. Since then, FCW has gone from strength to strength, and now from region to region as the showcase ventures to Venice later in the year (December 13-19).

The Florentine is on the rocks (but in a good way)

At The Florentine, we’re shaken but not stirred. One thing’s for sure: a well-made drink settles the nerves and what better cocktail than our very own The Florentine! Getting to know the creative team of Harry’s Bar The Garden at top hotel Sina Villa Medici in Florence’s via il Prato sparked the idea to join forces and invent our magazine’s signature cocktail. Cin cin! Tuscany isn’t a region to rest on its laurels when it comes to sustainability in business. The Florentine visits three multinational investors with sites in Tuscany that are striving for a greener future.

New sleeps in the city 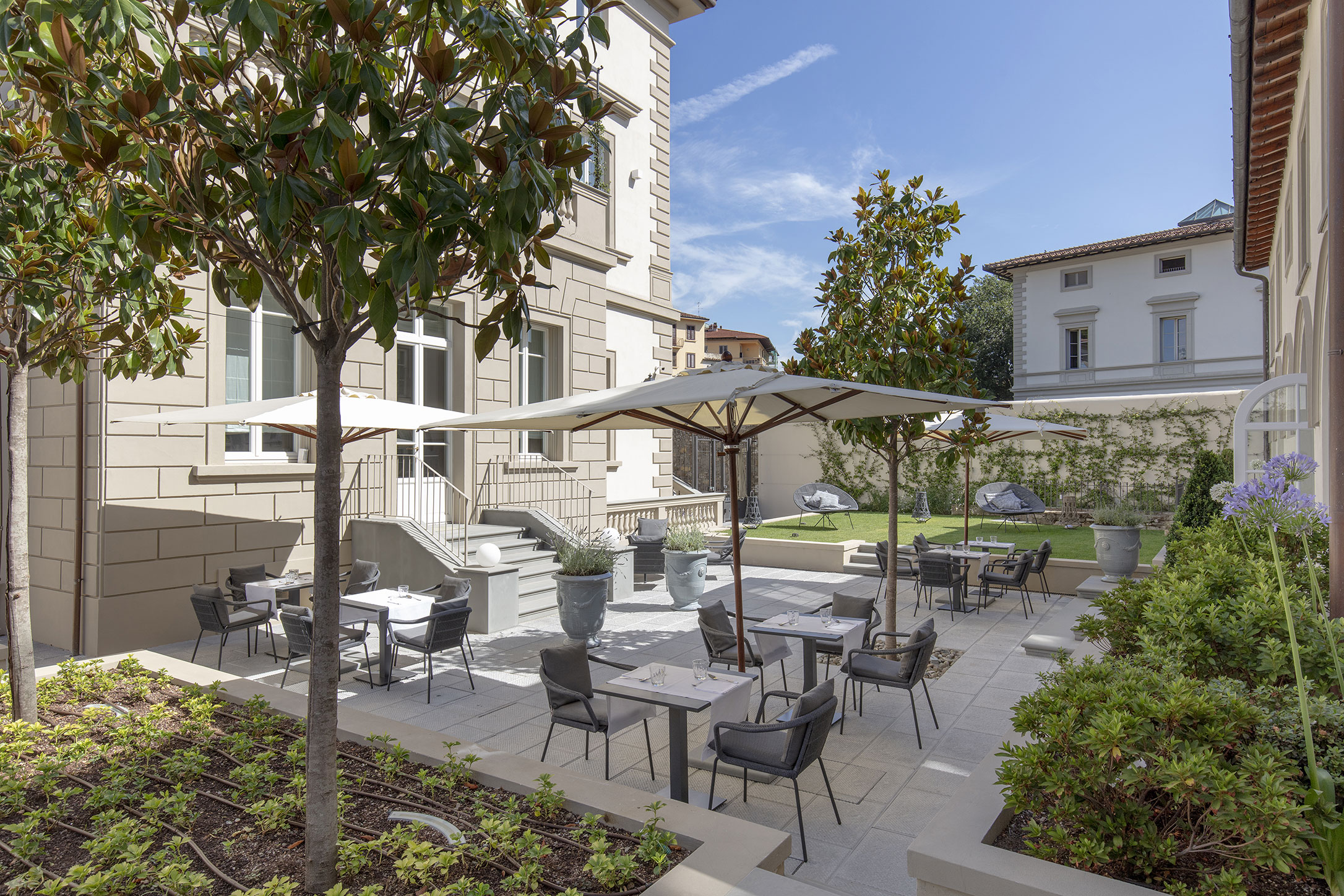 After a sold-out August, Florence is embracing the end of the summer with a flurry of hotel openings (pictured here: Dimora Palanca) destined to turn heads through daring design and playful concepts. On a platform infamous for being contrived and famous for being fun, Instagram is home to a sprinkling of society that varies from the ridiculous to the inspirational. Lisa-Marie Proteau falls into the latter category. Unadulterated honesty about home renovations, mental health and life in Florence (she’s best known for her videos detailing Fiorentinisms) means her following is ever-growing with people magnetised by the uplifting and genuine content.

Talking about jewelry in Florence is sure to conjure up images of golden treasures lining tiny shop windows along the Ponte Vecchio, but that is only a small part of the story. Today, Florence is home to a new generation of jewelers who combine the traditions of top-quality craftsmanship and technical artistry with innovative materials and fresh design perspectives.

Through art, jewellery and events, Marina Calamai’s oeuvre is emotionally impactful yet playful, operating from the belief that, when we laugh, our hearts open to learning.

A Florentine friend, Filippo Ciabatti, now residing in the United States as conductor of the Dartmouth Symphony Orchestra, sent me a photo of myself in the role of American composer George Gershwin on the backside of a bus in central Florence. The advert shared that I would be appearing at Fiesole’s Teatro Romano with Gershwin and his ‘Rhapsody in Blue’ to close out the season on September 14. I asked him where he got such a thing. “Once a Florentine, always a Florentine, and news travels fast!”

For five days between September 20 and 25, several major Florentine cultural organisations will celebrate the 90th birthday of Sylvano Bussotti, one of the city’s most multitalented native sons, a composer and performer, artist, writer, actor, director, set and costume designer.