For Fiesole: performing Gershwin at the Roman amphitheatre

A Florentine friend, Filippo Ciabatti, now residing in the United States as conductor of the Dartmouth Symphony Orchestra, sent me a photo of myself in the role of American composer George Gershwin on the backside of a bus in central Florence. The advert shared that I would be appearing at Fiesole’s Teatro Romano with Gershwin and his ‘Rhapsody in Blue’ to close out the season on September 14. I asked him where he got such a thing. “Once a Florentine, always a Florentine, and news travels fast!” I had been alerted that such a thing was going to happen. Still, this photo that crossed the sea and returned was my first view of myself as Ataf’s rear end—and what a thrill it was—but why and how it got there in the first place has its roots in the magical and sometimes heart-rending history of Florence.

Three years ago, when I first took up residence in Florence, which would quickly become home, Trevor Hay, the man who directs my theatrical plays in the United States, was here to rehearse an upcoming show. While I knew Florence’s centre quite well from previous visits, I had never been to Fiesole. Trevor, however, had been some years before and he insisted that we take a break from rehearsal to go to see “an amazing Roman amphitheatre”.

We took the back way up from where I live in Bagno a Ripoli, floating over Tuscan hills, valleys of olive orchards to one side, farmhouses and castles to another, sprinkled here and there among grapevines and the majestically towering cypress trees. Breathtaking is an expression easily used as an adjective, but in this case it describes a physical reaction to the singular beauty experienced at every turn.

As we arrive on the edge of Fiesole, the road compresses and homes painted a distinct yellow suddenly flank us on both sides, with just enough space between them for a single vehicle to pass through. Just as abruptly as the houses appeared, they open their arms and allow us entry into the historic centre, the piazza Mino. Fiesole dates back some 3,000 years, early on an independent Etruscan city, later a competitor of Florence, and eventually a getaway for Florence’s wealthy as well as a hub for international education. But something happened on that piazza and its various arteries in early August of 1944, which has haunted me from the moment I learned of it. 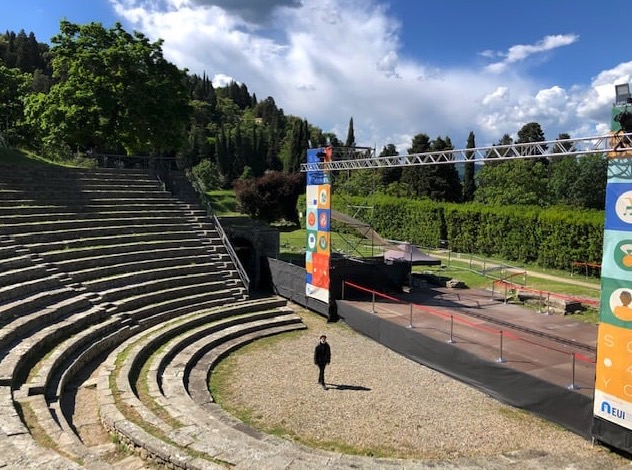 Hershey Felder checks out the stage at Fiesole’s Teatro Romano ahead of his show there on September 14, 2021

It was August 11, 1944. Four Carabinieri, Alberto La Rocca, Vittorio Marandola, Fulvio Sbarretti, and their commanding officer Francesco Naclerio, were ordered to leave their barracks in Fiesole to join the effort to liberate Florence from the Nazis. As the secret partisans began to make their way down the hill, they found themselves under threat and were forced to hide among the ancient ruins of the Teatro Romano, the 3,000-year-old Roman amphitheatre just to the right of the piazza.

Several days prior, however, a Nazi soldier had been killed by Italian partisans in San Gimignano. The law at the time was that if one German was killed, ten Italian civilians would be made to pay with their lives, so ten Fiesolans had been rounded up and held hostage in the Hotel Aurora left of the piazza, where they awaited execution.

The next day, August 12, Nazis stormed the Roman theatre looking for the Carabinieri who, they had been informed, had left their barracks. Their threats carried throughout the amphitheatre: any partisan found hiding would be liable for the deaths of the civilians being held across the way. The Carabinieri immediately offered their lives to save the lives of their ten countrymen. The chief officer was sent off to a labour camp and the other three were dragged across the piazza, taken into the courtyard of the Hotel Aurora, and with the ten hostages present, shot at point-blank range. The ten civilians were not immediately released, however. They were held for another three weeks before eventually being let go.

We parked our vehicle in the centre and I couldn’t help but stare at the Hotel Aurora. Even though the piazza was lined with outdoor dining places and visitors, all I could see and feel were the Carabinieri being dragged across the way. We turned to the right and found ourselves in front of the Roman columns and stone arches that formed the entrance to the amphitheatre, a picture window to the mystic magic just beyond.

Down the ancient stone steps we went, glimpsing the millennia-old remains of an Etruscan temple. To the lower right, remains of Roman baths can be seen, with sections for cold (frigidarium), warm (tepidarium) and hot (calidarium), all perfectly set into the rolling hills with the cloud-dappled blue Tuscan sky as backdrop. To the immediate right is a vom, the “vomitorium”, a funny word describing the area where the actors are “wildly released” onto the stage—in this case, a semi-circle at the bottom of several thousand-year-old stairs and seats. A number of them are still original, with some having been restored in the 19th century. Despite all this, I can’t help but imagine the Carabinieri hiding among the ruins and the Nazis standing in the seating area, German Shepherds barking, viciously threatening. 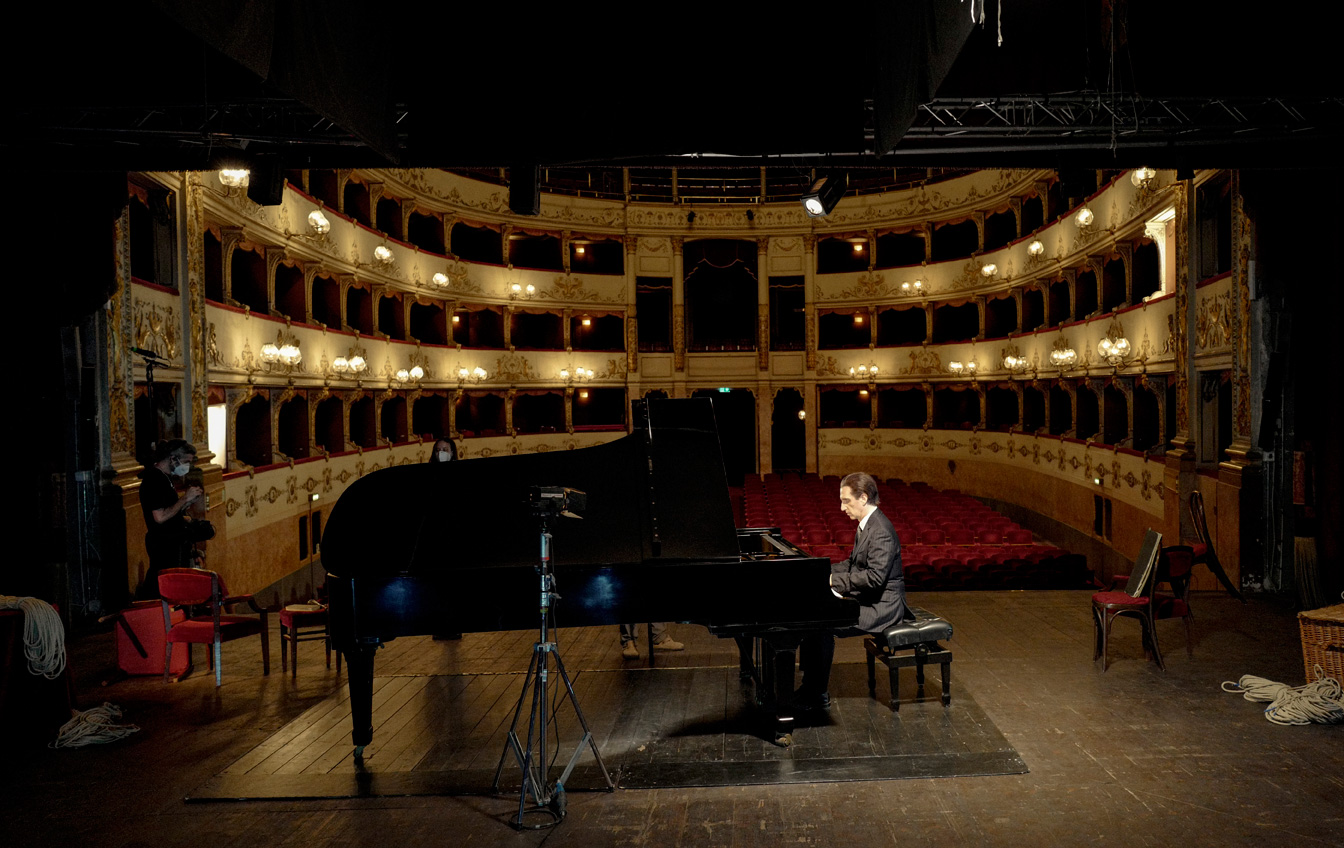 Hershey Felder performing George Gershwin Alone in live streaming at Florence’s Teatro della Pergola. The performance on September 14 in Fiesole will be Felder’s first performance in Italian (the songs will remain in English with Italian subtitles) | photo by Marco Badiani for The Florentine, September 2, 2020

I walk down onto the platform and look up. The genius of the construction lies in its intimacy and pure acoustics. I imagine a full crowd, 3,000 people, and they are all there for you to share a story and some music as if they are in your living room.

Three years almost to the day after my first introduction to the magnificence and history of Fiesole and the Teatro Romano, I am due, on September 14, to tell a story and share some music on that very stage, with George Gershwin Solo, a play featuring his songs, story and music, including the entire beloved and well-known ‘Rhapsody in Blue’. In August of 1944, George Gershwin, a Jewish man and son of Russian immigrants would likely have not been allowed to live had he been here then. I cannot help but think of the mind-bogglingly heroic Italians who gave their lives for their civilian countrymen. And as often as I fall in love with Italy and its people, this particular story elicits a visceral reaction just to be accepted even to stand on that stage, to tell such a story and honor the great Italian heroes, and spirits of the men who did the unimaginable, freely giving their lives to save those of fellow countrymen.