Botticelli masterpiece up for auction

Sotheby’s to auction The Man of Sorrows.

One of the last Botticelli masterpieces still in private hands will take centre stage in Sotheby’s Masters Week sales series in New York in January 2022 with an estimate in excess of 40 million dollars.

Painted in the late 15th/early 16th century, The Man of Sorrows is a masterful late period work by the artist when Botticelli was influenced by the Dominican friar Girolamo Savonarola and adopted a style characterized by Christian symbolism and visionary spirituality. The portrait of the resurrected Christ reveals an important coda to Botticelli’s well-known earlier career, while also encapsulating the artist’s singular style with a modern and human portrayal of Christ.

Despite the landmark sale earlier this year, works by Botticelli remain exceedingly rare at auction. His late works in particular seldom appear on the market, with only three other works from this period (post 1492) known to be in private hands.

“To bring to auction a work by Botticelli of this quality is a major event in the world of Old Masters, but to do so a year after the landmark sale of Botticelli’s Young Man Holding a Roundel is a once-in-a-generation phenomenon,” commented George Wachter, Sotheby’s chairman and co-worldwide head of Old Master paintings. “This extraordinary painting is a prime example of what makes Botticelli such a captivating artist: a bold visual style coupled with a singularly human approach to portraiture. In taking what is a rather difficult and somber subject matter of Christ following his persecution, Botticelli creates a deeply complex and moving portrait that is truly timeless.”

The Man of Sorrows was unveiled in a public exhibition in Hong Kong from October 7 to 11, where interest in the artist has reached an all-time high at Sotheby’s and the wider arts scene. Botticelli’s record-breaking Young Man Holding a Roundel was underbid by an Asian collector and last year, an exhibition of the artist’s work at the Hong Kong Museum of Art received wide acclaim (Botticelli and His Times – Masterworks from the Uffizi, opened from October 23 until February 2021). Following the exhibition in Hong Kong, The Man of Sorrows will embark on a global tour to Los Angeles, London, and Dubai before returning to New York for a pre-sale exhibition in January. 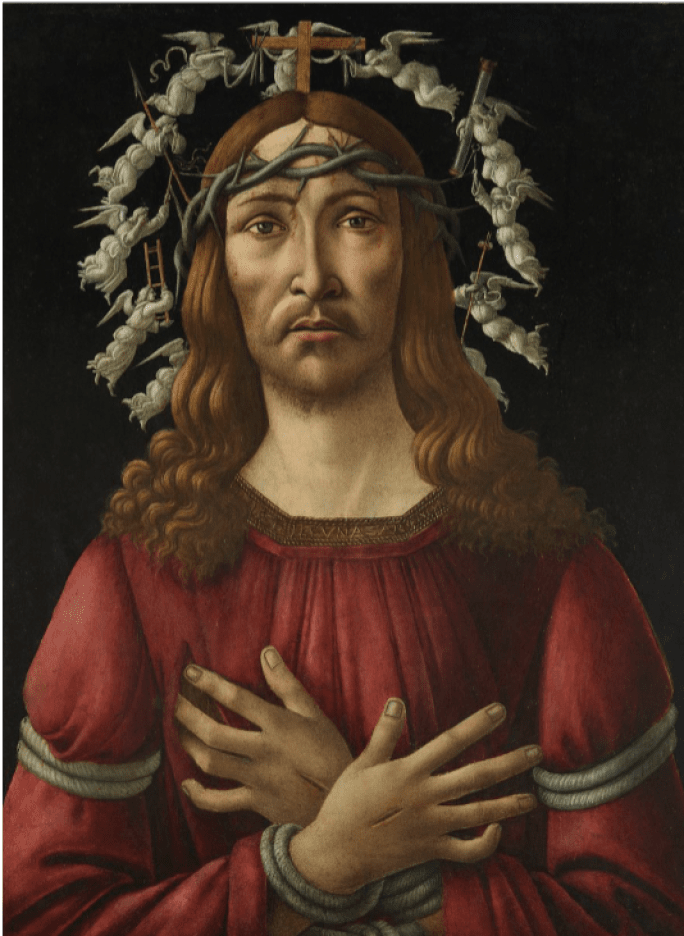 Botticelli’s ‘The Man of Sorrows’

About Sandro Botticelli’s The Man of Sorrows

A defining example of his late career, The Man of Sorrows is a representation of the changes in Botticelli’s style and subject matter in the late 15th to early 16th century. As opposed to his poetic mythological scenes such as the Birth of Venus and Primavera of the previous decade, Botticelli’s output from the 1490s and onward is more sober, austere and spiritual in nature, as exemplified in the present work and his Mystic Nativity of 1500 in the National Gallery in London. This stylistic departure is likely dictated by the shifting political and religious climate in Florence.

In 1494, Florence was invaded by foreign armies, the Medici family was expelled and fears of an apocalypse at the turn of the half-millennium were fueled by the preaching of the Dominican friar Girolamo Savonarola (1452–98). Appointed Prior of San Marco, the convent favored by the Medici, Savonarola grew in power and popular appeal. A charismatic preacher, he railed against the sin and iniquity of the people, becoming a religious dictator. He declared Florence a new Jerusalem, demanded that the citizens purge themselves of sin and instigated the Bonfire of the Vanities, on which were burned luxury objects, clothing and paintings considered idolatrous. According to Giorgio Vasari, Botticelli himself felt so chastened by Savonarola’s sermons that he consigned a number of his own paintings, feeling them to be impure, to the flames.

Eventually the Signoria, Florence’s ruling council, arrested Savonarola, tried him, made him confess to being a false prophet and, on 28 May 1498 had him hanged and burnt as a heretic in piazza della Signoria. Vasari’s claim that Botticelli never painted again after Savonarola’s death is untrue, but undoubtedly Botticelli fell under the friar’s influence and his teachings had a direct effect on his art. Certainly, the central message conveyed by the Man of Sorrows is Christ’s conquering of death and his resurrection, while its stark composition underscores Savonarola’s message of a return to the fundamental tenets of the Christian religion.

The painting’s most distinctive features are the strictly frontal presentation of Christ and the halo of angels holding instruments of the Passion painted en grisaille, a painting technique by which an image is executed entirely in shades of gray and usually severely modeled to create the illusion of sculpture. Covering their eyes in a variety of gestures conveying their grief over Christ’s suffering, angels orbit around Christ’s head against a solemn black background. The close-up view presents the head and torso of Christ after his deposition from the cross; his wounded hands are crossed over his breast; and the viewer is invited to contemplate his sacrifice. At the same time, the directness of the image, above all the piercing quality of Christ’s gaze, evokes secular imagery and gives it the singularity of a portrait. Botticelli renders the dual nature of Christ’s humanity and divinity by bringing remarkable psychological depth to the image. Christ is shown half-length, displaying three wounds: those in his hands from when he is nailed to the cross and the wound in his right side inflicted with a lance by one of the soldiers after his death. Angels bearing the Arma Christi, or instruments of the Passion, encompass his head. Symbolizing Christ’s sufferings and death, the objects painted by Botticelli in naturalistic colour and meticulous detail are, on the left: the ladder that features in the Raising of the Cross and the Descent; the scourge used to flagellate Christ; and the lance with which he was stabbed; and on the right: the column to which Christ was bound and flogged; the pincers used to draw out the nails; and the sponge soaked in vinegar and fixed to a cane that is offered to Christ before his death. Crowning the design at the top is the cross, which is prominently positioned above Christ’s head as a symbol of his sacrifice but also as the emblem of the Christian religion. A trio of angels connected by the elegant serpentine lines of ribbon-like cloth is arranged around the cross: the central figure kneels in reverence before it, holding it respectfully with draped cloth; the one to the left holds up the three nails used to fasten Christ’s hands and feet to the cross; and the angel on the right lifts one end of the cloth that loops across all three – the sudarium, or veil, used by St. Veronica to wipe the sweat from Christ’s brow as he bears his cross to Calvary.

The Man of Sorrows was first recorded in the collection of Mrs. Adelaide Kemble Sartoris (1814-79), a famed English opera singer, who along with her husband, were two influential socialites in Victorian England and in Rome. The painting descended in the family to Adelaide’s great granddaughter, Lady Cunynghame, who sold it at auction in 1963 for £10,000 ($28,000). Since then, it has remained in the same distinguished private collection, practically unseen until its recent inclusion in the major monographic exhibition devoted to the Florentine master at the Städel Museum in Frankfurt in 2009–2010.