Insta-interview with the Peruvian American artist and designer

People talk about a ‘room with a view’ to an almost exhausting level (inevitable in Florence), but when faced with Brunelleschi’s Duomo at what feels like a touchable distance, how can you not feel breathless from beauty? The creator behind one of the most covetable spaces in the city, Peruvian American artist and designer Danella Lucioni, reveals the backstory to the most “liked” Airbnb in Italy in 2020 “Window to the Duomo” and her Antelux apartments and Astrum Penthouse. As Danella’s rescue cat Apple (insta-famous in his own right @the.florence.kitty) purrs from a white sofa and a breeze flows through the well-known window, we chat about the thirteenth-century building and the carefully curated atmosphere.

Jane Farrell: How did you end up in Florence?

Danella Lucioni: I studied abroad, like so many. I didn’t think about it too much. I was 19 and my school offered three choices: Paris, London or Florence, and I felt a connection to Italy because I have Italian ancestors. Afterwards, when I was back home, I would see a picture of piazzale Michelangelo and my heart would skip beats, like a former lover that you never got over. I felt like I needed to finish what I’d started so 9 years later I bought a one way ticket and jumped into a new life in Florence.

Ardium is the studio with a spectacular view of the Duomo that’s specifically for solo travellers. There’s a practical element to that, given the size of the space, but are there any other considerations or values behind that decision?

This space evolved: first, it was because of the size, but I could technically sleep three people here. I don’t want people to be distracted when they visit. I’ve had people cry when they would tell me about their stay, saying that their time here alone was like a recharging, almost like a transformation. I didn’t put a TV here on purpose or any sort of entertainment, except books and painting supplies.

Are you spiritual in any way?

I’m not religious and I’m not interested in horoscopes, but I highly believe that there’s an aura here. I sound like a total hippie now, but I’m not the only one who has felt it. There’s just something beautiful about the energy. This building is from the 1200s and I can’t imagine all the things that have happened here: Leonardo da Vinci lived in this street, Dante probably walked past here. I don’t think that the Renaissance happening in Florence was a mistake. There’s some sort of energy that brings people together. I know many people who moved here after they came to visit because they just felt like they were being called.

You’ve shared this ambience with people by allowing them to come here and take pictures. What has been the reaction to that?

Some people, and I can feel it, just come here for the “likes”, to get clout for social media. But for the most part, the people I’ve allowed up (because I hand-pick them) come here and really take it in and are blown away by the view and the beauty of the Duomo.

Antelux is the larger space on the second floor (all of the apartments are in the same building) that has recently been launched as a “dynamic” B&B, two apartments that can be combined into a larger one. How did that come about?

I was living in the building and my neighbour on the second floor had a dentist’s studio, which it has been since the 1800s. When the owner retired, I made an offer. I wanted to bring this place back to its former glory and I wanted to keep its soul. Florence should be protected, so I kept every single thing, as much as possible. The bedrooms face the Duomo, and from the other windows and balcony you look at the Baptistery. I was working on the wall and I accidentally discovered a fresco! The dental practice had been lightly renovated in  the ‘70s, but not since then so we started uncovering artefacts from the 1800s and then I added a lot of pieces that I got from my antique vendors and that I found in local markets like in piazza della Libertà, Santo Spirito, Sant’Ambrogio and Arezzo. I did a lot of the work myself, as I started in January 2020 and then the pandemic hit. We had to replace all of the shutters, but I couldn’t bear to throw them out, so I turned some into a closet and another set into a bed frame. I also made a piece of art from the Murano glass of the old windows, and I designed and created the olive wood countertops. I call these “dynamic” apartments because I plan to use them for events like pop-up dinners, micro weddings, photoshoots, classes and art exhibitions involving local artists. I really want as many people as possible to be able to use this space.

How did you choose the name Antelux?

The name Antelux came around during the pandemic because I was in a very dark place. During the pandemic, even if it was peaceful sometimes, it was eerie how empty the piazza was and the sound of silence was shocking. I could hear a pin drop and I could hear the windows rattle from the bells ringing and the lack of people. Ante means “before” in Latin and lux means “light”, so it was “before the light”. I knew that eventually we would get out of it, but we were not there yet and I was in the dark. Now, it feels like we’re almost outside the tunnel. So many of us had dreams that were crushed or halted, and there was a feeling of collective depression, but yet there was hope, and I would look out the window and think about how the Renaissance happened here for a reason: we can have a Renaissance 2.0.

Social media thrives on spectacular settings such as this, but the truth behind them can often be so different. Where does the over-exaggeration of beauty become an issue and where does over-criticism become an issue as well?

I know there are a lot of people who will look at Instagram and TikTok and think, This is amazing, I’m moving to Italy, especially when they look at mine and see how I fell in love with the Duomo. I tell all my friends who want to move to Florence: you will be cleaning toilets, you will be babysitting kids until there’s no tomorrow, you will be doing random jobs until you can get on your feet. Nobody paints that picture of those who come here and don’t get the career you imagined. You have to work from the ground up, especially when you don’t know the language. You can, of course, do remote work and there are a certain number of jobs available when you start off. I was selling water bottles right under this window! When I first moved here, I was embarrassed and I didn’t want to tell anyone about what I was doing here because I thought people would think, This model from LA came over to make it big and look what she’s doing, but now I talk about it because it’s something that I’ve overcome. If you move to Italy by yourself, you need grit to make it work. People like to romanticize Florence, totally understandable because how can you not? There’s good and bad in every city and you basically have to choose what “good” is good enough for you and what “bad” is not too bad for you. 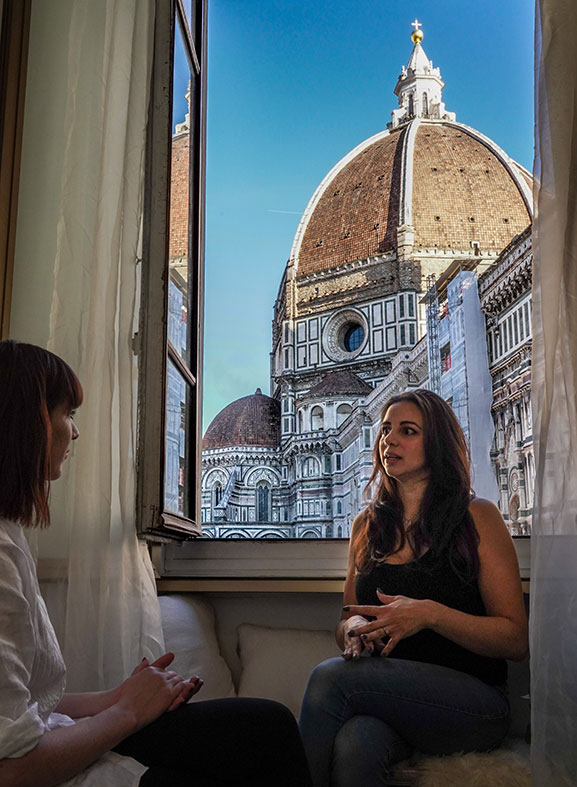 Do you have a favourite Florentine?

All the Florentine women who are fighting to change society and their city for the better, who have purposely stayed to make Florence a better place.

Well, I’m extremely biased to say my studio, but the other place where I’m happiest in Florence is up at San Miniato. That’s where I find peace.

Favourite place to visit in Tuscany?

The places where I haven’t been yet! I have so much still to discover.

Favourite place for an aperitivo?

I like to have picnics at the Rose Garden. 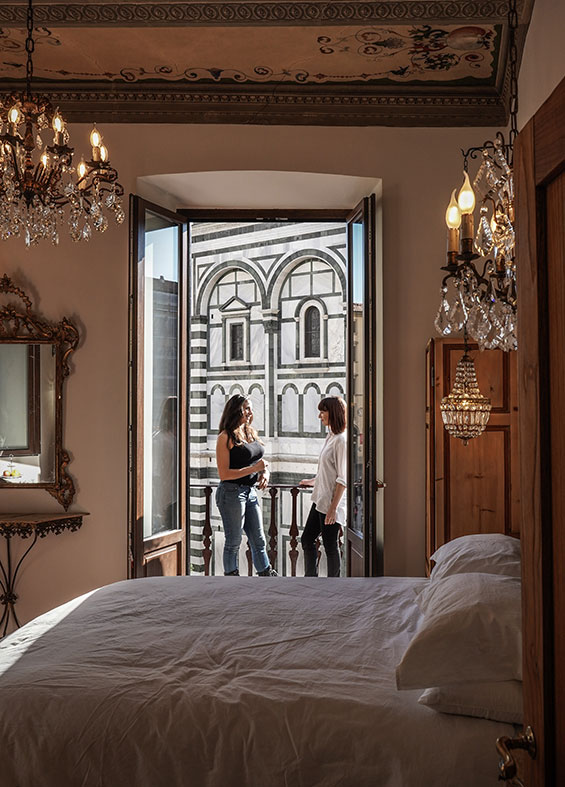 Join us on The Florentine's Instagram at 5pm on November 9 for an IG live with Danella Lucioni.

From books to candles, experiences and wine

Welcome to the festive season in Florence

Best events in Florence this December, 2021

Our top picks for the month of December