Christmas in Florence is always a magical time of the year. Here’s the line-up of events organized by the City of Florence in December 2021. 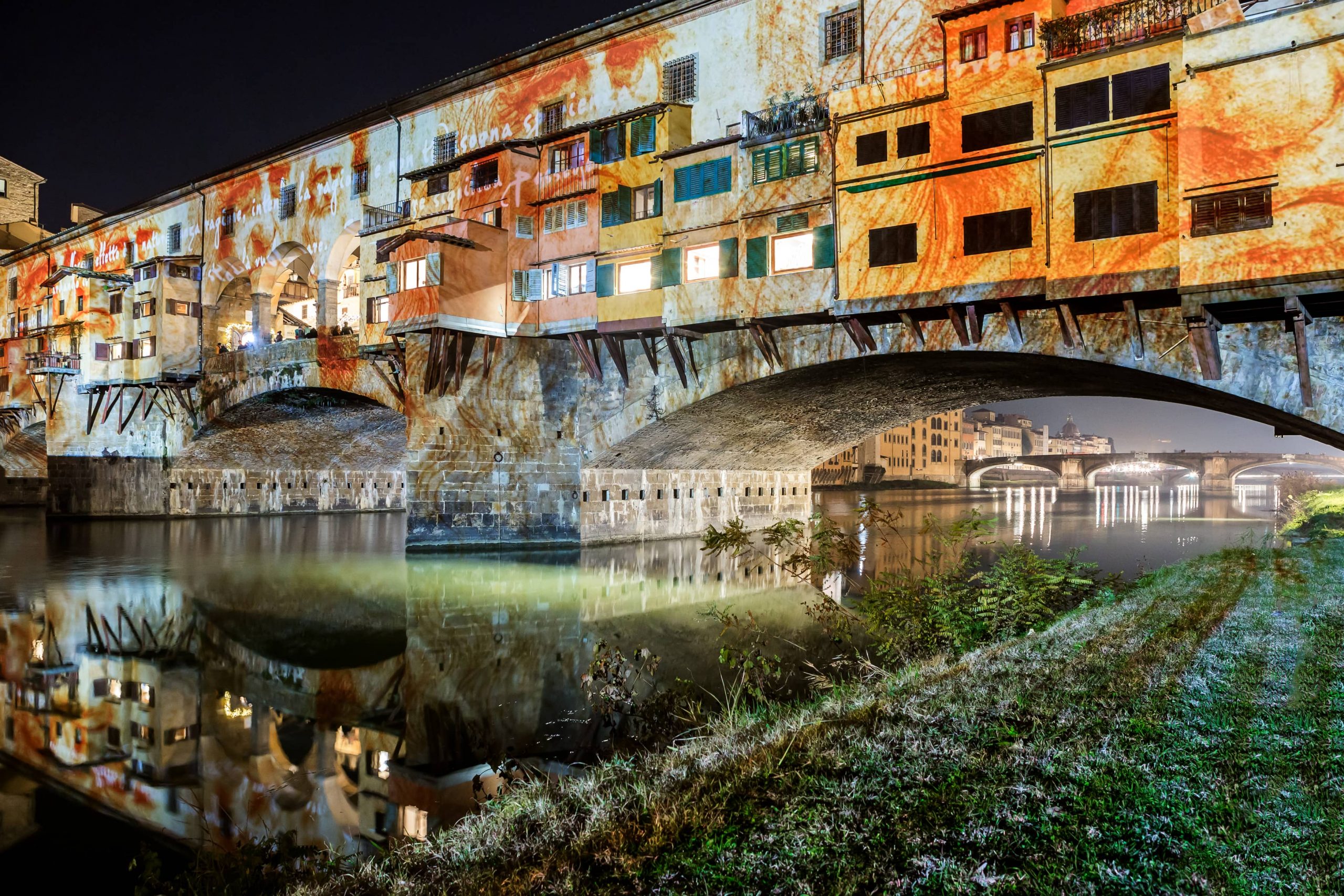 Now in its sixth consecutive year, F-Light is one of the most significant artistic light festivals in Europe.

Reflections is the title of this year’s edition of Florence’s festival of light, which is promoted by the City of Florence and organized by MUS.E, under the artistic direction of Sergio Risaliti. From December 8 to January 9, 2022, between 17:30 and midnight, Florence will come alive with light installations in some of the city’s most striking locations and piazzas. The much-awaited projection mapping will return to the Ponte Vecchio, while Dante-themed images will shine on the riverside frontages of the Chamber of Commerce and the Galileo Museum. Historical legends will be projected onto the facade of the Basilica of San Lorenzo and humankind’s use of big data and artificial intelligence will shine in piazza Santissima Annunziata. The light will also extend to the residential neighbourhoods, with trees shining brightly in piazza delle Cure and Isolotto, plus stars spreading joy in Settignano and the San Donato park, and a spherical composition in piazza Dalmazia, in addition to the decorations on the city’s gates and towers. Plus, in the Sala D’Arme, at the Palazzo Vecchio, there’ll be time to check out the Wonderful exhibition, curated by Sergio Risaliti and Stefania Rispoli, from December 8 to January 12.

“This year is a time for ‘Reflections’ and mirrors, to look inside and understand who we are and where we are going,” explains Sergio Risaliti. “Reflecting and holding up a mirror to understand ourselves and to recognize who we are among others. Reflections and mirror images from corner to corner, point to point, on buildings and in piazzas. Christmas is also about this spark of lights and reflections. A bit of joy after two years of darkness, in the darkness of the night, which we have known and suffered from during the pandemic. It’s a time of rebirth and change. The lights reflect on the current of the River Arno, a metaphor for flux, of the flow of time.”

This year’s shows are made possible thanks to the support of the Metropolitan City of Florence, with contributions by Florence Chamber of Commerce, Terna and American Express, the banking of Unicoop and EuroAmbiente Green Solutions, and thanks to Firenze Smart. 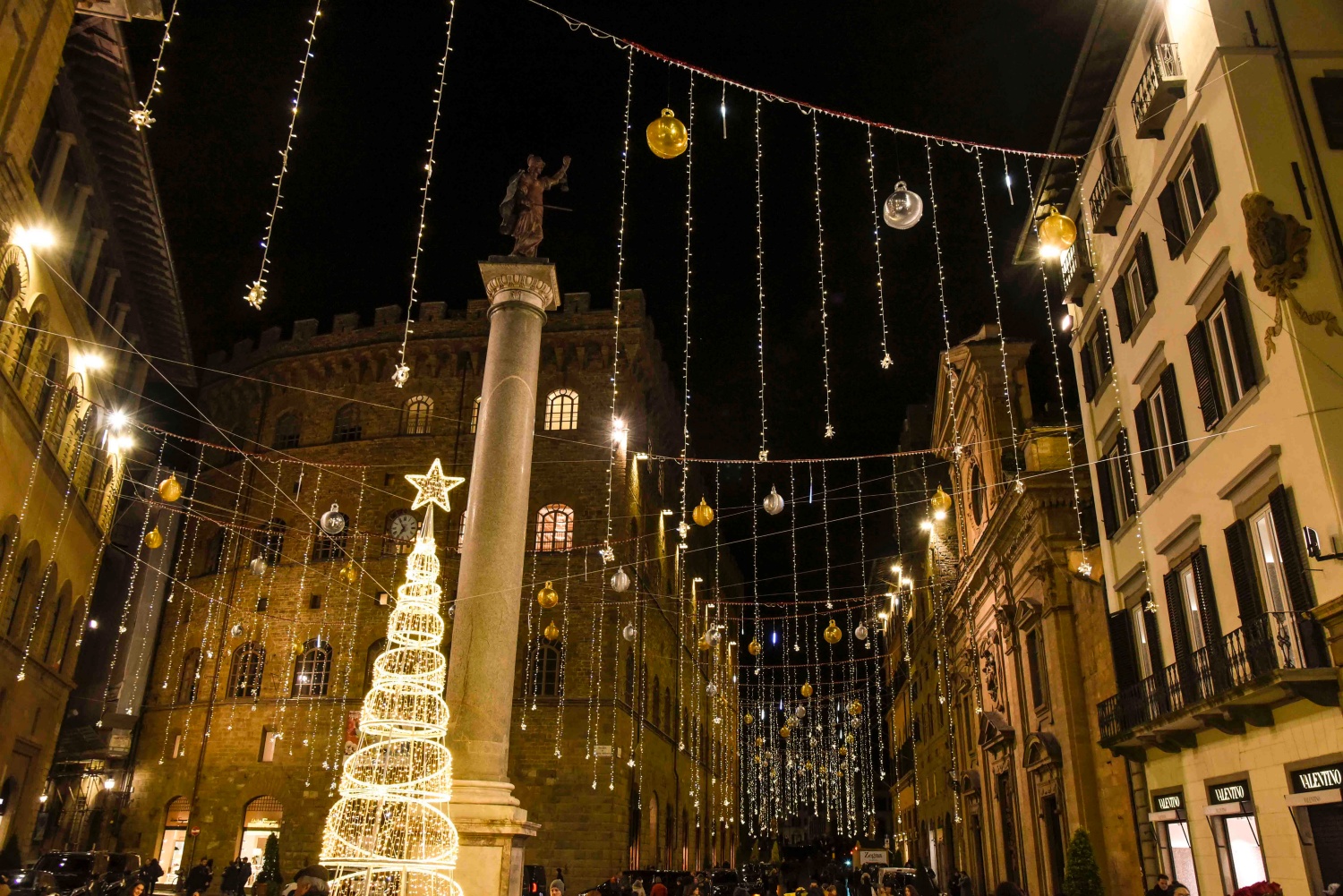 The magic moment when the Christmas tree lights are switched on is anticipated each year. The tree in piazza del Duomo will be revealed in all its glory on December 7 and marks a continuation of the generosity of the Val di Fassa, whose representatives drive the spruce fir down from the Trentino Dolomites. Climb up to piazzale Michelangelo to admire Florence’s lights from above and marvel at the beautiful tree provided by Coldiretti, Italy’s leading farmers’ association. Back down in the historic centre, head to piazza San Firenze for a selfie with the pretty tree outside the headquarters of the Andrea Bocelli Foundation. In shopping central, piazza della Repubblica, be wowed by the light show on the façade of the resident department store, while gazing at the iconic carousel and the tree decorated by the City of Florence. Equally magical are the decorations around San Lorenzo central market and the trees installed in the five outlying neighbourhoods of Florence.

Christmas dates for your diary 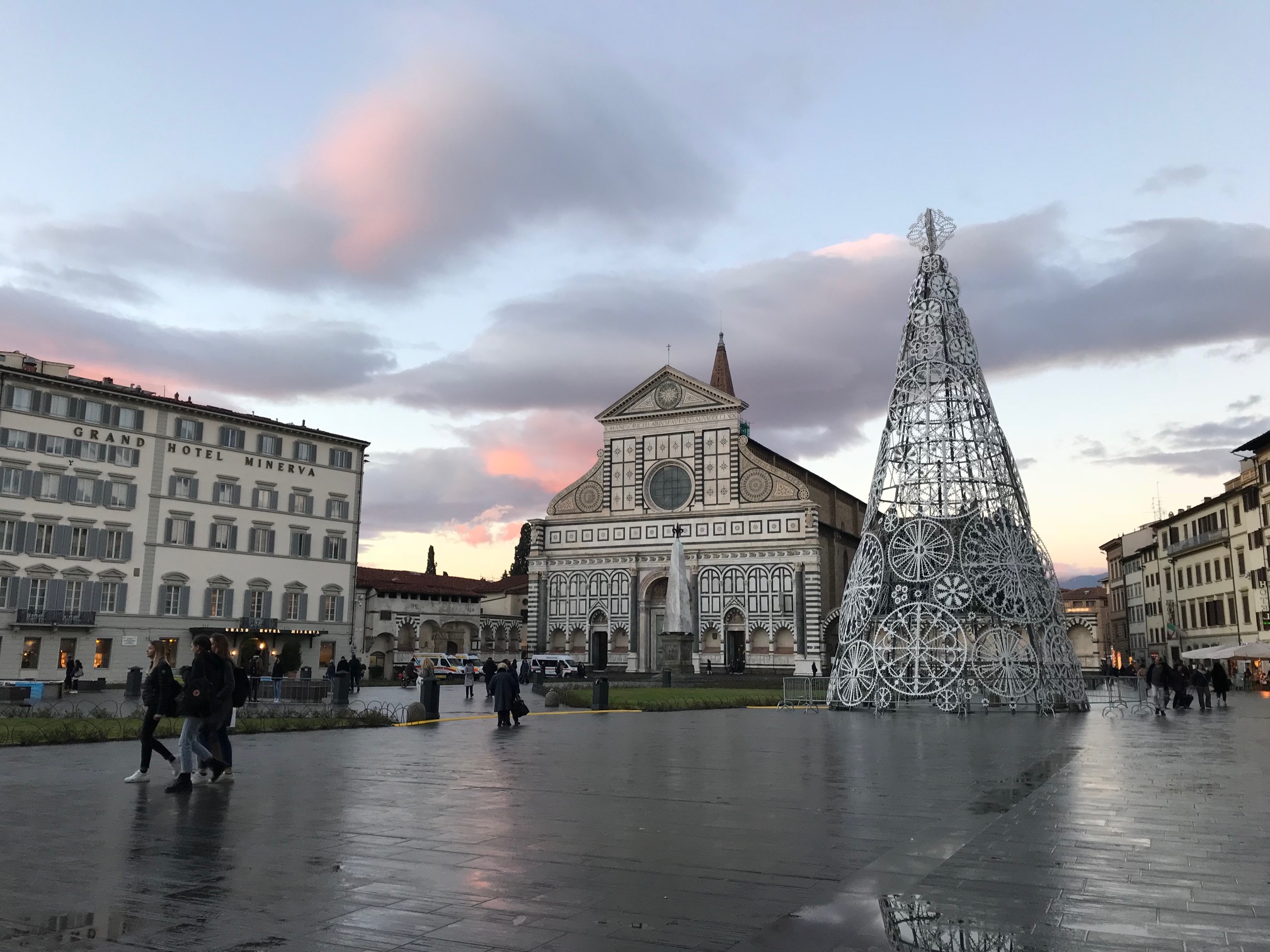 December 8: A group of Father Christmases will perform outside the Palazzo Vecchio

December 15: The Mayor of Florence delivers his Christmas message

Message from the Mayor of Florence, Dario Nardella 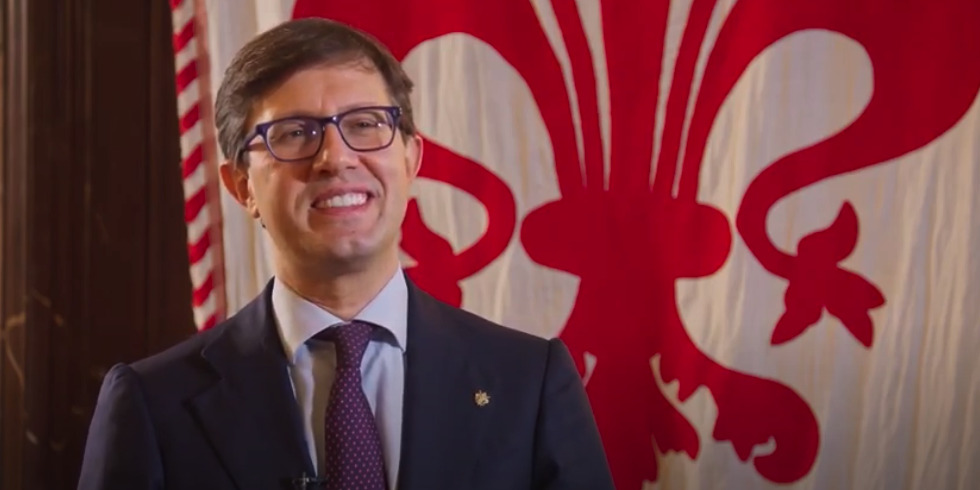 While walking the streets in the city centre, I often ask myself if Florence has gone back to being the way it was two years ago. In 2019, around now, we were gearing up to celebrate a worry-free Christmas and New Year’s. The city was full of holiday lights, people, decorations and markets. We were moaning about the traffic and lack of parking spaces, as Florentines like to do, and we were looking for places to get together with our families and friends over the festive season.

I still like to stroll around the city. The lights are shimmering along the main shopping streets and the light shows of our F-Light Festival are playing on our buildings and monuments.

But something has changed. We can feel it in the air. Two years of living through a pandemic are testing us. We’ve felt moments of terror, hope and doubt. Our mind’s eye is still etched with terrible images of over-burdened intensive care units at the lowest point of the health emergency. Florence was empty and desolate: something we’d never witnessed before. And then the mass vaccination campaign got underway, bringing hope for the future, and slowly but surely we’ve tried to resume leading a normal life. Normal, but not the life we had before. We’ve lost friends and family. We’ve been sick and gotten better. People have lost their jobs or are suffering from psychological duress. And now that the infection rate is going up, yet again we have to summon the willpower not to let down our guard. We cannot allow the virus to circulate again with impunity. It would be an unforgivable mistake to think that we’d left all this behind us.

That’s why it’s fundamental to approach these holidays with awareness and realism. Let’s continue to get vaccinated, believe in science, wear masks and act responsibly to protect ourselves, our dear ones and for our community.

Dear Florentines, tourists, international students and our foreign friends: Florence is ready to welcome you with its lights and joy, but this is still not the time for too much carefreeness. I’m certain that we’ll spend a peaceful Christmas together and avoid the risks as we look forward to a complete rebirth in the near future.