The player in the photo: Jacob Ventura

On November 7, 2020, The Florentine published Francesco Spighi’s iconic photograph of a lone violinist performing in front of the Uffizi, 20 minutes before curfew descended for yet another night. 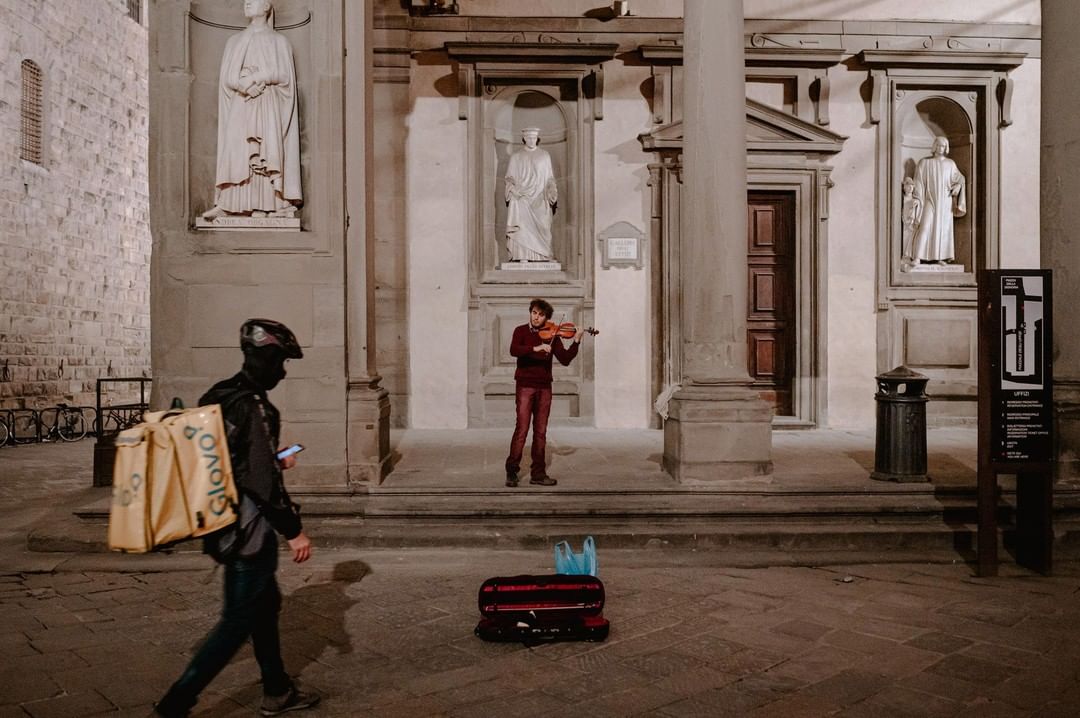 The player in the photo was Jacob Ventura, a professional violin performer who studied at the Royal Academy of Music in London, the Florence Conservatoire and the academies of Fiesole, Lucca and Imola. “In the circles of these prestigious institutes, street performance is not considered right for our professional integrity,” Ventura explains.

Jacob’s earliest experiences of street performance date back to when he was preparing for his final exam after ten years of the Conservatoire in Florence and Lucca. He’d met violinist Asif Anichini playing Bach’s Chaconne in via de’ Tornabuoni at night. “It was a great inspiration to listen to this masterpiece. I started playing with him as a duo and quickly we became friends and colleagues on a new adventure.” While studying for his Master’s in London, the Italian musician performed on the street with Classic Cool, ZHL Strings and Graffiti Classics, as well as with the Spanish guitarist Javi Perez.

“During all these experiences, I was aware of all the perceived ‘risks’ of street performing, but it seemed to be my calling. In fact, every time I dedicated my time, artistry and practice to the street performance, my heart felt full and my body was in perfect resonance with my music. The short performance was planned with a free mind and became a mission to grant everyone free access to the power of violin music.”

Then the pandemic hit and once the lockdown was lifted, Jacob returned to play on the streets of Florence more often. “It was our only possibility of performing live. It became clearer to me that humanity needed music more than ever, despite the fact that musicians were often leaving their jobs or falling into bad forms of depression during that time. From then on, I felt an increased need to provide free music because people needed to connect with themselves and with others more than ever before. I never had so much emotional listening around me before. Music has never been so magical.”

It’s not just about performing for the general public. “Among my listeners, I’ve been appreciated by orchestral conductors John Wilson and Joel Gamzou and the cellist Misha Maisky. Composer Enrico Melozzi has been involving me in his revolutionary projects since 2014 and I’ve been invited to play for a number of private events, including at the Russian businessman Mikhail Fridman’s home.”