Many will remember the story of Renzo in Alessandro Manzoni’s The Betrothed, who sets off to visit the lawyer Azzeccagarbugli in order to seek advice about resolving the situation regarding the boy’s marriage to Lucia. Following his future mother-in-law’s suggestion, Renzo takes a gift of four capons tied together by the feet, with their heads hanging down, because, in her view, “you must never go empty handed to those men.” Manzoni adds that the birds “peck at each other, as too often happens with companions of misfortune”. This metaphor is sometimes interpreted as general commentary on human behaviour or, more specifically, about the Italian inability to agree on a common cause for their future. Perhaps it’s a bit of both. Having initially misunderstood the motive for Renzo’s visit, on realizing his mistake, Azzeccagarbugli throws Renzo out, unceremoniously giving the capons back to him.

Nonetheless, at Christmas, in many Tuscan households, there will be little discussion about the fate of such succulent birds. This is because tradition dictates that cappelletti, or stuffed pasta shaped like medieval hats, should be served in capon broth and then the boiled meat be served as a main disk with vegetables. But the capon also lends itself to other delicious recipes like those in Pellegrino Artusi’s La scienza in cucina e l’arte di mangiar bene (Science in the Kitchen and the Art of Eating Well). These include Capon Galantine and Capon Cooked in a Bladder, which after at least four failed attempts Artusi managed to master by using a pig’s bladder, reassuring readers that it will “withstand the heat better than a cow bladder”. Capons can also be served as a roast.

The origin of the word capon comes from the Latin word, caponem, meaning a cockerel or rooster that has been neutered or castrated to improve the quality of the meat. Capons are usually born around March and are castrated towards the end of August in order to reach their peak weight and taste by Christmas. In the Emilia Romagna region, the tradition is to castrate the young birds on August 16, the feast day of Saint Rocco. After the procedure, the plumage becomes bright and shiny, while the heads grow smaller than a rooster’s; the legs and feet are thinner; and the birds form what is known as a tender “goose skin”. 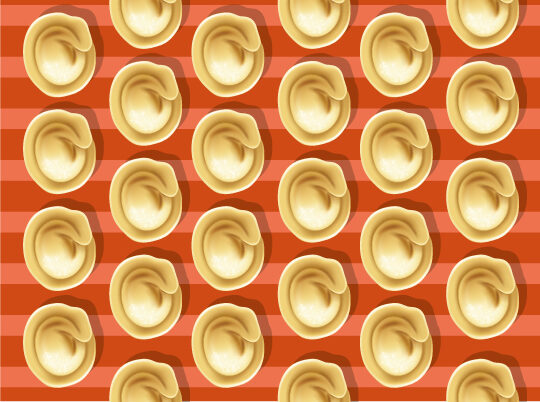 Castrating roosters has been practised since antiquity in China and in Ancient Greece and Rome. This was probably initially done because of the difficulty in trying to keep more than one rooster in the same henhouse because of their aggressiveness. Also, rooster meat becomes tougher and less tasty as the bird ages, whereas a capon’s meat remains fatty and moist. In Ancient Rome, rearing capons circumvented a law that prohibited keeping chickens inside the house. By the 17th century, in his play As You Like It, Shakespeare tells us that when man reached the fifth of the seven stages of his life, he had acquired wisdom and was rich enough to afford to eat capons. This is why they also became prestigious gifts for lawyers, priests and doctors for those, like Renzo, who were seeking favours. In the rural world, they were often considered part of the rent that peasant farmers annually owed their landowners. The composer Giuseppe Verdi, for instance, carefully recorded the number of capons due to him each year in his account books. As testified by Manzoni, at that time, raising four capons in Milan was commonplace because one bird was to be eaten on the feast of the city’s patron, Saint Ambrose, another for Christmas, a third for New Year and the last for Epiphany. Pomegranate seeds often decorated the tables where the capons were served as symbols of prosperity and fertility.

The marketing of poultry meat, including that of capons, is strictly regulated by the European Union, whereby only roosters that have been surgically castrated before reaching sexual maturity, with a minimum weight between one and one and a half kilograms (corresponding to an age of between 45 and 60 days) and slaughtered at a minimum age of 150 days, can be sold under the label of “capon”. Once castrated, the capons must be fattened for a minimum period of 77 days. Although some sources report that caponization is illegal in the United Kingdom and in Australia on animal welfare grounds, others maintain that it is only the hormone treatment of roosters that has been illegal since the 1960s. It seems that surgical caponization is still legal, but it has fallen into disuse in some places because the skills to do it have been lost. Nonetheless, capons are available in the United States and widely throughout Europe, not only in northern and central Italy, but in Spain, France, Austria and Slovenia, where they are traditionally served in many homes on Christmas Day.