Mozart and Figaro in Vienna: a sumptuous new musical play by Hershey Felder

Imagine two hours of operatic entertainment interspersed with humour in the comfort of your own home: that’s what Canadian creative genius Hershey Felder has achieved in his latest (and perhaps greatest) musical film to be shot entirely in Florence.

Mozart and Figaro in Vienna begins with a dusty scene set in the only Italian bookshop in 1830s New York City, which was actually filmed at Florence’s palatial and private art gallery, the Bellini Museum. A theatrically aged Felder plays Lorenzo Da Ponte in his twilight years, who was “Italian poet to the Emperor Joseph the Second” and the long-overlooked librettist of Mozart’s three operas, The Marriage of Figaro, Don Giovanni and Così fan tutte. The action quickly switches to the film’s other Florentine location, the grandiose, riverside Palazzo Gianfigliazzi Bonaparte, whose impressive original parquet floors, gilded mouldings and entrancing natural light conjure up the late eighteenth-century imperial palace in Vienna.

“Florence is our film studio home,” Felder explained to The Florentine. “Florence has provided our films both with original historic locations particular to Florence from Tchaikovsky’s actual Florentine residence to real locations of Dante’s Florentine life, to Czarist Russia, Puccini’s operatic settings and more. With Mozart, while certain interiors were to be filmed in our base in Florence, The Kaiser’s Palace in Vienna was on one of location schedules. With complete lockdown in Austria, this became impossible—and as can only happen in Florence, Maria Maestrelli de Hagenauer, owner of the Palazzo Gianfigliazzi on lungarno Corsini opened the Palazzo to us to serve as the Kaiser’s palace. The location came upon its designation as a Mozart environment honestly. The entirely restored decor is from the late 18th century, Mozart’s period, and even more relevantly, the de Hagenauers of Vienna, Maria’s family by marriage, were Mozart’s landlords for much of their Viennese residency. The wonders of Florence never cease.”

What follows in the film is the epitome of learning through entertainment as Da Ponte presents Mozart’s six-weeks-in-the-making opera, The Marriage of Figaro, to the Emperor, played by Jay Natelle (House of Gucci, Medici, Ben Hur), calling upon each character in turn to perform scenes from the opera as the librettist gives a synopsis. The relationship between Mozart (Filippo Ciabatti, director of music of the Dartmouth Symphony Orchestra and a native Florentine) and Da Ponte proves captivating as the famous composer displays a meek conductor’s role compared with the wordsmith’s flamboyant stage direction, although Felder’s Da Ponte wholly acknowledges Mozart’s musical gift, while craving at least a sliver of the recognition. Nathan Gunn (as Count Almaviva), Ekaterina Siurina (Countess Rosina), Timothy Renner (Figaro), Hila Plitmann (Susanna) and Xenia Tziouvaras (Cherubino) all shine in their roles accompanied by musicians from the Maggio Musicale Orchestra. Filmed as one extended scene on the piano nobile of the thirteenth-century palazzo by the experienced all-Italian crew led by director Stefano Decarli, the exquisite costumes from Nicolao, Venetian atelier par excellence, and luscious wigs from Florentine institution Filistrucchi add authenticity and prestige to the screen.

Felder continues: “I’ve always said: Point a camera anywhere in Florence, and whatever will be on your screen will be beautiful. The greatest treat, however, are the living, breathing artists now working in Florence. The Maggio Musicale Fiorentina orchestra, the members of which I have had the honor to play with in four Florentine-made films so far, are a world-class ensemble led by Zubin Mehta, the legendary conductor. As individuals, the musicians are generous and willing to take anything on, including being getting all dressed up in eighteenth-century garb! The wealth of artists is limitless. Almost to a one, the film crew—directors, cinematographers, lighting designers, editors, costume designers, electricians, gaffers, runners—are Florence-born. Besides being immensely gifted, they are a group of kind individuals who will work endless hours to make everything the best that it can be. There is a deep commitment to the best art possible in the Florentine tradition. The group has even welcomed the world-renowned costume designer Stefano Nicolao from Venice, who costumed our Mozart film. Stefano is known worldwide for his costumes for Hollywood hits, such as Farinelli, Casanova, Elizabeth and more. The goal is to find and illuminate the world-class talents within Florence and our environs, and create stories that we can share that show just how beautiful our city and its people are.”

Viewers learn how the poet was born in Venice as Emanuele Conegliano and had his name changed through baptism upon his father’s marriage to a 17-year-old Catholic girl. Living a colourful life, despite being a priest, in La Serenissima, he suffered exile for repercussions from an affair with a married woman, which is how he ended up in Vienna. We find out that he moved to London on the death of the emperor before bankruptcy drove him to New York. Felder details Da Ponte’s life in character with humour and charisma in this film that educates and informs about a little-known yet essential figure in musical history. Indeed, we wonder how we had never heard of this talented writer before, so many are the firsts that Felder reveals: Da Ponte was the first person to bring an Italian opera to the stage in New York, to raise funding for the metropolis’ first opera house on the corner of Leonard and Church Street, and the city’s first university Italian class.

Sumptuous from start to finish, Mozart and Figaro in Vienna is Hershey Felder’s tenth musical film released online at www.hersheyfelder.net since the pandemic began, and it might just be his best production yet. 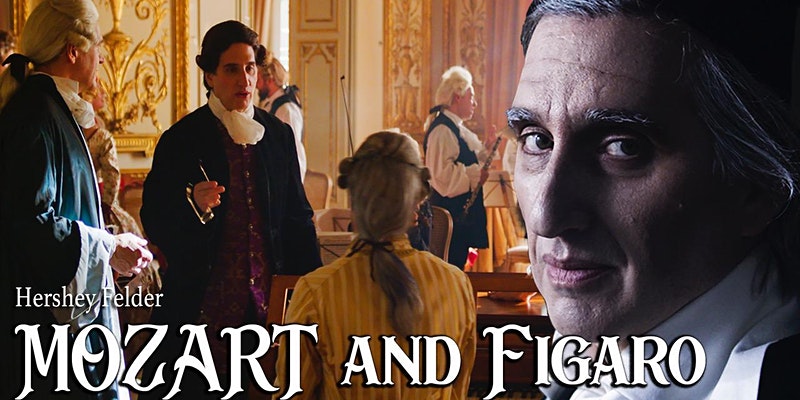 Tickets can be purchased for Mozart and Figaro in Vienna here ($50): theflr.net/mozart-tickets