Huge horned iguanas, a red tiger crouching in the middle of the Niobe Room, new versions of the Medusa, whose head teems with hybrid figures bearing bizarre beaks and sharp teeth: a legion of fantastical creatures now populates the Uffizi Galleries in Seduzione, an exhibition by Belgian artist Koen Vanmechelen. 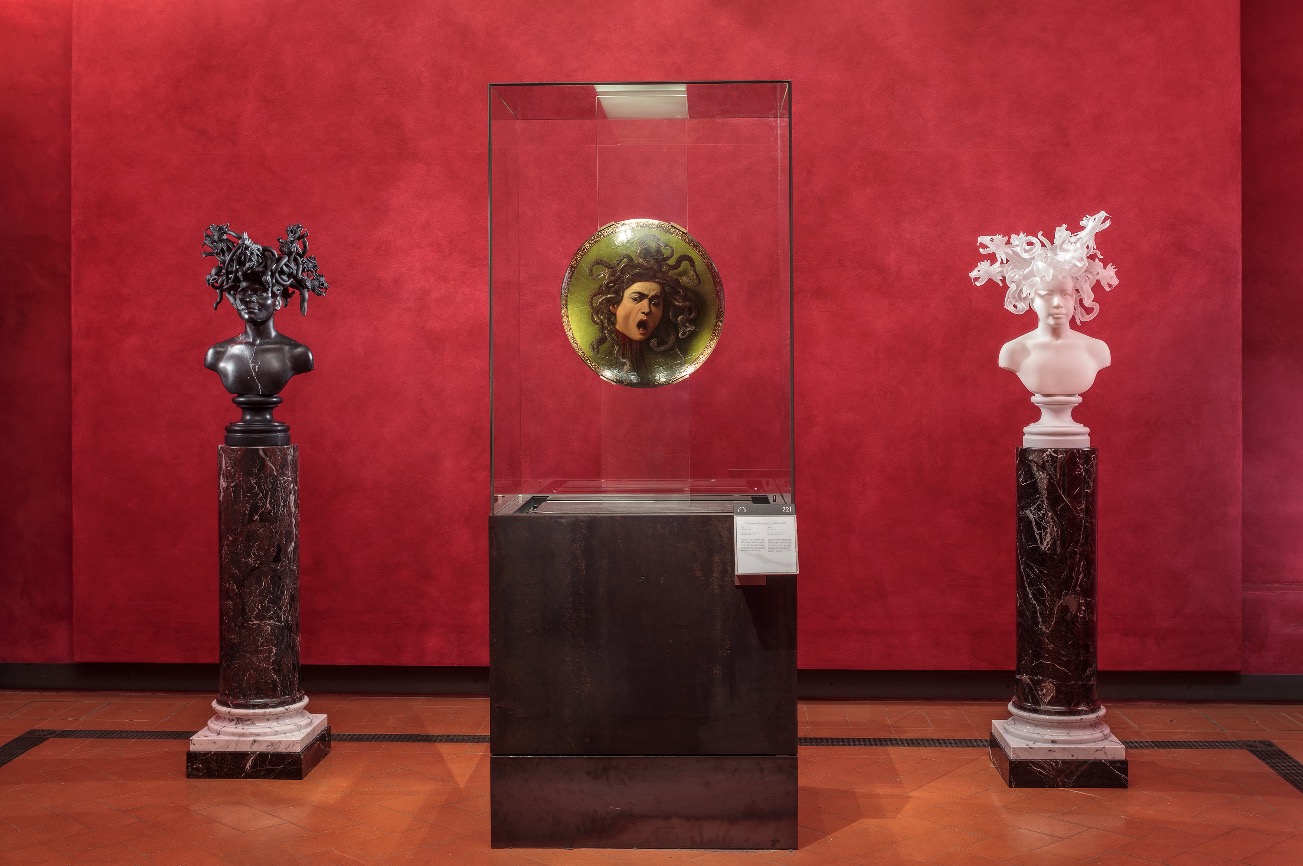 The exhibition includes 30 artworks presented among the museum’s masterpieces. Vanmechelen’s works vaunt a strong visual and conceptual impact. Born in Sint-Truiden, Belgium, the artist’s practice embraces a range of disciplines, bridging the realms of art, science and community engagement. A painter, sculptor, performer and philosopher, his interests range from anthropology to bioethics, the protection of human rights to bio-genetics and concepts relating to hybridization among animal and plant species and contamination within culture and nature as well as in formal and conceptual expression. The works in the exhibition, which were created especially for the Uffizi, focus on the primordial, archetypal and antithetical concepts that have always nourished the human imagination: life-death, human-divine, earthly-spiritual, and natural-artificial. Presented in dialogue with the Uffizi’s collection, the art creates an evocative and disorienting journey centred on the notion of seduction. 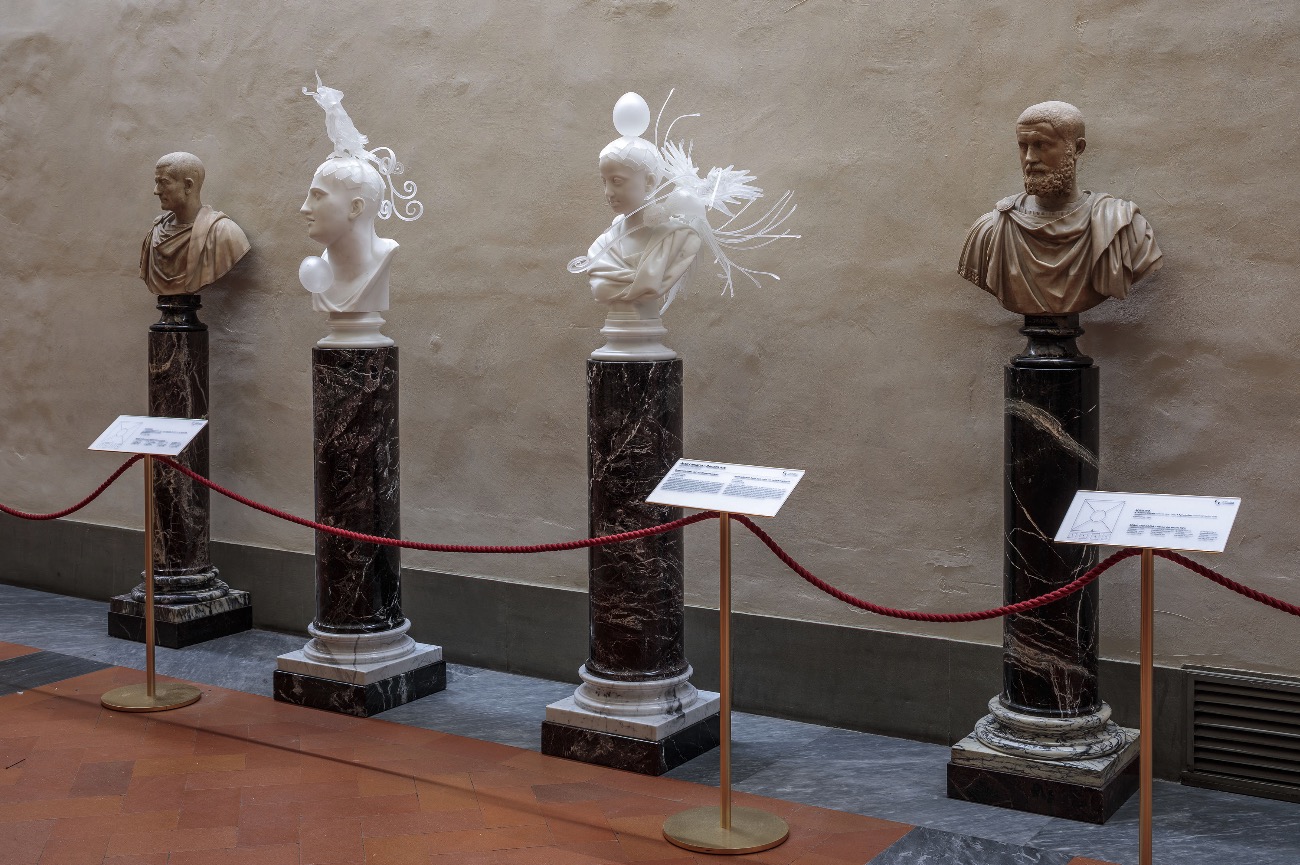 Along the Uffizi’s second floor corridors, among the classical statuary, the white Statuario marble sculptures of Vanmechelen’s Temptation series depict emperors, philosophers, warriors, heroes and divinities. Atop each figure is a cracked glass egg from which hybrid creatures spring forth, representing the freeing of the mind and its imagination. Another intriguing juxtaposition includes Bambino con Gallo, a plaster cast by the nineteenth-century Florentine artist Adriano Cecioni (normally on display at the Galleria d’Arte Moderna in Palazzo Pitti, but moved to the Uffizi for this occasion), with Vanmechelen’s Cosmopolitan Fossil. Inspired by Cecioni, Vanmechelen transforms the innocent bird featured in the historic work into an enormous iguana characterized by disturbing mutations, barely restrained by the child who holds it in his hands. Cosmopolitan Fossil references the futile effort by humanity to control the unstoppable forces of nature and is intended to encourage a more loving and healing embrace of the wider natural ecosystem. It’s a particularly poignant piece in the context of our ongoing pandemic. 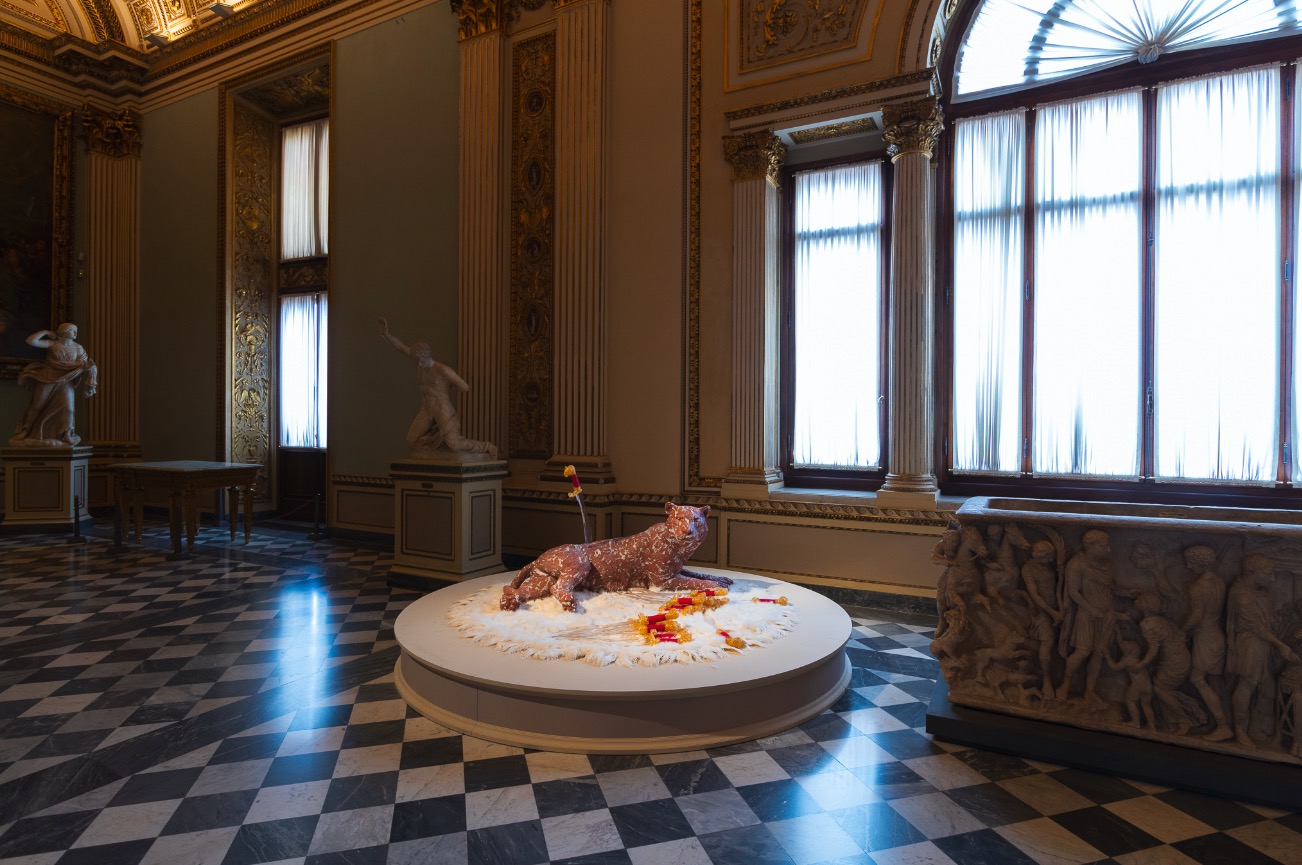 The installation Domestic Violence also plays with contrasts, both material and psychological: a life-size tiger in red marble lies on a carpet of chicken feathers in the centre of the famous room containing the Hellenistic sculpture group of the Niobids. A sharp saber pierces the tiger’s back as a tragic reference to the desperate gestures of the figures in the ancient statues. The feline is striking for its meekness and serenity, which is at odds with the dramatic atmosphere of its surroundings. 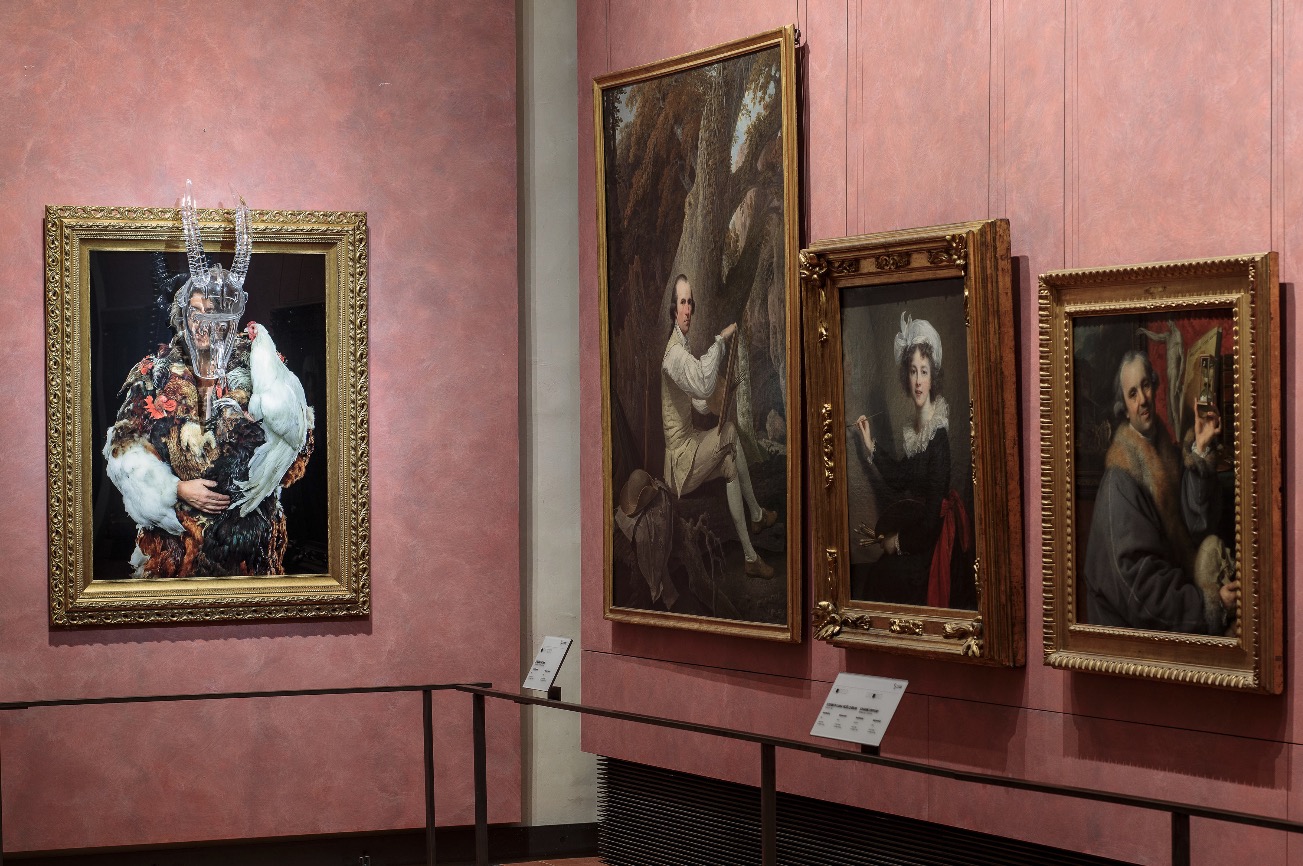 An image of the artist himself also appears in the exhibition: the self-portrait Ubuntu (meaning “I am because we are” in the Bantu language) shows him in a coat of chicken feathers, observing the visitor through a glass mask. The title is a reminder that each of us is tied to a community of other people and nature. On the conclusion of the exhibition, the work will be donated by the artist to the museum. Seduzione also includes a pair of hybrid Medusa made of marble and glass, positioned in the main Caravaggio room: their heads, bristling with snakes and the skulls of monstrous chickens, flank and enhance the horror of the snake hair that frames the distorted face of Michelangelo Merisi’s masterpiece. 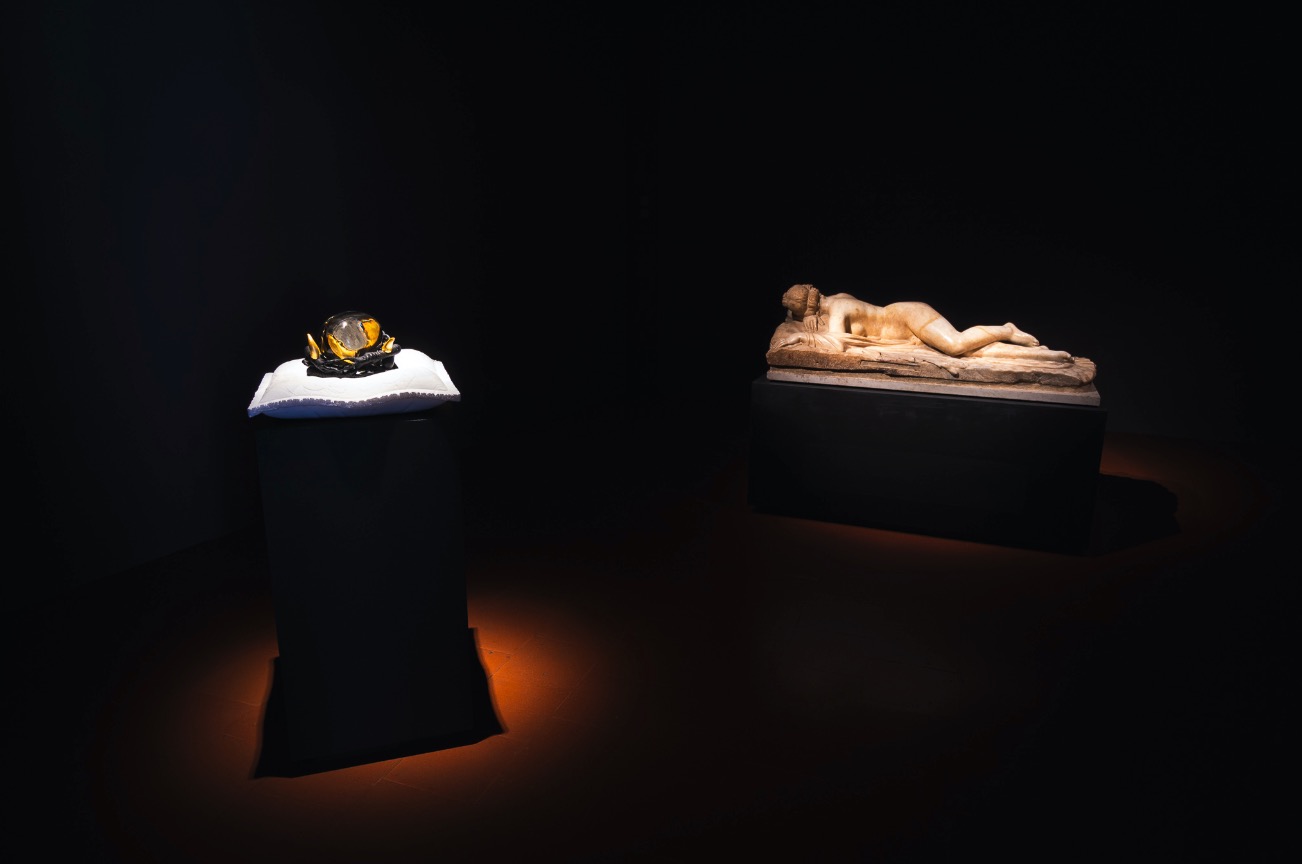 “Vanmechelen’s works seem to fit naturally into the historical collection, creating hybrids between the ancient model and contemporary expression, in ways that are similar to the biological hybridization that the artist has been personally practicing for decades in the field of nature, among various species of poultry,” commented Eike Schmidt, director of the Uffizi Galleries.

“In this moment, in the Anthropocene, we need a new global renaissance,” said Koen Vanmechelen. “We need a cosmopolitan renaissance. This new narrative must be based on an understanding of the interconnectedness of all living beings. The parallel with the Italian Renaissance is clear. Art, being designed for the future, is the way to foster and project new narratives in the world. Art has always been the connective tissue of human existence. It clarifies, opens perspectives and connects us through diversity.”

The installation will continue until March 20.