An air of beauty: AquaFlor

On the tip of borgo Santa Croce, a quiet street flanked by 16th-century buildings, several small openings are carved out of the meter-thick walls of the Palazzo Corsini-Antinori. Now owned by the Roselli-Cecconi family, the palazzo has a grand bearing where one is plunged into the Renaissance. A wooden carving with an aged shop name lies above one doorway. The fading is natural and warranted, a suggestion that, beyond this door, you will enter into another time, a time of memory, a past time of a somewhat forgotten world. You will be entering a mystical world of perfumery. Welcome to AquaFlor. 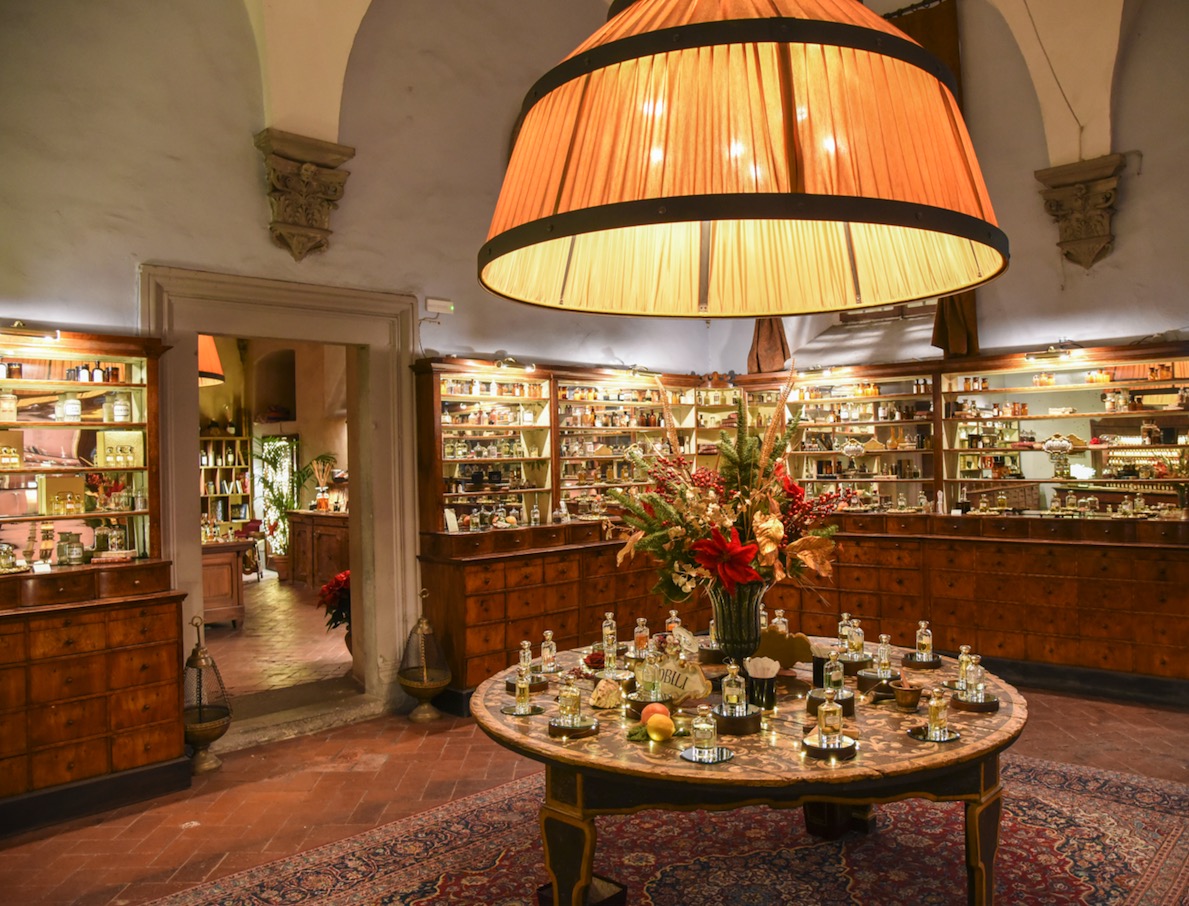 As you open the heavy glass door, you will be forgiven for forgetting to breathe, for you are immediately transported to a world of color, imagery, light, reflection and mystical scents, but above all, the sensation of floating in a dream. The ancient rooms are regal but personal, tinged in a luscious caramel-amber warmly accented with rich blues and burgundies, creams and grisailles. Suddenly you remember childhood moments by way of some whimsical wizardry.

Greeted warmly by elegant multilingual women who ask if they may assist with whatever scent your heart might desire, no sooner is the manager of AquaFlor there to offer a greeting. A kind and gentle man, Fiorenzo Arena is at once humble and proud of this wondrous place of which he is in charge. He tells the story of how, when he was a little boy, his mother was fascinated by beauty, wrapping coins in linen cloth lightly scented with lavender that she would give to her young son as a gift. Even after all these years, that same scent conjures his mother in his mind. Next to Fiorenzo is his elegant younger nephew Donato, who also directs aspects of the family business. Together, they exude joyous energy as they share the secrets of this magical place and speak of the family patriarch, Fiorenzo’s older brother, Mauro, who brought this dream to life. 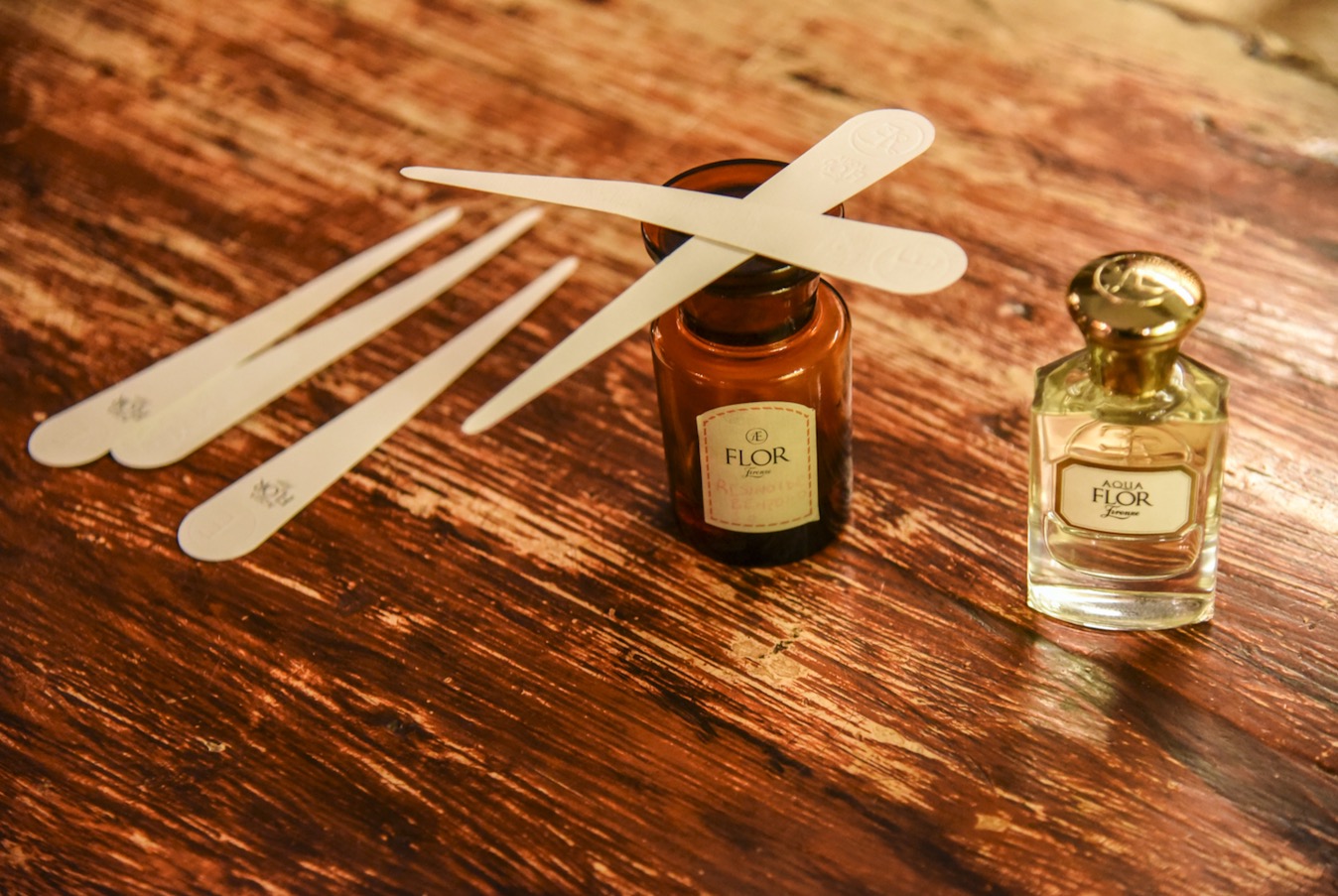 Mauro Arena, a philosopher by nature and by first profession, was born in the south of Italy and now travels between his home and businesses in Puglia and his world in Florence. Speaking with Mauro is like engaging with your very best childhood friend who recalls the happiest happenings with such enthusiasm that you can’t help but believe that you were there right alongside him as he devoured life’s beauties. So infectious is Mauro’s storytelling that, mid-thought, he is likely to start laughing, unable to form words; that’s how much the memory amuses him. You cannot help but laugh with him, even though you have no idea where the story is going.

The story that finally emerges is about coming to Florence as a young student determined to create beauty around him. Mauro was determined that this beauty would derive from nature. Mauro took various jobs to support his studies. One such job was as a guide where he brought tourists to unusual Florentine locales. Another was at a genealogical museum run by a man who called himself “Count Coccia,” at which point Mauro breaks off laughing. The museum was on borgo Santa Croce in what appeared to be a run-down palazzo. The location and the count were imprinted on Mauro. Then Mauro’s partner became pregnant and he was prepared to do anything to ensure security for the newborn. Devoting as much effort as possible to showing tourists around the hidden secrets of Florence, one day, Mauro brought a group to a man by the name of Gino, who sold gold in his shop. “Gino was an unpleasant man who never put the lights on in his shop,” Mauro says, and then again begins to laugh uncontrollably, and of course, the listener has an immediate image of miserable Gino in his gold shop contemptuous of anyone who might enter to buy. After several visits to the dark dingy locale, Mauro finally started in on Gino…“Why don’t you let me help you with lighting this place. You will do double the business in no time!” Gino retorts: “Double the business? Not possible. Leave me alone.” Then, after a moment, in very typical Florentine fashion… “Double the business? Really?” 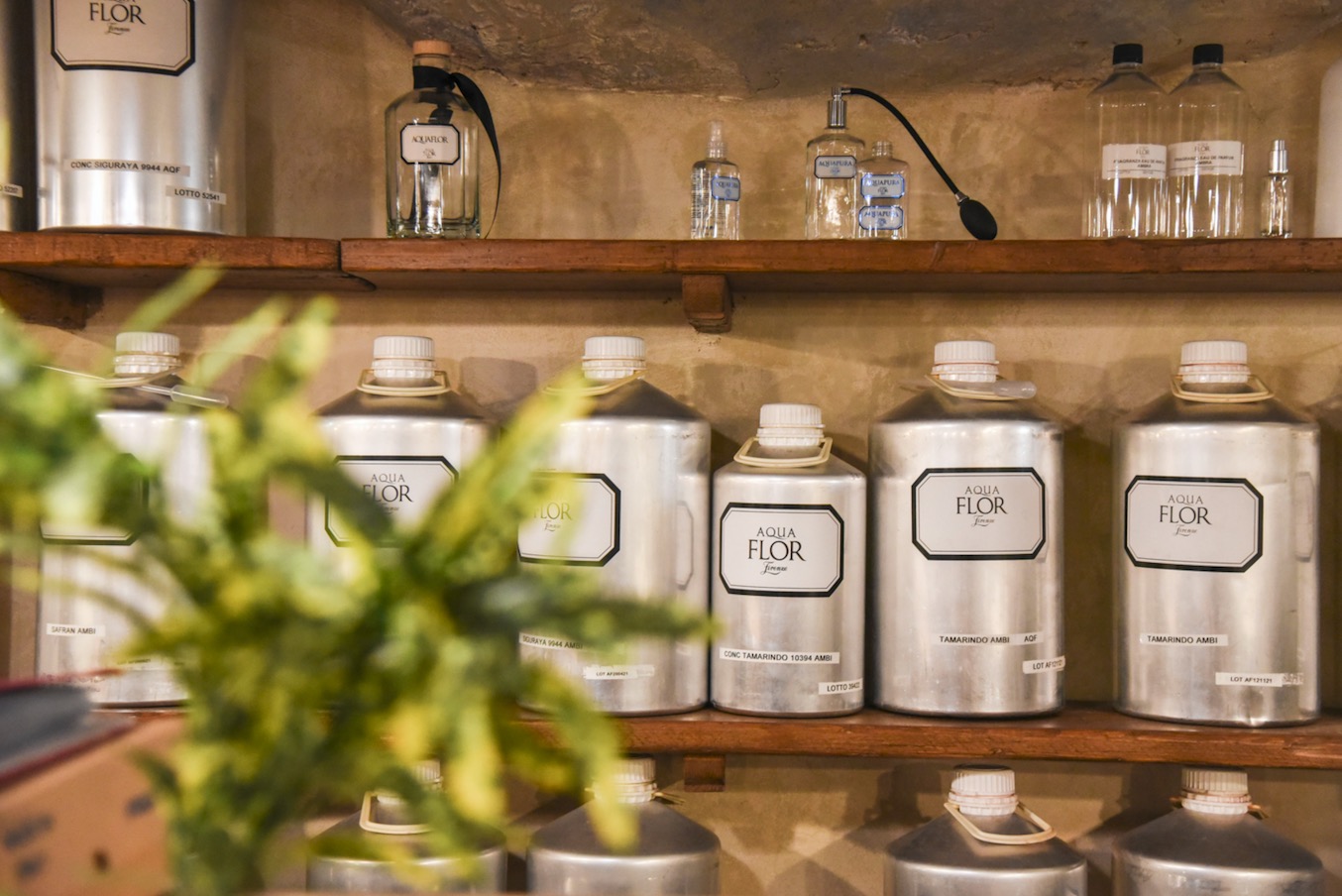 And so, Mauro made a deal that he would redesign the gold shop for a tiny fixed fee per month and take two per cent of new sales. Such a success was this redesign that Mauro became financially secure within a year. He was able to begin buying businesses and locations, using his ethic to make them beautiful, swiftly becoming the owner of many elegant storefronts in and around Santa Croce. When he sells a business, it’s never because it is foundering, he says, or because it lacks the required beauty. When he sells, it is because he has brought the environment and the business to the level where he believes he can set it free.

Back in the south where he was born, before the time when olive trees had become tragically infected with xylella, Mauro realized that there were so many olives that something needed to be done other than oil. With his mother’s influence never far from his being, he imagined creating soap out of olive oil. He was one of the first to do so. 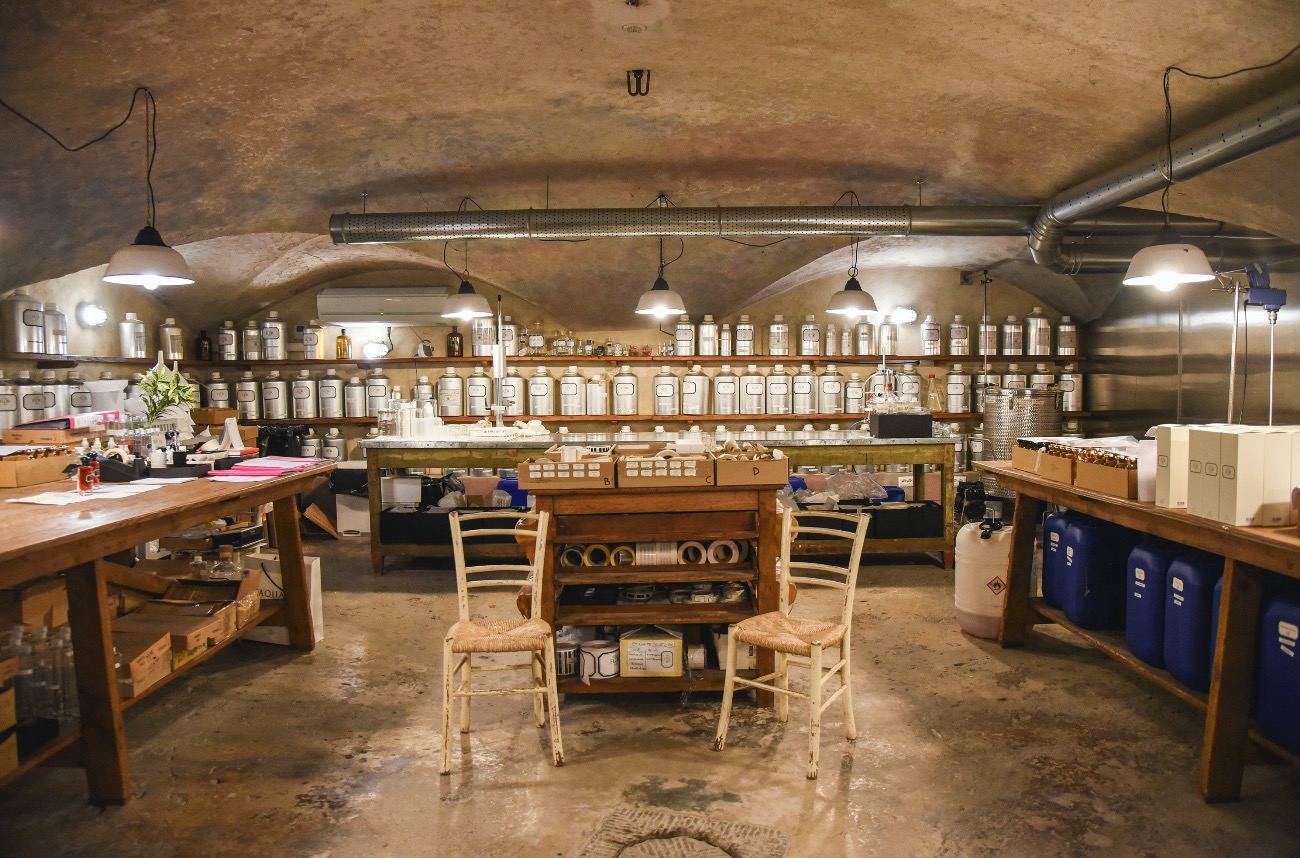 But then, he came across an article about the original perfume “Jicky” created by Aimé Guerlain that launched in Paris in 1889. The oldest continuously produced perfume in the world, “Jicky” was the first to use synthetic molecules and to consist of a cornucopia of scents. Mauro wondered about creating perfumes from only natural scents. He began to study, learned about master perfumer “Coty” (actually a Corsican by the name of Spoturno), who was credited for inventing the modern perfume industry by creating ways for perfumes to be available at fair prices for a broader market as well as realizing the importance of the bottle design, having recognized that the product must also appeal to the eye. “What if,” Mauro thought, “we returned to the era, aura and beauty of the natural parfumerie, where one could enter a world of beauty and truly feel transported?”

And so came the idea of the parfumerie AquaFlor. Mauro remembered that old palazzo with dilapidated rooms near his other shops by Santa Croce. He went to see the owner. As is Florentine tradition, whomever he was able to see at first said that the owner was never around, they had no interest, there was nothing available and to please no longer bother. Mauro left. Ten minutes later, he received a call from a property agent: “Well, if you write a few paragraphs about what you are interested in doing, perhaps the owner might be interested.” Of course to further add Florentine color, the building agent happened to be someone Mauro knew and intimated that she had been “fond” of him in earlier years. Mauro wrote out his plan for an elegant natural parfumerie and a room in the palazzo was granted. 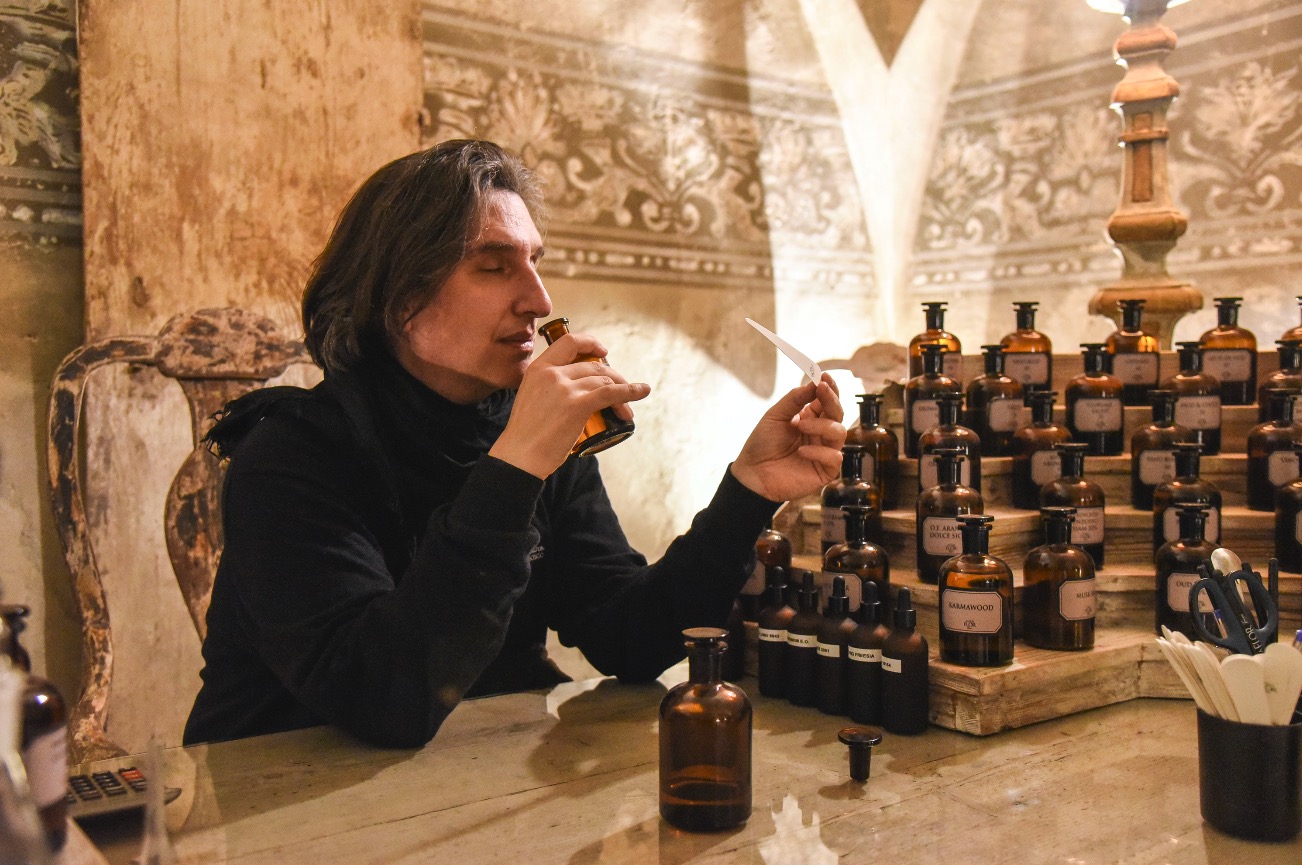 Author of this article, Hershey Felder, at AquaFlor. ph. @marcobadiani

Within a few years, one room led to another and then another, and then the cellar as well, which is now home to the perfume-making lab and workshops for couples and in groups, so that one might create their own scent, which is kept on record and can be ordered from anywhere in the world. There is a home design floral and antique shop. There are perfumes, and soaps, and bath salts, all set against breath-taking beauty, so eye-popping and heart-stopping that it must be seen and scented to be experienced. And then there is the expansive 17th-century display cabinet made of a luscious caramel looking wood, one can almost taste it. Even before the story begins, Mauro starts laughing, and again you can’t help but laugh along, knowing you will eventually be laughing at something so effervescently descriptive that you can hardly wait to find out what it is.

Almost 20 years ago, Mauro walked by a storefront in the San Niccolò part of Florence. Wooden shutters covered the door and they were always closed. One day, Mauro saw the lights were on and he was able to see through the slats. He could make out a man, reading, not certain what the shop was. Mauro was eventually able to catch his attention and the man let him in. Seeing the incredible display case, Mauro immediately made an offer. In perfect Florentine fashion, the man said, “Absolutely not. I have offers at much higher prices than yours, and I am not going to sell, and that’s that.” Over the next years, Mauro returned again and again, and the man finally accepted Mauro’s offer, and they agreed that Mauro would pay it off in monthly installments. However, there was a caveat to the sale, which was that the seller needed to keep the cabinet in place for several years, because even though Mauro loved it and knew he had to have it, he had no place to put it. But maybe one day… 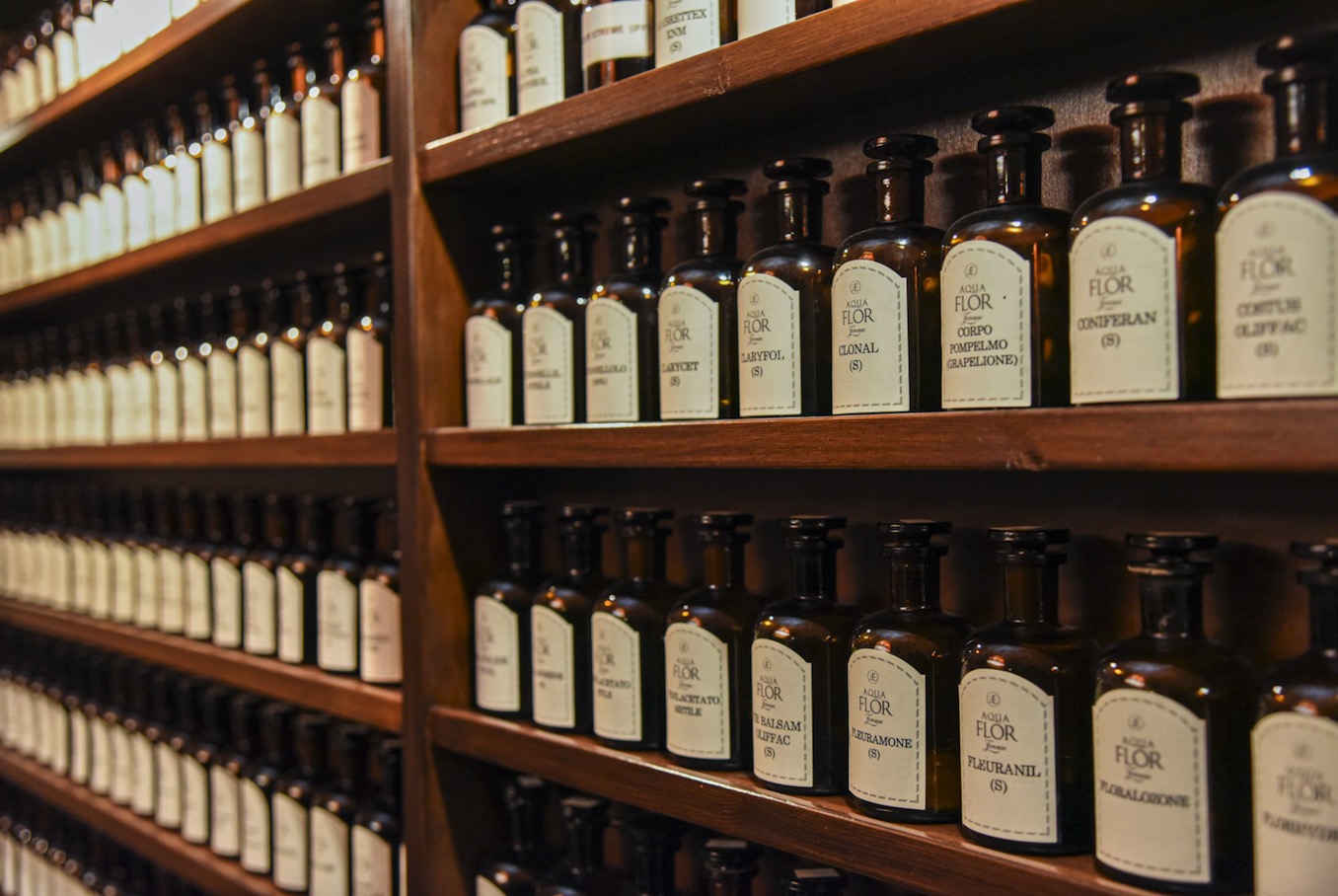 “One day” finally did come, and that was when the palazzo at borgo Santa Croce 6 gave Mauro the first room to bring his vision of a natural parfumerie to life. Once the room was restored to its original qualities, the display case was moved where it proudly sits today, beguiling anyone who sets their eyes upon it. Thinking about all this, Mauro Arena says, “I am a philosopher. I spend my days reading, learning and thinking. And one thing I am certain of. Life cannot be lived without beauty. Creating beauty is not about luck, it is, as has been said, about talent meeting opportunity.”

And if there is anyone who embodies this adage perfectly, it is Mauro Arena, the philosopher, dreamer and doer, who has created one of the most beautiful settings in all of Florence: the parfumerie AquaFlor.