The Bargello National Museum presented its newly refurbished Medieval Sculpture Hall on May 10, with renewed lighting and the decorative frieze restored. From the early 2000s, several of the sculptures on show had been removed from display, now once again viewable to the public.

The works range from the late 13th to late 14th centuries, with the updated display curated by Maria Cristina Valenti, former head of the technical office of the Bargello Museums and Benedetta Chiesi, art historian official of the Superintendency of Archaeology, Fine Arts and Landscape for Como, Lecco, Monza Brianza, Pavia , Sondrio and Varese, and carried out by Lorenzo Galli’s Galli Mostre studio.

The exhibition itinerary has been redesigned with improved works and additions to the collection including the beautiful holy water stoup of the Church of San Piero a Quaracchi that can once more be viewed. Other works include acolytes by Arnolfo di Cambio, a caryatid by Tino di Camaino, tiles by Giovanni di Balduccio from the church of Orsanmichele, and sculptures by Piero di Giovanni Tedesco. A clearer display assists engagement with the coherent selection of medieval works. Oher refurbishments carried out include windows screened with motorized curtains, a renewed lighting system, and the restoration of the decorative frieze. All the pieces were placed on uniform bases, aligned with those already in use in the Sala degli Avori, which also recently underwent renovations, as did the Chapel.

The works that had been in storage and that are now on show have recently received attention by scholars and specialists: between 2016 and 2019, the PRIN project – financed by MUIR – undertaken by four Italian Universities (in Naples, Florence, Siena and Trento) saw twenty research fellows cataloguing some of the Bargello’s collections. The results will be released in scientific publications, and through an updated online catalogue.

This room once housed the famous David by Donatello, before it was moved to the newly named Salone di Donatello in 1886, and is currently a highlight of the Donatello, The Renaissance exhibition on show at the Bargello National Museum and Palazzo Strozzi. 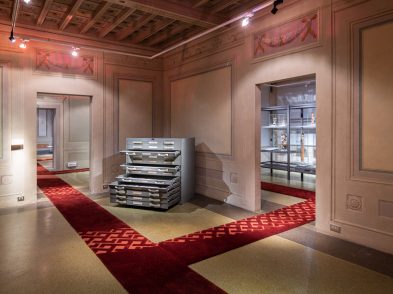 Palazzo Pitti: Sammy Baloji’s installations tell the history of the Kingdom of Congo