The Suffolk-born jazz performer has been touring with his new trio, with their final show taking place at The British Institute at 7.30pm on Thursday May 26.

Suffolk-born jazz performer Phelan Burgoyne moved to Florence in 2021 with his wife Teresa. Focusing mainly on jazz percussion and composition, he also dabbles in other interesting things like photography and the Afghan lute. Phelan has been touring with his new trio, with their final show taking place at The British Institute (lungarno Guicciardini 9) at 7.30pm on Thursday, May 26. The Florentine spoke to him about his music influences and how he ended up in the city.

You just got back from Germany last night. How has the tour been going?

It’s going great. It’s with this new trio. I moved to Florence last year and met the bass player Michelangelo Scandroglio through one of my best friends from London who’d played with him before. Then I met the pianist Alessandro Lanzoni through Michelangelo. They’re both Tuscan. Michelangelo is very proud to be from Grosseto and Alessandro is from Sesto Fiorentino. We meet at Alessandro’s house in Santo Spirito where he has a grand piano and a drum set. At the beginning it was quite casual, but then I thought Well, I’m here now – I should probably solidify a project. So, I started to compose music specifically for those two, with their sounds and approach in mind. We started to properly go for it around March, and this tour is our first set of gigs.

What’s been a highlight of your tour so far?

The first gig we played was in Budapest in a new concert hall designed by the Japanese architect, Sou Fujimoto. It was just mesmerizing. The place looks like a giant mushroom with trees growing up into holes in the roof. It’s amazing. However, I’m really looking forward to the last date of the tour this Thursday (May 26), at The British Institute. I met the director Simon Gammell as I was passing by and popped in to say hello. I started going to their classical recitals, and a friend of mine was playing piano, so I propositioned Simon about playing some jazz there. I think Thursday will be one of the first jazz gigs they’ve had, and it’s the first time Teresa’s family will see me perform so that will definitely be a personal highlight.

I went to Purcell in Watford from the age of 15, a music boarding school just outside of London, and then studied my bachelor’s in Jazz at the Royal Academy of Music. I was able to do an Erasmus exchange in Switzerland whilst at university, which opened my eyes to European music collaborations. It’s a fairly quick trip on the train from Basel to Milan so I was in Italy quite a lot. I feel like in comparison, the music scene in the UK is quite isolated, given obviously that we’re an island, but from Switzerland I was able to easily go to France, Austria, Germany, Italy and further afield and I met musicians from all over.

How would you describe the jazz scene in Italy? Who is your Italian inspiration?

I would say that Italy is a self-contained organism in terms of jazz music. I think there’s a huge history here of some of the best jazz festivals in the world. Umbria, Perugia, Sicily and Sardinia have some great jazz festivals, as well as some of the best musicians. Enrico Rava is a big hero of mine, and there’s a drummer called Paul Motian that I really admire. He was American-Armenian, but played a lot in Italy and with Italian musicians. Central Italy is definitely where it’s at. There’s also a big jazz school in Siena with a very vibrant scene.

How did you end up moving to Florence?

I travelled a lot around Europe and lived in Berlin for a little bit. I met my wife Teresa and we decided to find somewhere to settle. We got married in Palazzo Vecchio, but we met in London. She was working at the V&A but decided after 7 years that London had lost its charm, and I felt the same. So, we decided to move to Florence, where she’s from.

Where’s your favourite place to hang out in Florence?

In my garden, in my hammock! The best wedding present ever, from my Swiss friend who’s a fantastic double bass player. When you’re relaxed, everything else is good. I also love Sant’Ambrogio. I feel like it’s one of the places where Florentine people still really live there, you don’t see so many tourists and there are shops where you can buy sink handles and other random stuff. And good coffee – I’m coffee-obsessed. My favourite coffee place is Coffee Mantra in borgo la Croce.

You made an album titled Frescoes with English pianist Kit Downes and Brescian Emanuele Maniscalco on the Wurlitzer and OB-6. What inspired the title?

My wife is an art historian and studied 14th-century Sienese art, so we go to Siena a lot to the museums there and it really inspired my music, actually. I wrote Frescoes based on those experiences of Sienese paintings. It’s dedicated to an American-Libyan writer called Hisham Matar, who wrote an interesting book about Siena. Between reading his book, meeting Teresa and visiting beautiful Siena, this music sort of emerged somehow.

Book your tickets to see Phelan Burgoyne’s New Florence Trio at The British Institute on Thursday May 26 at 7.30pm. Price: 20 euros. You can also email bif@britishinstitute.it or purchase at the event. 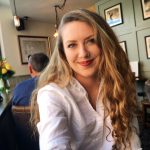 Originally from the North East of England, Holly first moved to Florence on her study abroad year at university in 2018. Between Brexit and the pandemic, she decided to swap her native Geordie for "la lingua italiana" and relocated here permanently in 2020.