With all the best will in the world, there are occasions when people’s generosity doesn’t quite meet the mark, in spite of best intentions. Speaking to the Women’s International Network on April 13, Nancy Bailey opened eyes to the realities of humanitarian aid, using her experience as a volunteer during the Bosnian war and logistics director for humanitarian efforts in Tuscany to detail the slipperiness of donations and the necessity for transparency. The Florentine reached out to Bailey for her opinion on the current response in Florence to the war in Ukraine and other ongoing wars, both in terms of what we’re doing right and what could be better.

Bailey observes that “A positive response was that the local Ukrainian community were immediately contacted and involved so that there was clear information about what was needed and how to get it to people. The European Union immediately activated the temporary protection directive, giving access to social necessities without having to go through the long bureaucratic processes to obtain them that most refugees have to go through. They are allowed to move freely in the EU and they have the right to education and healthcare; that’s not being awarded to other refugees. This really creates a precedent for what we could do in the future in response to those forcibly displaced from their countries. Usually, those seeking asylum can wait up to two years in order to get a ‘yes’ or a ‘no’. If it’s yes, they can work, but what do they do in the meantime? There are community projects which they are involved in, but they can’t do any physical work because their temporary public insurance doesn’t cover accidents. The fact that this has been changed for Ukrainian refugees is the precedent that needs to be taken. The suffering of the Ukrainian people is immense. The response — compassion, solidarity and bureaucratic efficiency — should serve as a model for how the world accommodates all refugees. I think it’s important also that people realize that the problems don’t stop once a peace agreement has been reached, because then refugees return to their country, but might find they have very little or nothing.”

Another aspect that Bailey drew attention to was the fact that those who have taken in refugees find themselves confronted with the psychological needs of those who have arrived: “A refugee has a loaded past and they have no present because they don’t know what the future is going to be, or they think they might have lost everything.” Ways to ensure that these mutual needs are met would ease the process for those hoping to take in refugees; “I think an intermediary would help. There’s a huge Ukrainian community here, they could be employed as go-betweens for these families and the refugees so that they can communicate properly.”

They are allowed to move freely in the EU and they have the right to education and healthcare; that’s not being awarded to other refugees. This really creates a precedent for what we could do in the future in response to those forcibly displaced from their countries.

Social media has been a tool used by many for fundraising efforts, and again here Bailey comments on the necessity of transparency in terms of donations, and that the platforms ought to be used for the diffusion of correct statistics so as to avoid hindering efforts: “I think it would definitely help if numbers were made public, for example, the institute of statistical data in Italy recently published data on what percentage of the population in Italy is immigrant and it’s considerably lower than anything that people believe. I don’t think people know these statistics and that’s something that they should know, the fact is that we’re NOT ‘being invaded’ and in fact EU policy is impeding people from going to the countries where they want to end up.” 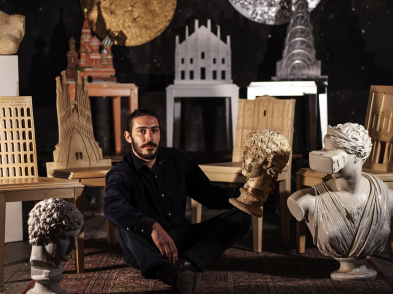