Having completed restoration, the Salviati Chapel is being opened to the public for the first time in decades.

Restoration has now been completed on the Salviati Chapel in the 15th-century Palazzo Portinari Salviati, which was once the childhood home of Dante’s muse, Beatrice Portinari.

Having undergone a six-year restoration before opening as a luxury hotel and restaurant, the palazzo is now opening the chapel to the public after concluding a restoration campaign, which began in 2019. The work was required due to issues with humidity and soluble salts being able to get inside the chapel as a result of the porosity of the plaster, issues that have made restorative intervention and maintenance necessary in the past.

Dedicated to Mary Magdalene, the small chapel was consecrated in August 1581 after the completion of Florentine painter Alessandro Allori’s painting between 1579 and 1580. These paintings were found to be particularly special during restoration as scientific analysis showed that the apparent frescoes are in fact oil paintings, a rarity in Florence. Another example of this style in Florence can be found in miniatures by Ludovico Buti in the Uffizi’s Maps Room. The paintings inside the chapel include depictions of prophets and sybils, cherubs holding scrolls that show holy scriptures, in addition to the four sacrifices of the Old Testament. Three stories of Mary Magdalene are also painted on the walls, done in such a way as to make them look like tapestries.

Beginning September 19, members of the public can book guided tours for small groups, with a maximum group size of 10 people. These tours will run every Monday from 10.30am-12 noon and 3.30-5pm, and will cost 15 euro per person (10 euro for residents of Florence).

Proceeds from the tours will be donated to finance restorations in the city, at the behest of the Chang family, who own the LDC Group, the Taiwanese company that has invested in Palazzo Portinari Salviati.

How to book a tour of the Salviati Chapel 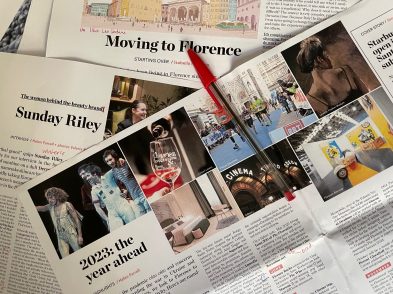