The Pietrasanta-based artist discusses the significance of the works on display in Florence and his view on contemporary art’s role in society.

Born in Rome but with Tuscan blood (his father is from Forte di Marmi and his mother from Florence), artist Emanuele Giannelli has been the subject of much discussion with his giant sculpture Mr. Arbitrium stoically standing by the San Lorenzo Basilica until October 31 (now extended to November 30) and I Sospesi (The Suspended) on show in the adjoining cloister. We met with the artist to discuss the significance of the works on display here in Florence and his view on the role of contemporary art in society.

Speaking about his Florentine familial connections, the contemporary sculptor commented on the significance of locating the work in the Renaissance city. “I was particularly pleased to have it displayed in Florence because it’s my mother’s birthplace and I have 50% Florentine DNA, but the truth is that she never really passed on a great feeling of attachment to the city, perhaps because she moved to Rome at the age of 14. I moved to Versilia in 1981 when I was 19 and it was there that I felt that I had found my people. I’ve been living in Tuscany now for 40 years, about 45 minutes from Florence, and I’ve visited this city many times. For my 60th birthday, which I celebrated recently, I gave myself the present of ten days here, staying in the Santa Croce area. I get up early when there aren’t a lot of tourists and then I stay out in the evening, enjoying it all. Although I must say that I think cities like Florence, Venice and Rome are mean in that we have so much art here that we should gift it.” 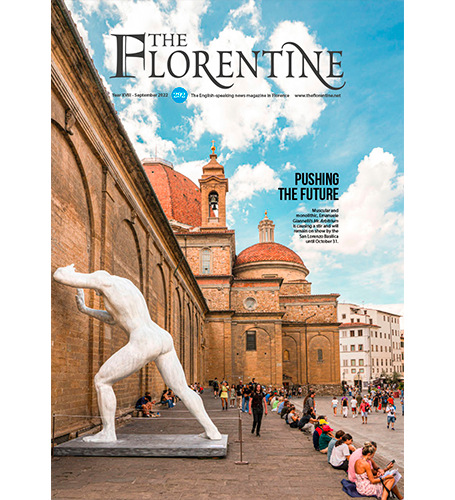 BUY THIS ISSUE – The Florentine September 2022 Choose between PDF Digital edition or Paper copy delivered to your home.

Muscular and monolithic, Emanuele Giannelli’s Mr. Arbitrium is causing a stir and will remain on show by the San Lorenzo Basilica until October 31.

The powerful figure of Mr. Arbitrium has journeyed around Italy, beginning two years ago. “First, I started to draw the figure. I placed my son pushing a wall, so that I could find the position and then once I had the sketch, I created an 83 centimetre model from concrete. When I had found the perfect proportions and balance, I scanned the sculpture and I spent another 5-6 months trying to get the volume, redoing the hands, face and feet. We put in resin, added plaster and, finally, the marble effect. The sculpture travels with one leg removed to avoid transport problems. On site, we attach the base, body and other leg. Resin is a great material because it’s light, so it travels well, and if it gets hit you can fix it easily.”

The almost pop art nature of the work through its viral sharing on social media is an aspect the artist didn’t expect. “It could easily have gone wrong because when you’re in a city with the best of the best, it would have been easy to position it in the wrong place. The white statue against the dark wall works well and the positive aspect of this sculpture is that it’s a mix between the contemporary and the classical. I come from a figurative background and I studied at the Accademia di Belle Arti in Rome and then in Carrara. I’ve always been interested in the twisting forms of the body, muscles and proportions, but to make purely figurative sculptures nowadays wouldn’t make sense. It’s much more important to create something that has a concept. Figurative sculpture has to be the means to communicating something contemporary.”

Anyone who has seen the sculpture reflects on the same question, Is it pushing the Basilica or supporting it? “Arbitrium means ‘choice’ in Latin, and so passersby observe and choose what they feel, whether it’s pushing or sustaining. The concept is that we need to have awareness of our tradition, culture and story at this moment in time, with a passion for the newness that moves forward. I’m very influenced and conditioned by science and technology, particularly artificial intelligence and neuroscience, because it tells us that through a microchip we can feel better or depression can pass, but there’s a possibility that our personality could transfer to a machine and this destabilizes and confuses me. We need to understand this historic moment if we want to accelerate towards a future. What future do we want? What influence on the future can we have? Do we sustain all that has come before? History and traditions can give guarantees, but on the other hand they can fill you with dread for the future. We are living in the middle at a time when it feels like it’s exploding. We have to reach an awareness. Mr. Arbitrium doesn’t try to answer, but asks.”

The trademark glasses on the 5.6 metre sculpture are a regular feature of Giannelli’s works. “I almost always depict male nudes. To add a contemporary symbol, I added welding goggles as a symbol of technology and our capacity to industrialize. I became very interested in gaze and how we look at others; it’s the most human part that we have. The goggles make them almost inhuman and they are often looking upwards to a potential future, exploring visionary ideas. We are already in the future that Mr.Arbitrium tries to bring forward, but the moment to decide is now. I try to use the medium of sculpture to prompt people to consider what will come next.”

“My work is often discussed in terms of unease, but that’s not how I view them. I think I’m very realistic. Humans have always had traumas and always will. The four sculptures in the cloister of San Lorenzo explore this theme, the seriousness of life, and this steel hook that keeps us up. I present these figures upside down and in precarious suspension, but they are not feeble, their muscles are in tension, indicating a desire to react to contemporaneity and daily life. We all get up in the morning and we have to fight through our day and the heavy world. They are resisting and battling the hook that holds them. I see the work as positive as it reveals our capacity to withstand“. 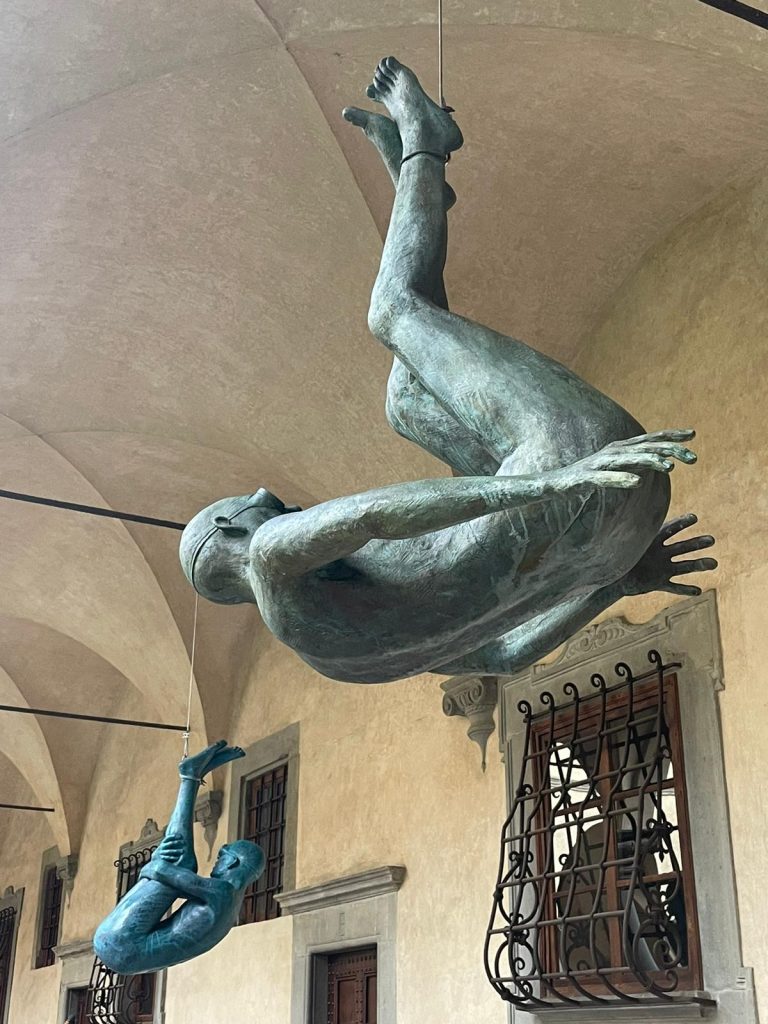 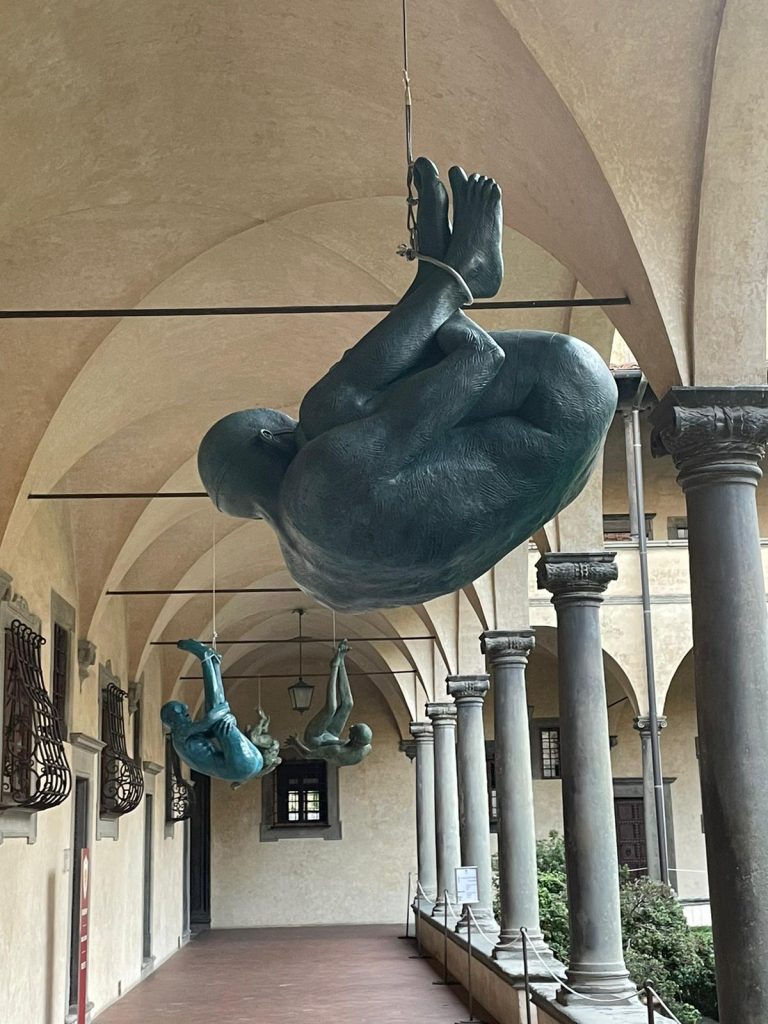 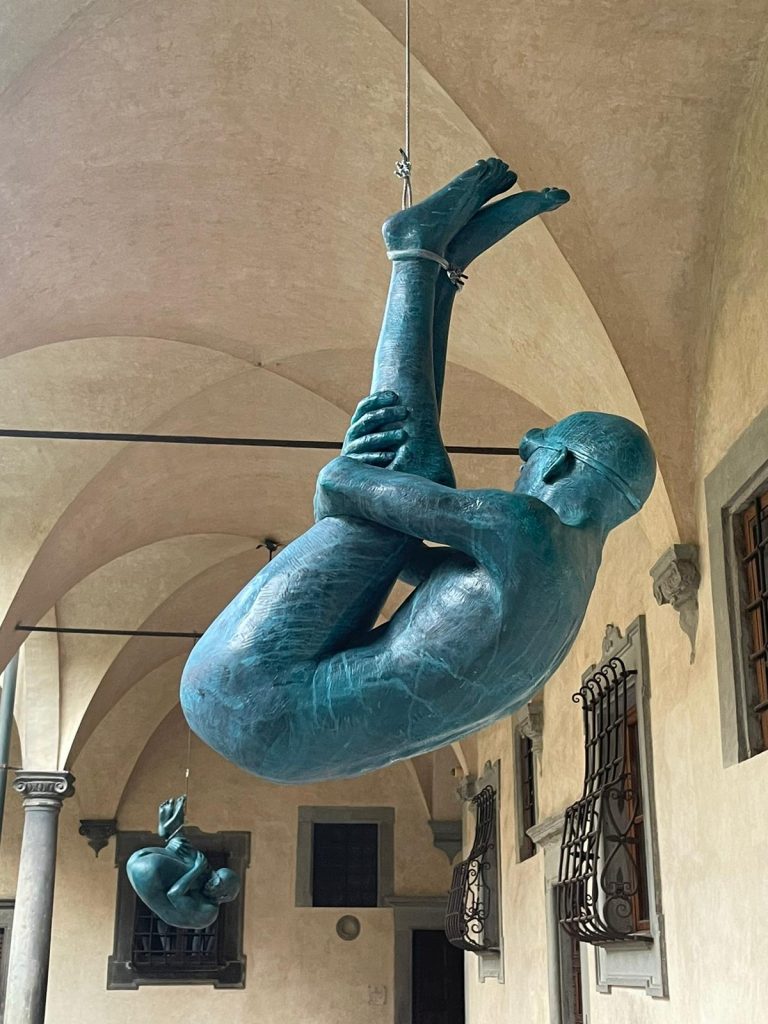 When asked about the humorous reaction of Florentines (who affixed a notice saying O’ Giannelli, let’s hope it doesn’t fart, or we’ll end up at Careggi…Wouldn’t it have been better if, instead of holding up the door at San Lorenzo, you’d taken it to Pisa to straighten the crooked tower…), Giannelli responds: “I came to Florence over a month ago and realized very quickly that there was a problem. I was asked many times ‘Are you ready for the Florentine polemics?’ I answered by saying that’s life. Life can be exhausting and we need to look for humour. It’s fundamental. Tuscans are very adept at laughing and mocking, and we are also good at exploring the other side of things when we’re not convinced. We open a discussion and we don’t take anything for granted: it’s a mental exercise.” 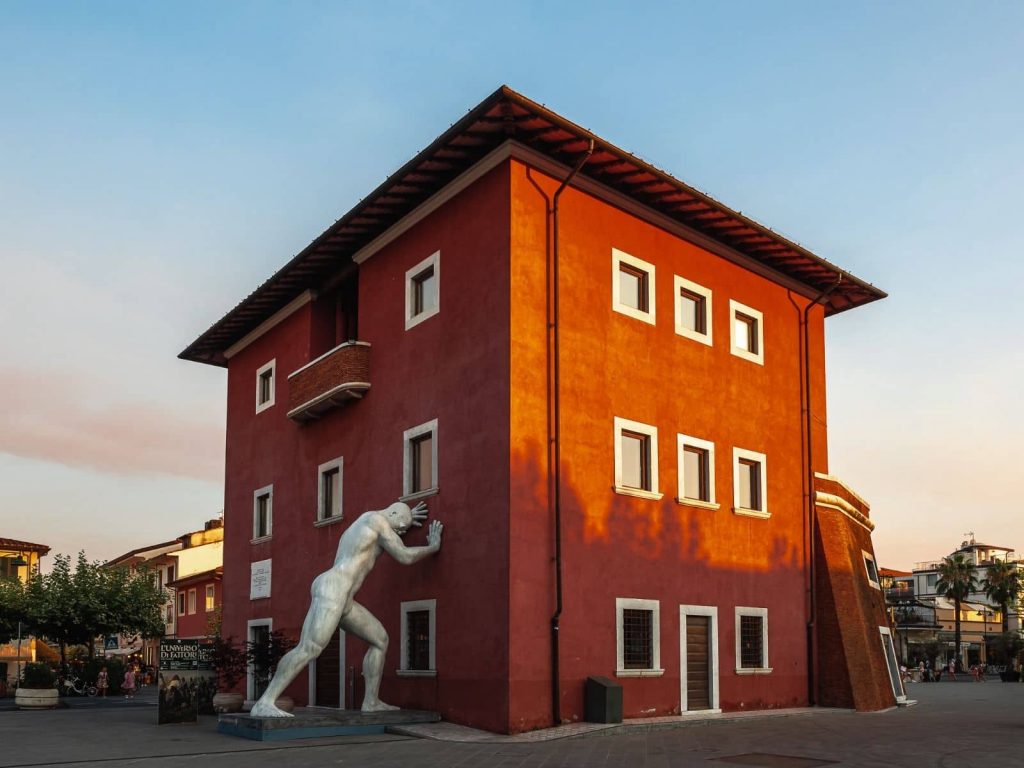 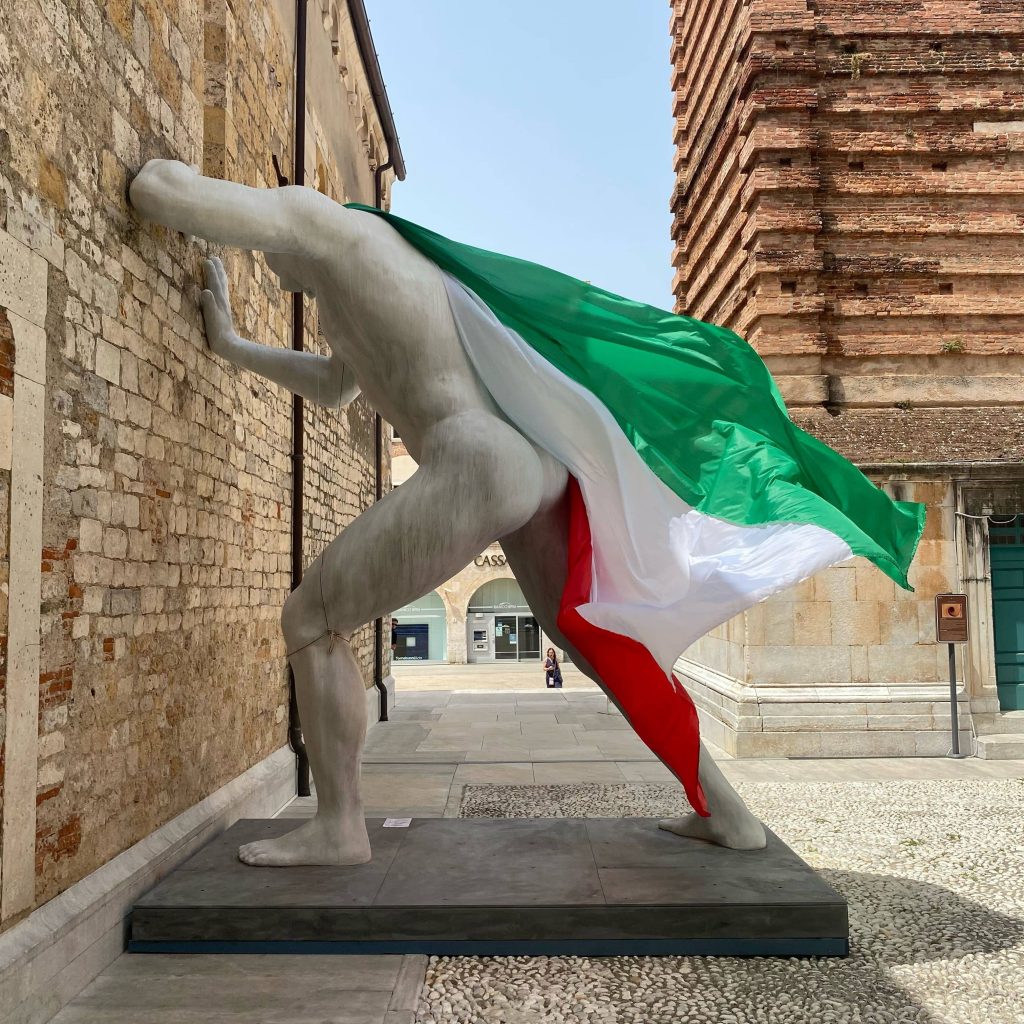 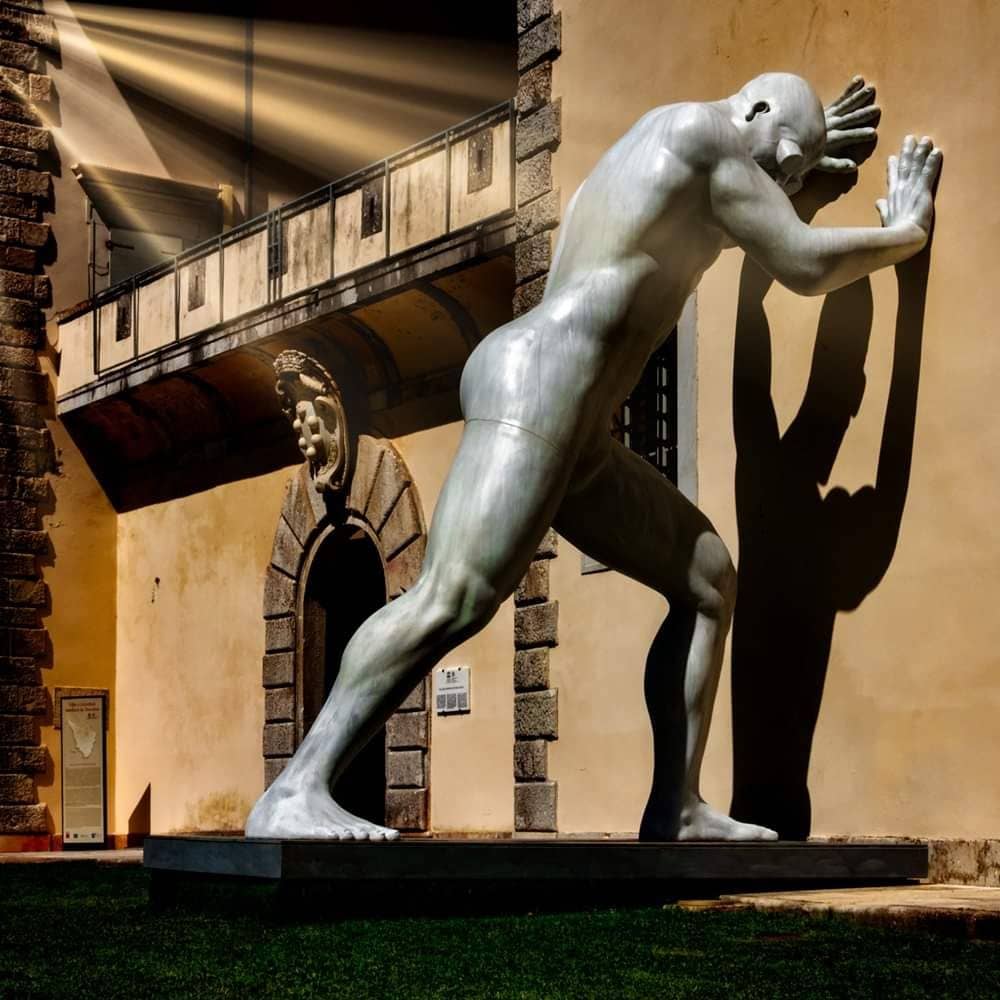 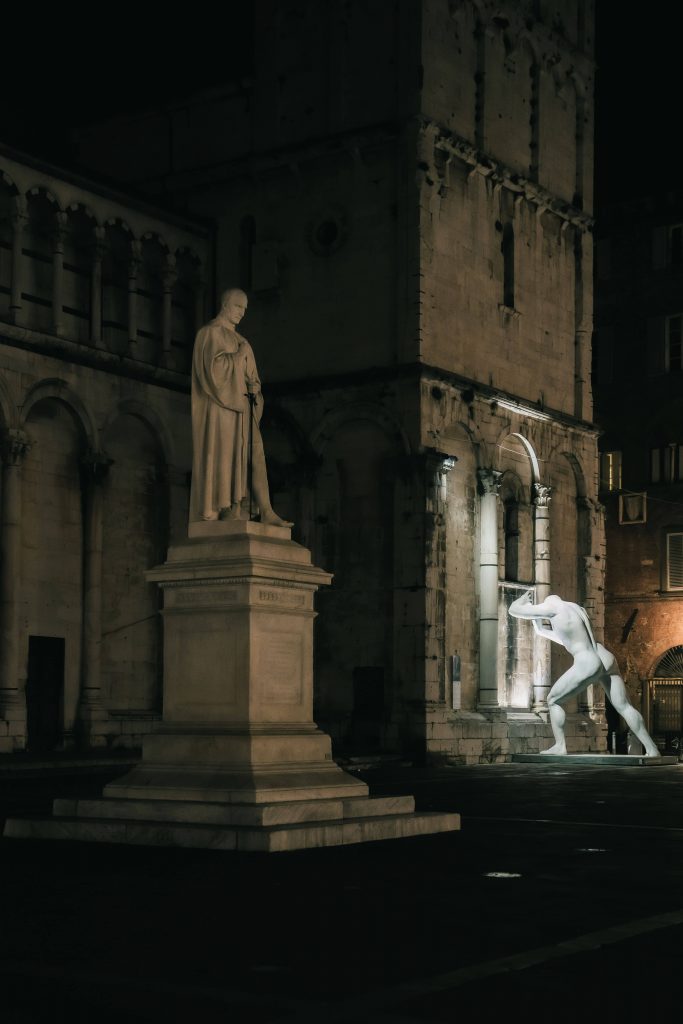 The work has been exhibited in various locations, with each site adding its own element to the display. “San Lorenzo is a popular neighbourhood that is also touristy. The interesting thing about Florentines is that they seem to have accepted the statue, possibly because there’s a classical aspect and then an additional contemporary element layered onto it. There are cities that are so beautiful that the contemporary may become a bit lost; the public has to force itself to confront the contemporary. A sculpture by Bernini or one of Lippi’s frescoes are so beautiful that they enchant you and you don’t have to ask it many questions. It’s there: you look at it, you absorb it, and you go. On the other hand, contemporary art needs you to make an effort: who made it, what’s their story, why did they do it. It’s very important not to judge by initial appearance”.

Contemporary art has seen a growing emergence of art that’s “about you”, in a kind of turning of the mirror. “Contemporary art had become something snobby. We closed ourselves off in galleries and in museums, putting inaccessible prices. People should take a step closer, and contemporary art should meet them halfway. Urban art, as I’m experiencing it, is fantastic because you’re in the middle of the street and everyone passes by and gives their opinion.” Most certainly therein lies the beauty of art, when a work prompts you to take a seat on the steps of the basilica, swivel around, and reflect on the might above you.