Louis Emory talks about his group The Reckless Few’s first album, Love Italy, and his upbringing in an Italian-American family.

Louis Emory speaks with The Florentine ahead of the release of his group The Reckless Few’s first album, Love Italy. After traveling to Italy in 2017 and 2019, the singer-songwriter from Troy, New York was inspired to release his first album, which is an ode to a place he soon hopes to call home. For Louis, Florence is a dream-like place unprecedented in its celebrations of artists, architecture, history and culture. This release with a rock and roll twist was made to show Emory’s gratitude to Italy for reigniting his creative fire. Over a coffee in the back room of Caffè degli Artigiani in piazza della Passera, Louis and his wife/creative partner, Raeanne Wright-Emory, chat about their love for Florence.

How did you get into music?

Louis Emory: I grew up in an Italian-American household. Frank Sinatra was a very big deal. We listened to a lot of Dean Martin and that era of music. My Mom was into The Beatles and The Beach Boys, and my Dad was into Motown, Stax and Muscle Shoals. As a kid, you’re just along for the ride and I guess it all just seeps in. Then you rebel: big hair, with rap coming into the States. I got swept up in some of that, but it all eventually led me back to The Beatles, The Stones, and that’s where I’m at now. I can’t get out of it for some reason. I keep searching, but it’s tough!

What did you grow up?

Louis: Troy, New York! Pre-pandemic, Troy was really starting to blossom again. A lot of restaurants were opening. We had one of the top farmers’ markets in the U.S. Troy’s a walkable city and we’d be outside on Saturday, seeing vendors and friends. It was just a good energy. Now, it’s starting to slowly come back, like everywhere.

What is it like growing up in an Italian-American family?

Louis: There were a lot of swear words sometimes! We spoke an Americanized version of a dialect, you know. We grew up with stories from over there and we grew up in the kitchen, observing at first, then helping them make the sauce and meatballs. I know it’s not an Italian thing!

Raeanne: It’s a very guarded recipe. When they finally told me, it was a big deal.

What part of Italy is your family from?

Louis: I’ve been doing some research during Covid and I’ve tracked the family down originally to the east edge of Naples. I don’t know how long they were there for, but I dated us back to the 1600s in Pisa. Now I have to talk to somebody in the state archives there, because there’s patrician honor on our family crest, which I’ve only read about in Ancient Rome.

How did you both meet?

Raeanne: We started chatting online and I discovered that he was into yoga. I was running Troy Yoga before I had a baby and I was planning a yoga trip to Italy that didn’t work out because I couldn’t get enough people. But I was promoting it, I messaged him, and that’s how it started. He ended up coming to my yoga class a week later, and that was it. So yoga and Italy brought us together.

What is it about Florence that inspires you?

Raeanne: I had been married before and in my previous life, I had traveled to Italy several times. In 2017, about a year and a half after we had been dating, we finally came here. He ended up becoming obsessed with Italy, as I knew he would. When we got home, all he wanted to do was watch travel shows and read books about the Medici and architecture, and all that!

Louis: A lot of people are using the term Renaissance in the States. Words mean something. I’ve always been into history and I’ve always been an avid reader, so it’s kind of divine that we met and that the trip happened. Once you get here, and you’re looking up at the Duomo, there’s just nothing like it in the States.

Raeanne: The first song he wrote is ‘Firenze’ and it’s about Cosimo de’ Medici.

Louis: Cosimo de’ Medici is a good model for how things should be going in the world. We just got out of this crazy pandemic. You look around Florence and what he did, and we’re all still coming here. That’s long-term vision. We appreciate all the people we’ve met in Florence and their kindness. Most people think coming to Italy is too expensive, but you can get creative with it.

Tell us how the album came about.

Raeanne: Lou did this consultation with Shelly Yakus in early 2021. You can go through his website, pay a fee and sit down with this master music engineer. They ended up hitting it off. Lou kept in touch with him over the year and sent him stuff here and there. At the end of last year, he was going to release the album. It was done. But then they had this 90-minute phone call for like an hour and a half about music and everything. At the end, Shelly said, “I want to re-listen to this album you’re about to put out. I think we can make it better.” He hears things that we can’t hear. They re-engineered the entire album over the beginning of 2022. In 1999, Shelly was nominated for induction into the Rock and Roll Hall of Fame. He’s worked with John Lennon and Tom Petty: the list goes on. 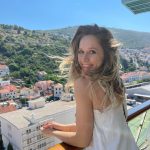 Amelia Hood is an avid traveler and creative, originally from Austin, Texas. She is currently studying her Masters in Fashion Design at Istituto Marangoni.