In February, Claudio Bertini, a man who, if you look twice, might be mistaken for Giuseppe Verdi; Massimo Gramigni, who could be seen as celebrity chef Antonino Cannavacciuolo’s older brother; and Giovanni Vernassa, appearing as if he had been lifted from the pages of Vogue Italia, invited me to see Teatro di Fiesole. It’s “Tuscany’s newest theatre”, a “jewel”, they said, hidden in the hills of the ancient city of Fiesole.

Sitting five kilometers northeast of Florence, Fiesole is thought to have been established some 3,000 years ago as a part of the Etruscan Federacy. Eight hundred years later, early records indicate that the Romans conquered Fiesole, which would account for the Teatro Romano, an outdoor tiered amphitheater, still in use today and considered one of Tuscany’s oldest theatres. For the last 600 years, with its hilly estates and charming town centre, Fiesole has been the country getaway for Florence’s upper-crust. Today, the area is a hub of higher education, home to the European University Institute Campus as well as the regional campuses of American universities Harvard, Georgetown and Saint Mary’s of Minnesota. The Medici had a glorious villa in the vicinity and Fiesole is on tourist lists as a “must visit” with its walled roads and gardens, abbeys and monasteries, wonderful dining and unparalleled views. The Estate Fiesolana, an outdoor summer music festival featuring 70 or so acts, is a beloved tradition for Tuscans and visitors alike. With Florence just down the hill in all its cosmopolitan gentility, one has to ask the reasoning behind the construction of a “new theatre” in a “modern style” in Fiesole, a town already so rich in culture and tradition.

Piero Farulli, the son of a shoemaker, fell in love with music as a boy and studied to become a virtuoso violist. After WWII, he joined the Quartetto Italiano and began his illustrious instrumental career some years later, bringing the dream of an egalitarian music school at the level of an international conservatory to fruition, called the Scuola di Musica di Fiesole. He also harbored a dream for a comprehensive cultural environment in Fiesole, not just an outdoor attraction that could only be used in the summer, and the community was encouraged that such a thing was necessary. The project was finally commissioned at the end of the 1990s and the first stone was laid in 2004. With budgeting difficulties, the plans were put on hold for many years and the stone structure stood waiting for completion for almost two decades. Enter Fiesole’s Mayor Anna Ravoni, who campaigned to have the theatre completed, with the triumvirate of Bertini, Gramigni and Vernassa, star producers of theatre and public events in Florence. In fact, Bertini and Gramigni are the purveyors of the Teatro Romano and the Estate Fiesolana. The partnership seemed to be a match made in the heavenly hills of Tuscany to bring this new theatre to life.

As I arrived at the theatre on the via Farulli, I was struck by its position, literally a delicate diamond, the angles of its glass encasement reflecting the fresh winter sun. Strangely, in a town of ancient relics, the theatre structure did not look or feel out of place. I had the sense that the creators of the modern structure took great pains to have their gem stand out, not by shocking the surroundings, but instead by using warm beige stone, glass and light to reflect and embrace the environs. In that respect, the theatre is masterfully placed. It is welcoming, warm, and it feels part of an historic but active town. It isn’t musty, but it is classic. A stunning accomplishment indeed.

On touring the theatre interior, I was asked if I would consider performing a series of shows there. Perhaps Beethoven, bringing that character, his music and life—its complications and the reflections of those that were closest to him—alive on that stage some seven months later. Staring at an empty shoe box, I asked, “Are you sure you are going to be ready?” The Triumvirate assured me that they would be. I then said, “But it took you 20 years to get here. At least ten more to finish, right?” The trio smiled that wry Italian smile that indicated, “You’re probably right, but we’re going to do our best.” They did better than their best, a hallmark of the professionals they are, having staged productions of mine at Teatro Verdi in central Florence. They work hard, keep their word, and can be counted on. It’s a rarity throughout the world, especially in the entertainment field. 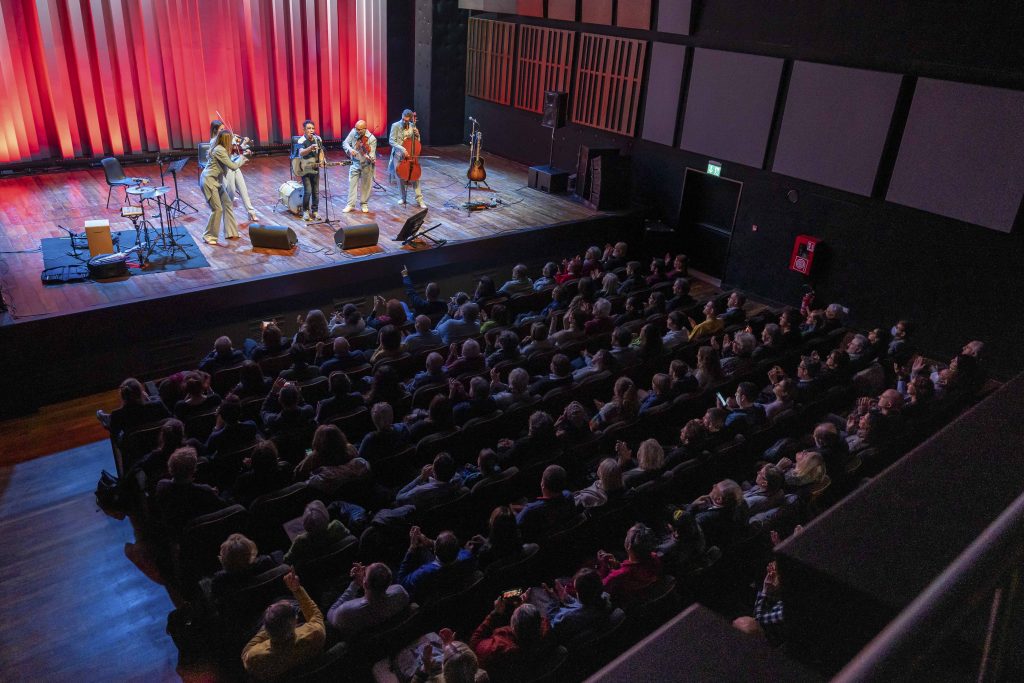 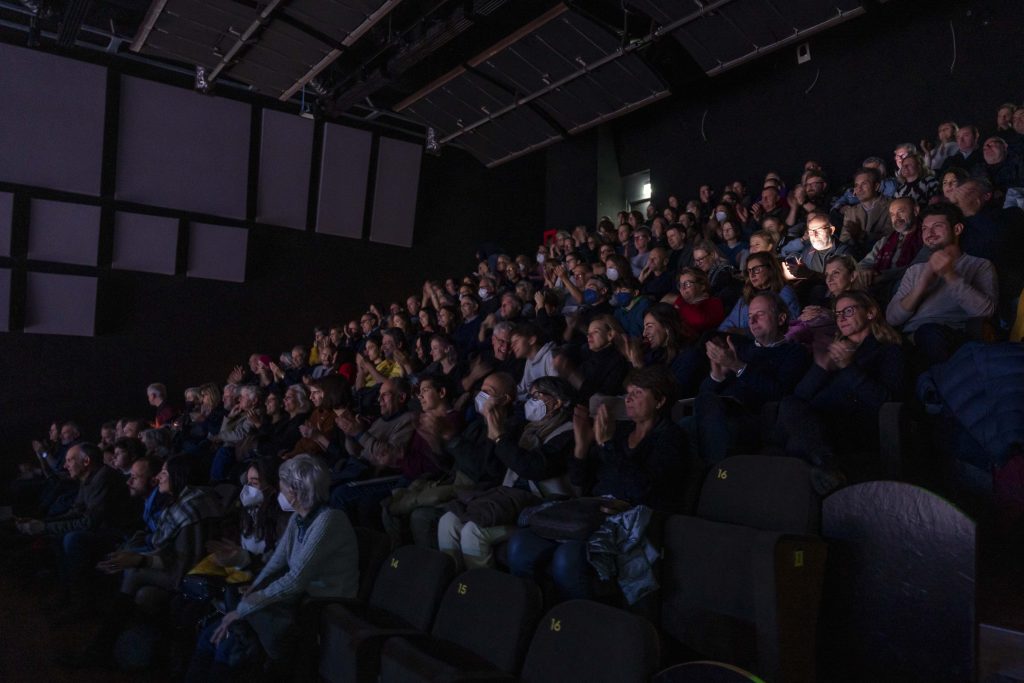 And so, months later, on November 21, the theatre was officially opened with an invited capacity audience to celebrate the musical premiere with the Galilei Orchestra made up of the advanced students of the Fiesole Music School, along with their director and master pianist, Alexander Lonquich. Lonquich is a renowned concert pianist, who is known for his structured virtuoso approach to classical repertoire. Fearless on stage and in his approach to both Mozart and Beethoven, we were treated to a rendering of Mozart’s 23rd piano concerto in A major and Beethoven’s 4th concerto in G major, along with an encore, the first movement of Mozart’s 21st piano concerto in C major. Staples of the piano repertory all, Lonquich brought a thoughtful muscular approach to the music that he elicits from his orchestral students as well. It is nice to see an old-school virtuoso both playing and conducting, as Karajan and Bernstein would do. The musical conception is then of a whole and one can hear that Lonquich strives for such continuity. To experience this in a new theatre by students and their teacher, all born of the man who had a dream to make cultural experiences in Fiesole special, made for a moving evening. To say nothing of the capacity audience enjoying a new space in their hometown, sitting comfortably with considerable space between the rows.

The “boys” have programmed interesting and unusual things in the coming months in this new cultural “jewel”. One of the presentations that might be considered unusual is my own production of Beethoven, As I Knew Him, based on Dr. Gerhard von Breuning’s account of caring for Beethoven at the request of his father, who had been the composer’s closest friend. The story goes through many twists and turns, and features some of the master’s greatest music played live: from the Moonlight Sonata to the Pathétique and the 5th Symphony arranged for piano, the Emperor Concerto, the 9th Symphony, and more. The trio asked me to play the production for a week in Italian, with one performance in English on December 9. Get your tickets here.

I am incredibly honored to perform in this inaugural season in the ancient town of Fiesole that neighbors my Florentine home. But, most importantly, anything I might do will be to celebrate the Sindaco, who considered it important to bring a new cultural institution to fruition, and to honor the professionals who saw this through. After all, we can celebrate the dead artists and what they have left behind as the magic of our city, but celebrating the live ones and their newest contributions ensures that the cultural values of one of the greatest environments in the world will continue.

A night at the theatre: Hershey Felder as Beethoven

Embrace the holiday season with an evening at the theater—and what better way than to see Hershey Felder in Beethoven As I Knew Him at the newly opened Teatro di Fiesole.

BEETHOVEN As I Knew Him

Get your tickets here. 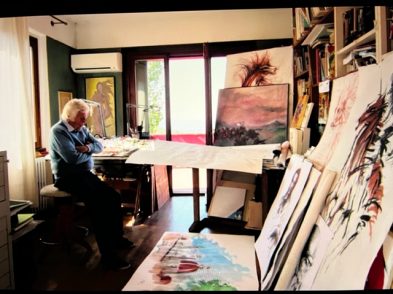