It’s that “most wonderful time of the year” when our mood is lifted by cinnamon-scented hot toddies, twinkling fairy lights and merriment every way we turn. Highlights for me include the AILO Christmas Bazaar, held on December 7 and 8 at Giacomo Roster’s 19th-century iron-and-glass Tepidarium; the carol service at St. Mark’s English Church on December 17; and, of course, a stroll around the German-inspired market in piazza Santa Croce, on until December 18. The festive season’s busy calendar also features a Christmas fair at The British Institute of Florence on December 2, a charity market at Florida State University’s via de’ Neri campus and Nataleperfile’s charity fair at Palazzo Corsini on December 2-4. For the full line-up of holiday events and more this December, see Jane Farrell’s eclectic Best Events section. 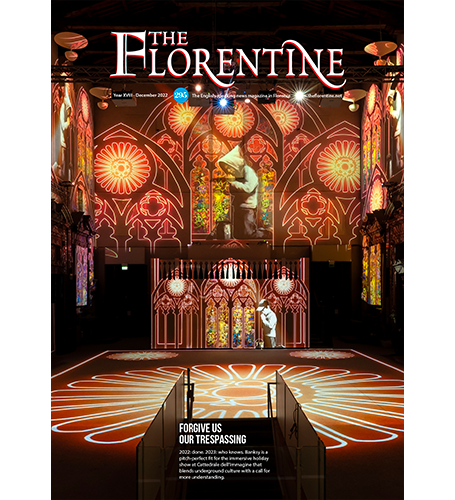 BUY THIS ISSUE – The Florentine December 2022 Choose between PDF Digital edition or Paper copy delivered to your home.

2022: done. 2023: who knows. Banksy is a pitch-perfect fit for the immersive holiday show at Cattedrale dell’Immagine that blends underground culture with a call for more understanding.

This month’s cover story could be seen as provocative, but it’s pitch perfect for the challenging times we are living in. Arguably, the big draw this winter for families in search of culturally-driven immersive entertainment is Inside Banksy: Unauthorized Exhibition, which is already wowing the masses at the former church of Santo Spirito al Ponte, now rebaptized as digital arts venue Cattedrale dell’Immagine, a short distance from the Ponte Vecchio. Officially dating back to 1116, legend has it that the place of worship actually existed in Charlemagne’s days, as claimed by a horseshoe nailed to the old door, which the emperor is said to have lost on the way to Rome for his coronation in 800. Following high-impact shows on Dalì, Magritte and Van Gogh, now the medieval chapel has been transformed by Banksy’s street art, which brims with subculture and satire as a call to action for society’s underbelly. The image on our cover is a riff on the pseudonymous British artist’s 2011 work, Forgive Us Our Trespassing, which was originally commissioned by the Museum of Contemporary Art in Los Angeles. Displaying a stained-glass window whose glass panes are covered in graffiti and a boy dressed in street clothes, kneeling, supposedly in prayer, with a paintbrush, it is as if the artist is asking for forgiveness while acknowledging the perplexities of critics who perceive his output as vandalism. In short, Banksy, whether you love his art or not, is calling for more understanding, something the world could use by the bucketload this winter and beyond.

One such example of compassion comes from La Compagnia di Babbo Natale, whose 240-plus Santa-hat-wearing members perform countless acts of goodness all year round, from the expatriation of Ukrainian children to participating in the December 7 official Christmas lights switch-on at the Palazzo Vecchio. Read more on page 4. Bergljot Leifsdottir Mensuali tells us about the American International League of Florence’s charitable endeavours on page 20 and we publish a risotto recipe from the Catholic Church’s homeless charity Caritas’ winter cookbook on page 28.

Our interview is with Ross King, the bestselling author of Brunelleschi’s Dome and several other Renaissance-centric books. The Canada-born, Oxford-based writer speaks to art historian Paola Vojnovic about his relationship with Tuscany and what we can all learn from the Renaissance for daily implementation. See pages 8+9. Indeed, this issue has a bookish theme with recommended reads from our friends Icaro Rotunda and Gianluca Romeo at the Paperback Exchange, plus a fascinating look at the travel literature that predated the Baedeker for British tourists by historian Maureen McCue.

Instead of our usual house-made holiday gift guide, we reached out to personal shoppers Jana Soon and Maria Bengtsson for their top gift tips around town from artisans and independent stores. Embrace their expertise on pages 12+13.

Farewells and a welcome to end the year: we wish Jane Farrell the very best for her maternity leave, which will begin over Christmas (immaculate timing for young beginnings, Jane, in line with your superb organizational skills!), and Serena Isaac hones her editorial abilities on joining our team as acting deputy editor with the events section within her purview. Tell Serena what you’re up to: events@theflorentine.net / s.isaac@theflorentine.net. Grazie mille to our interns Isabella Paduano, Luca Cosenza and Amelia Hood: we appreciate how much you’ve become part of our team and wish you well for the future.