Formerly Firenze Light Festival, the seasonal celebrations in Florence promoted by the Municipality of Florence and organized by MUS.E Firenze has been renamed Green Line, with the four elements of air, water, earth and fire spreading light and colour across the city from December 7 to January 8, 2023. The annual array of Christmas trees also keeps us cheery, with a dazzling display of festively adorned firs popping up all over.

Under the artistic direction of Sergio Risaliti, the festival takes a green focus with the relationship between humankind and nature at the centre. The artistic installations and events programme also prompt reflections on the connection between heritage and care, with food for thought offered on topics such as ecology, sustainability, climate change and energy-saving. With these themes in mind, the number of light installations has been reduced, switched on from 5.30pm to 10pm.

Monuments and squares in the city get a magical makeover, with light installations, video mapping and projections, as well as a varied line-up of events organized in museums, parks and public spaces. Ponte Vecchio once again gains its highly anticipated display, with this year’s video-mapping curated by the artist and theatre director Giancarlo Cauteruccio, inspired by Ovid’s Metamorphoses. Palazzo Vecchio and piazza della Signoria have been handled by the Florentine creative Stefano Fumasi (The Fake Factory) with the theme of the four elements. Museo Novecento and piazza Santa Maria Novella feature a video projection by artist David Reimondo inspired by Francis of Assisi’s Cantico delle Creature, created in collaboration with Enel X, on show from December 15. Make your way to the Michelozzo courtyard of Palazzo Medici Riccardi for the special effects creating a memorable atmosphere, with the Chamber of Commerce and the gates and towers of the city also donning a festive look for the season.

Centre – via Tornabuoni, and the facade of the Rinascente store in piazza della Repubblica

136 illuminated trees light up piazza Libertà, viale Matteotti, viale Gramsci and piazzale Donatello, with 88 neon led lights on viale Matteotti and viale Gramsci. Energy saved in terms of last year’s display is 33.6%, with a switch-on time of 9 hours instead of 14 and an economic saving of 8.5%.

From December 8, the Sala delle Udienze in Palazzo Vecchio will host the Nativity scene of Camoggiano, created by the Renaissance sculptor Benedetto Buglioni. Composed of a series of terracotta figures, it’s usually on display at the Museo Diocesano di Santo Stefano al Ponte.

December 8-January 8, 2023 The Sala d’Arme in Palazzo Vecchio will host the WONDERFUL exhibition organized by Museo Novecento, exploring the relationship between art and nature. Curated by Stefania Rispoli, the works are by Camilla Alberti (Milan, 1994) and Anouk Chambaz (Lausanne, 1993).

December 15 Palazzo Vecchio is the site for Climate change and heritage, an open forum discussing climate change, the energy crisis, the conservation of cultural heritage, and their influence on museums.

Until March 20, 2023 On display in the 13th century crypt at the Marino Marini Museum is the Seminarium exhibition by Jasper Just, a series of videos looking at the interaction between technology and nature.

December 23 + 24: Una mattina nel parco sees children enjoying a delightful (free) train ride throughout Cascine Park that will end with a very exciting introduction to none other than Santa Claus.

January 6: At 11.30am in piazza della Repubblica, the Befana will descend from the arch of the square and make her way to Rinascente in a festive spectacle to delight all ages. (No reservation required).

At 5.30pm on December 7, the annual Christmas tree lighting will take place. Palazzo Vecchio, Palazzo Medici Riccardi, piazza Duomo, piazza San Firenze, and piazzale Michelangelo will all be illuminated by Christmas trees, officially kicking off the Christmas season here in Florence. The trees (donated by Euroambiente) will be decorated in theme with the rest of the Green Line attractions, taking inspiration from nature and the four elements, curated by Liceo Artistico Alberti-Dante and Liceo Artistico Statale di Porta Romano. In total, 58 trees will be illuminated and decorated throughout the city.

Keep an eye on the Comune’s calendar of festive events. 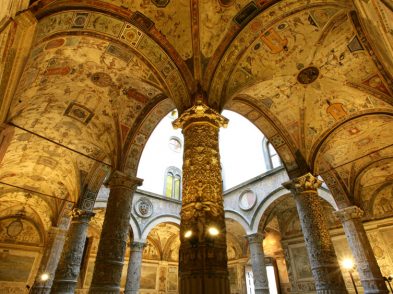