Before Baedeker: how literature opened the door to Italy for British tourists

In the century before Forster’s novel was published, travel underwent a radical transformation. Routes were standardised, the first guidebooks were published and group trips were organised. So, what did people do before Baedeker?

When, in the early chapters of E.M. Forster’s A Room with a View (1908), the young Lucy Honeychurch finds herself alone in Florence without her Baedeker guidebook, she panics. Abandoned by her temporary chaperone, the eccentric Miss Lavish, Lucy despairs, both that she’ll lose her way back to the pensione and that she’ll be unable to decipher Santa Croce’s famed frescos by Giotto or the sepulchral floors praised by Ruskin. While the fear of becoming lost is understandable (who hasn’t felt mild alarm as Google Maps buffers in an unfamiliar city?), Lucy’s blind trust in her Baedeker tells us a lot about the special role literature played in helping English-speaking travellers navigate Italy. In the century before Forster’s novel was published, travel underwent a radical transformation. Routes were standardised, the first guidebooks were published and group trips were organised. In short, the tourist was born. So, what did people do before Baedeker?

From medieval pilgrims wending their way to Rome to the Grand Tourists of the eighteenth century, people from Britain had always travelled to Italy. These types of travel were long, costly and uncomfortable, often serving several purposes. Accompanied by his cicerone, the (usually) male, aristocratic Grand Tourist, for example, would spend three or more years on the continent, forming diplomatic relationships, improving his courtly manners and studying art, so that he could eventually return home to take his seat in Parliament. Mostly interested in Italy’s classical past, he relied on tradition and established social networks for his itinerary. There were far fewer opportunities for women or those of more modest means, but even the freedom of movement enjoyed by the wealthy was severely curtailed by the French Revolutionary and Napoleonic wars (1792-1815).

However, in 1815, the British delivered a decisive victory over the French at Waterloo. Even before the smoke had cleared from the battlefield, British travellers made their way to the continent to take part in this momentous event and it wasn’t long before they set their sights on Italy. Writing in 1826, 12 years after first stepping onto the continent, Mary Wollstonecraft Shelley recalls her compatriots’ excitement:

When peace came […] it was the paramount wish of every English heart, ever addicted to vagabondizing, to hasten to the continent […]: in their numbers, and their eagerness to proceed forward, they might be compared to the Norwegian rats, who always go right on, and when they come to an opposing stream, still pursue their route, till a bridge is formed of the bodies of the drowned, over which the living pass in safety.

Now widowed and living in England, Shelley remembers the “dirty packets” and “wretched inns”, but also the delight of a new passport and the novelty of the Custom-house, which characterised these early days of travel. Published in the Westminster Review, this essay is ostensibly a review of three novels set in Italy. But it highlights an important point in the British relationship with Italy: a moment before mass tourism, when the conception of “Italy” was expanding to include more than its classical past. This is when medieval and Renaissance art, literature and history took on a new importance and when, for Shelley’s own group of British and Italian radical thinkers, it offered space to envision a liberated Europe.

Lord Byron was at the heart of this “Anglo-Italian” circle. One of the first modern celebrities, Byron’s popularity cannot be overstated. When he died in 1824 and his body was returned to England, mourners lined the streets to watch as the funeral procession carried his body through London, north to his Nottinghamshire estate, Newstead Abbey. Part of Byron’s appeal was that his poetry is often set in exotic locales and typically features a broody, solitary anti-hero. This, coupled with his own scandalous life, ignited the public’s imagination, finding a natural fit with imagined Italy. With the help of Ann Radcliffe’s Gothic novels and Germaine de Staël’s bestseller Corinne, ou Italie (1807), Italy was a tantalising place, full of mystery. During the war with France, Italy became almost tangible. Through their expertise in the visual arts, music, language and literature, Italian emigrants added much to British society and its culture. Furthermore, in opposing France, Britain also characterised itself as the champion of Italian liberty.

Byron’s Canto IV of his ‘Childe Harold’s Pilgrimage’ added fuel to this fire. It follows Byron (he had given up trying to separate himself from his character) as he travels from Venice to Rome. It was a typical Grand Tour with all the standard classical sites. But it had a fresh intensity in its emotional reaction to Italy, its past and present condition. The subjective ‘I’—that most Romantic concept—is at the heart of the poem, and he continually meditates on the importance of art and literature for the individual and the collective. This was something new indeed.

His contemporaries began to don Byronic stances as they travelled through Italy, not only visiting the same sites, but also reading his poem in situ. The poem sparked other literary works too. Though lacking the intensity of Canto IV, Samuel Rogers’s Italy—once it was illustrated by Thomas Stothard and JMW Turner—sold well throughout the 19th century. This work had a profound impact on John Ruskin’s conception of both art and Italy. Letitia Elizabeth Landon’s (L.E.L) The Improvisatrice, which centres on a female artist and poet, would inspire Elizabeth Barrett Browning’s Aurora Leigh. 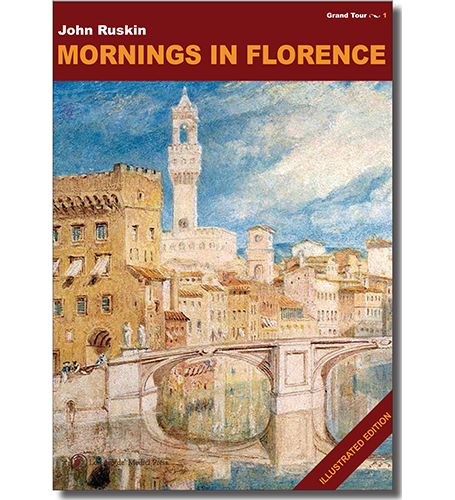 And now, here is a simple but most useful test of your capacity for understanding Florentine sculpture or painting

But Byron’s work shaped travel to Italy in another way, too. As travel was transformed into tourism, tourists needed guidebooks. Before Baedeker, Byron’s publisher John Murray published the first modern guidebook, Hand-book for Travellers on the Continent (1836). Murray gave readers both essential information and extracts of poetry by Byron (and a few others) for Italy’s most important sites, creating an emotional and literary experience for its reader-tourists. So pervasive was this experience that the narrator of Nathaniel Hawthorne’s 1860 The Marble Faun (itself published with the tourist in mind, as it included blank pages for pasting in postcards), lamented that visitors to the Colosseum were “exalting themselves with raptures that were Byron’s and not their own”. This imagined Italy emerged from British Romanticism and would continue to shape the British imagination throughout the 19th century. While Lucy Honeychurch favours her Baedeker over a Murray’s handbook, nonetheless we see the characters throughout Forster’s novel try to unearth Italy whilst wading through their Romantic and Victorian inheritance. Today, our own reasons for exploring Italy may be different, but, like Forster’s characters, Italiam petimus: We seek Italy. 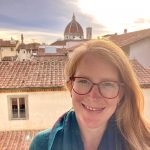 Maureen McCue is a writer, literary scholar and cultural historian, specialising in Romantic-period Britain. Her first book explores the Romantic reception of Italian medieval and Renaissance art. She is currently writing a book on eighteenth-century women artists. She holds a PhD from the University of Glasgow and has taught literature and writing classes in the UK for over a decade.