Chris Dobson has worked in the field of applied arts for nearly 30 years, originally on arms and armour: in 1995 he was appointed as Master Armourer to the Royal Armouries in the UK. His speciality is the Middle Ages and Renaissance in Italy, particularly Florence. In 2013 he published the eBook San Romano, the Art of War, about the great battle paintings of Paolo Uccello. He was consultant to the BBC for The Battle of San Romano, part of the series The Private Life of a Masterpiece. http://www.chrisdobson.net 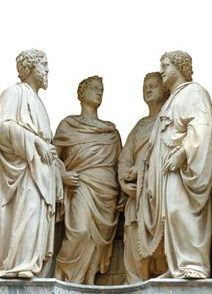 Writing in the fifteenth century, Florentine Gregorio Dati described Orsanmichele as ‘an Oratory of wondrous beauty.’ The old loggia had become an expression of the city’s mercantile power and pride, a place of worship for the trade guilds, who commissioned bronze and marble statues to stand