One morning last spring at the Esselunga’s café in Florence I had met an Englishman and his wife having the coffee we all need before fighting our way down the aisles. They were sitting outside, in part to avoid the noise coming from two Italian children standing on a table arguing over which colour straws they wanted.

The couple rolled their eyes and then went on to discuss their neighbours’ young kids, who often stayed up until 11pm and then cried in the morning when they were made to get up and go to school. Ours were always in bed by 7pm, 8pm at the latest. Because I am English, I couldn’t help but agree.

This opening topic of conversation between us had made me laugh unaware of our ability to immediately conform to stereotypes (and yes, we did talk about the weather, too). We English are conscious of our obsession with sleep and timekeeping and our dismay at Italians who keep their kids up past ‘bedtime.’

Our Canadian friends have berated us for this obsession, not least because it has interfered with our ability to socialize with them. They, like many Italians, are willing to take their three- and five-year-olds out for dinner at 8pm. We English break out in a cold sweat if our children are not safely tucked up in bed by then with the lights off. As a result, we have missed many a convivial meal in order to keep the darlings well rested for school the next day.

At times, we try to be a bit more relaxed and, dare I say it, Italian about these things, but it’s hard. We’re English. We do things differently, don’t we?

Last spring, we had to take the baby to the doctor. I say ‘had to’: we went because, after five days, her fever hadn’t gone and the viscous flow from her nose was showing no signs of abating. We walked in, proudly explaining that our baby was now one year old and hadn’t seen a doctor since the neonatal ward. ‘That is so English,’ said the doctor. ‘An Italian mamma would have brought her in at the first sign of a cold,’ he explained to us while inspecting her for signs of neglect, ‘but you English do things differently, don’t you?’

We do. And during our stay in Italy, we had plenty of time to wonder if we do things wrong. Our cleaning lady in Florence had no doubt that we do.

When she had found out about the baby’s cold, she voiced her concern and sympathy, then quickly explained the cause of the illness: ‘Well, of course she’s sick, you let her sit on the patio outside last week. In April! ‘ We shrugged and tried to look grateful for her advice while inwardly dismissing her simplistic explanation. After she left, I immediately went online to check if she may have been right.

Differing opinions on acceptable patio temperatures are to be expected. We grew up in a country where paddling (albeit in sweaters) in the 10 degree North Sea at Easter was not unusual. Here, in Florence, we were confused by how early the public swimming pools closed at the end of the summer. It seemed warm enough to sunbathe to us, though swimming means getting wet, and wetness, as we know, is something to be avoided in Italy.

Late last year, the baby had another cold (no doubt brought on by a cold floor or a gust of wind). This one had given her a blocked nose and made breastfeeding for her difficult. At the pharmacist, my wife got some saline solution to flush out her nostrils, something we or our elder two children had never experienced. Another mother from our kids’ school was also there to offer advice: ‘You mean you don’t wash the kids’ nostrils out at night? We do it every night. You get all sorts of dirt and mucus up there!’

We laughed at this and poked fun at another example of Italian ‘eccentricity,’ but then went home and surfed the web looking for whether this was in fact sensible behaviour. Could this nasal cleansing actually have some kind of beneficial effect on the kids’ health? Were our slovenly English ways resulting in the barrage of coughs and colds experienced by our children?

Back home in Cambridge, we know a few Italian families and one of them is infamous among our friends for their overcautious grandmother. They live opposite a beautiful green open space, ideal for playing football, tossing a Frisbee or being chased by imaginary enemies. When nonna is around, though, the kids have a real enemy to escape. And that reason is nonna’s hairdryer. For, when they return from their outdoor games, nonna strips them down to blow-dry the sweat from their bodies. This is to avoid the fatal combination of the child’s damp skin and the colpo d’aria-a concept so alien to us English that the story has reached the status of myth in various colleges and departments at Cambridge University.

Maybe it’s because we English are so busy worrying about how much sleep our children are getting that we don’t have time to worry about the temperature or malignant breezes. According to Italian friends, we are, as a nation, seemingly well known for putting our children outside in the colder months for fresh air, as though to purposefully contradict the Italian way of doing things.

Living abroad in a society that, in many ways, resembles your own means that these petty differences often stand out perhaps more than they should. Familiarity is reassuring but rarely piques your interest. After all, no one back home wants to hear how similar everyone is to us. They want to know that air is considered a mortal enemy of health across the pond-that strange critters lurk in it and crawl up small noses. These are the differences that made our life in Florence more colourful.Without them adventures abroad would be much less appealing.

Dan Woodford leads a charmed life though is usually able to find something to complain about. He is spending the year in Florence eating tripe, changing nappies and tweeting about it whilst the mother of his children reads dusty old books and manuscripts and writes about them. 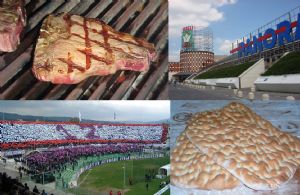 Last autumn, having just arrived in Florence, I was walking through the city with some colleagues of my wife, all Renaissance scholars. Noticing the glass façade of the restaurant Alle Murate, I remarked, ‘Oh, that's where it is.' ‘Have you not been there yet?' they 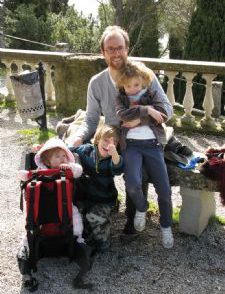 I was in the COOP carrying a basket in one hand and steering a buggy (‘stroller’ to our American readers) with the other. Having already loaded the basket with heavy ...