With its 4km-long, white sandy beach and crystal-clear waters, Vada, a popular spot for locals and tourists alike, is called by many the Caribbean of the Tyrrenhian Sea. The whiteness of the town’s spiagge bianche is not a gift of nature, however, but an effect of the bicarbonate manufacturing plant in Rosignano Marittimo, just north of Vada. Nonetheless, the Vada coastal area, surrounded by wild Mediterranean brush, continues to be awarded the Blue Flag (www.blueflag.org) yearly for its clean beaches. Whether you swim or suntan (bring lots of sun protection!), this beach is still a definite must-see for its singularity and Caribbean-like feel.

‘Two hundred meters,’ the bus driver said, dropping me off on the side of the road near the spiaggia bianca (‘white beach’). ‘You walk,’ he said, making the gesture where his fingers tiptoe across the palm of his hand.

And it was a good day for a walk, too. I was on my way to the white-sand-and-crystal-blue-water beach on the Etruscan coast near the town of Vada, about 28 miles south of Livorno. To get there from Florence by public transit, take the train to Livorno, then catch the southbound Cecina bus, which looks like a big royal-blue charter bus. Make sure to sit as close to the driver as possible and remind him to drop you off at the spiaggia bianca.

On the quiet path to the beach, located between Vada and Rosignano Solvay to the north, I passed a hollowed-out building. It was not an Etruscan ruin, but it was certainly antique by my (American) standards. The stillness and calm combined with the crumbling structure in the foreground put me in a nostalgic mood.

At the beach, two young parents watched as their toddler bounds across the sand. Vendors sold sunglasses out of a backpack. Windsurfers-at least two dozen-dotted the horizon with colors. Not even the nearby factory, with its puffs of white smoke, could spoil this scene.

Two university students sunbathing on orange towels, then took a break to eat cantaloupe. A couple of young guys, one wearing a Hard Rock Café shirt, the other in a Panama Jack hat, joined them. The four of them make conversation with me, living up to the Italian reputation for friendliness.

The young women are from Florence, the men from the Tuscan countryside. ‘There are lots of beaches in Tuscany,’ I said. ‘Why do you come to this one?’ The guy in the hat picks up a handful of sand and lets it run, slowly, through his fingers, like an hourglass. ‘Bianca,’ he replied.

Behind us, the reeds bended in the wind. It cooled off at 4 o’clock, and the students put on more layers. Dark clouds passed by overhead, but ultimately dropped their rain elsewhere. A vendor came by and tossed a bracelet at my feet. ‘I don’t have any money,’ I say, by which I meant, ‘I don’t have any money for bracelets.’ ‘No problem,’ he said. ‘Peace and love. Peace and love.’

Despite my big aviator sunglasses-which I purchased to try to fit in more with the natives-the wind managed to get sand into my eyes. I didn’t mind.

I said goodbye to the four students and took a healthy two- or three-mile walk along the bike path from the beach to the nearby town of Vada. If you don’t have a car, you need to either make the return journey back to Florence in the afternoon or spend the night in Vada. There’s not much by way of bus service after 7pm, which I found out the hard way.

When the restaurants in Vada opened for dinner, I ate some world-class lasagna at a restaurant called La Saletta. But before that, I had some time to kill, so I took a stroll around Vada’s well-manicured Piazza Garibaldi, which has the San Leopoldo church as its centerpiece.

Exploring the town, I was still in a nostalgic mood, noting that life is fleeting and ephemeral, like the wind on the Vada beach. In fact, isn’t life uncertain enough to eat dessert before dinner? Yes, I decided. And luckily for me, there was a place called La Dogana, which was a gelateria … and a creperia. Creperia? I didn’t even know such places existed! As I walked in, I saw a menu featuring at least 20 different crepes. It took me a while to choose, but I finally settled on the ‘nutella.’

A customer in his fifties made conversation with me, asking me where I was from. ‘Stati uniti,’ I said. ‘Ah, yes, very friendly people,’ he replied, adding, ‘American women-they break-a my heart!’

He told me a few more things he liked about America. And then, like the wind on the Vada beach, he was gone. 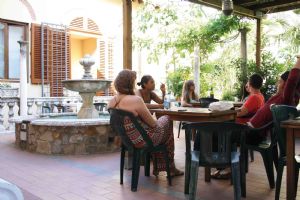 A fresh influx of newly arrived study abroad students to Florence this fall means many new visitors to the city. Students from abroad bring not only a new culture, language and perspective, but also their visiting friends and relatives from back home, all of whom use the opportunity to see