D.H. Lawrence and the Florentine critters

D.H. Lawrence led me back to Florence. I’d visited briefly before, but returned in November 2019—a world away now—on a research trip for my next poetry collection, A Whistling of Birds, a collaboration with artist Douglas Robertson inspired by D.H. Lawrence and his nature writing, and Lawrence’s poems in Birds, Beasts and Flowers in particular. Lawrence was repeatedly drawn to Italy and wrote the early poems of the collection (and later Lady Chatterley’s Lover) while living in the area.

Lady Chatterley’s Lover also lured me back to the city. On a walking holiday in the Cinque Terre I’d chanced upon a special edition produced by Florence’s Plaza Hotel Lucchesi. I spotted it on the “book swap” shelf of a hotel in Monterosso and felt compelled to take it onward with me. As a great walker and traveller, I feel Lawrence would have appreciated this chance encounter and a journey that came full circle back to Florence, where his controversial novel was also printed.

In the introduction about Lawrence’s Florentine links, I discovered that Lawrence had stayed in the hotel back when it was the Pension Lucchesi. It was a joy to book into the Lucchesi too and have enthusiastic conversations about Lawrence and Florentine history with the ebullient manager, Giancarlo Carniani.

As I happily reacquainted myself with Il Porcellino in the Nuovo Mercato, I felt sure that the statue would have fascinated Lorenzo the nature lover too. I was also thrilled to learn more about Lawrence’s passion for the Etruscans and their art, seeing beautiful, playful and moving artefacts in the Museo Archeologico.

I began writing the poem ‘My Sweet Fiorenza’ while in the city, a flow of thought from a stream of intense impressions, including Dante, the Etruscans, Neptune and David, Il Porcellino and its little critters, and a crab-shaped silver ring I bought at the Argenteria Sacchi when I first walked along the Arno to the hotel. Back then the only real threats seemed to be the rising tide of the river and the human flood of tourists to Airbnb apartments, driving local residents from their own city centre. I passed a demonstration about this as I headed off, regretfully, to catch the train back to Pisa.

I had finally, fully fallen for the city. My husband and I were meant to return in April 2020 for our silver wedding anniversary, but Covid-19 intervened, stopping all travel. With Italy and Florence much on my mind as I worked and wrote during the first pandemic lockdown at home in Cambridge, the final stanzas formed themselves.

My Lawrence journey continues and will keep circling back to Florence. In September 2020, in a brief late-summer spell between UK lockdowns, when travel was permitted, my husband and I finally made it to Florence for our belated anniversary celebration, exactly a century after Lawrence began writing his Birds, Beasts and Flowers poems there. The Lucchesi felt like a gracious old friend and thanks to Simon Gammell and Giulia Galeazzi at The British Institute of Florence’s library I was able to see some wonderful Lawrentian early editions as well.

I long to visit again, but for now Douglas Robertson’s beautifully detailed Il Porcellino pencil drawing for A Whistling of Birds is both a consolation and an enticement to return.

‘My Sweet Fiorenza’, from A Whistling of Birds 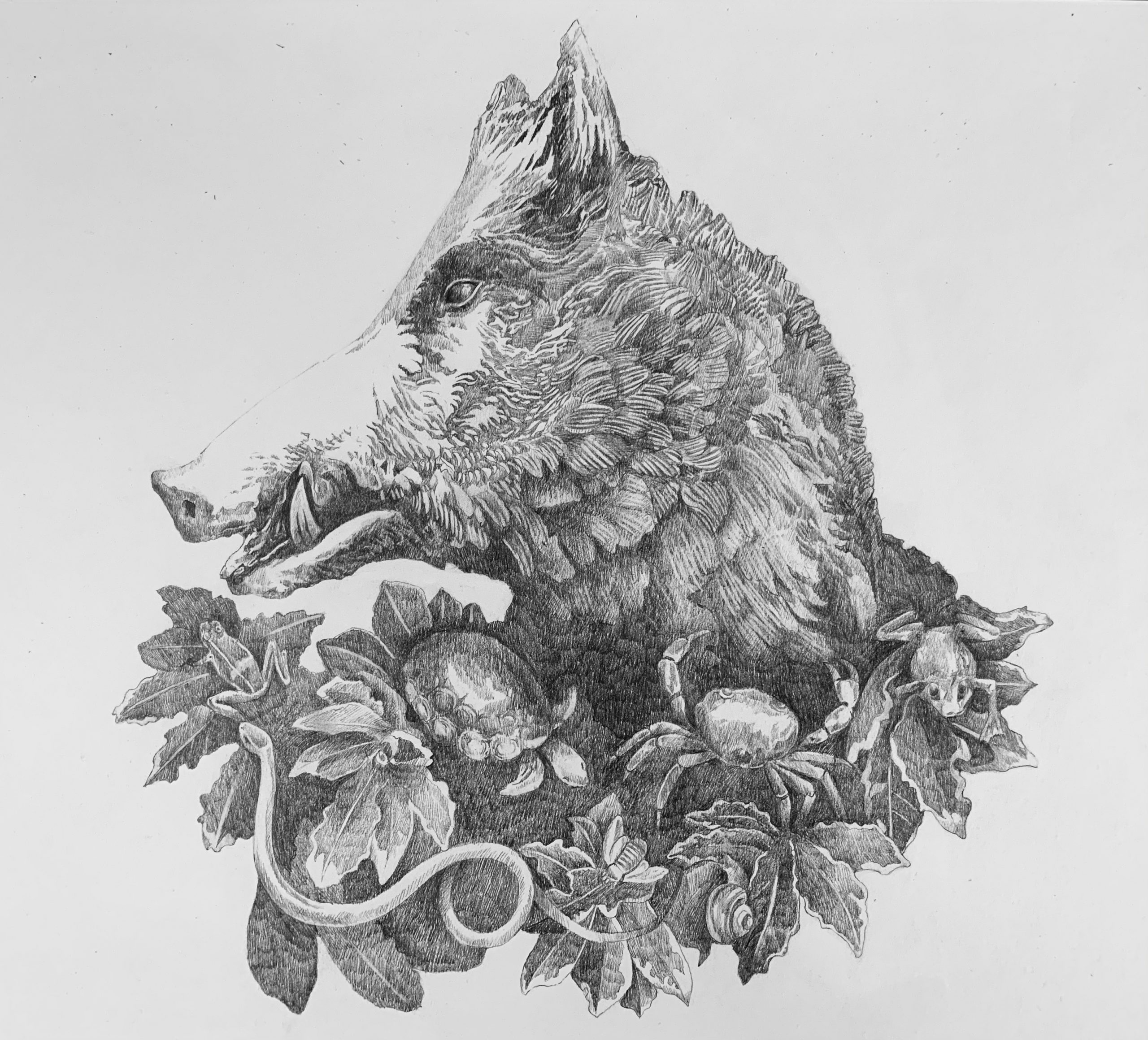 Scottish artist Douglas Robertson is known for his artistic collaborations with many of Britain’s best poets. His collaborations with Donald S. Murray, The Guga Stone and Herring Tales, were included in the Guardian’s Best Nature Books of 2013 and 2015. Doug and Isobel are working together on a project inspired by D.H. Lawrence’s nature poetry and his 1923 collection Birds, Beasts and Flowers, which will result in an exhibition, performance and a collection of poems with illustrations titled “A Whistling of Birds”. www.douglasrobertson.co.uk

Forget about David, Neptune is King –

but the Boar is the Lord of them all,

haunching down in the market,

a grin on his glistening, smooth-polished snout,

with all of his slippery, scuttling,

True Etruschi, they know him, this earthy god

with all of his humble ones – frog,

setting coins in his toothy mouth,

laughing, as they tinkle through the grate,

The sparrows on the Arno walls wish only

for more crumbs: they are sure

in their numbers, an ancient feathered line.

flit-flit – fool tourists, where we swoop and perch

and peck at will among the dolci e panini of Finisterrae.

The woman on the step holds out her paper cup,

rattling her damnable coins through my veins

and the church, swollen with its own mythology,

is too tight for my thoughts. For once

I let the candles be, head for the blessed air.

and Beatrice is bored beyond belief,

another biddable flock come in to gawp.

Stay with us Lord because it is coming the night.

All the sad petitioners and the paintings

are so bad. The letters sometimes sweet,

do they go? Plead with the Agony Aunt

of Silences, a silence sifting down the centuries –

protect our love, let me not always walk alone.

I think of courage, flood and flow.

This too shall pass, these stormy currencies.

I searched a hundred crowded vitrines till I found

a little terracotta tartaruga that I knew

was waiting for discovery, again.

Tortoise renaissance, now behind the glass:

I wish I’d been the one to lift it, gently brush it off.

Did I forget the snails? No, they make their way,

soft souls in brittle shells, except

these, bronzed, are vouchsafed for the ages,

and the hardy tortoise too, nudging an earthworm

as he no-mo trundles past the shapes

that could be acorn leaves, or traceries of purloined frogs.

of the tower-block windowsill. But these

are not the crowning myrtle-ivy garlands

that we had in mind, these grappling thorns

and coins – Forgive me, Lord, I came so close,

keeping on, redoubled on his plinth –

iron survivor of the time and tides –

as through some far Italian street, Liguria or Bergamo,

& the plucky crab who, coruscating, waved

a pock-marked pincer from the river argenteria

made his escape, my index finger

we will return. Passing through this nebula,

trying to love and breathe, our several eyes

fixed on the distant platter

of the more-than-ever-silvered evening moon. 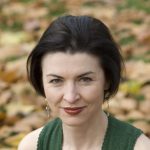 Isobel Dixon’s debut collection, Weather Eye, won the Olive Schreiner Prize in her native South Africa. Recent works include a pamphlet, The Leonids, published by Mariscat and a collection, Bearings, published by Nine Arches (who also re-issued her earlier collections A Fold in the Map and The Tempest Prognosticator). Nine Arches will publish The Landing, about her mother, in 2022. Readings of her work are recorded on the Poetry Archive. She is working on a new collection, A Whistling of Birds, inspired by D.H. Lawrence’s Birds, Beasts and Flowers, linked to a collaboration with Scottish artist Douglas Robertson and American composer Stephen Montague. Her poems have appeared in international publications like the Paris Review, The Guardian, Prairie Schooner, The Hudson Review, Harvard Review, New Statesman and the Places of Poetry anthology (Oneworld, 2020). She lives in Cambridge, England and is Head of Books at the Blake Friedmann Literary Agency in London. www.isobeldixon.com