Friends come and go in this life. Connections wax and wane. Don’t ever let anyone tell you that you can direct and drive their paths. You can’t. But you can be open to their appearance on the stage where you direct the theater piece of your life. Siblings may disappear. Friends recede under the waves. Older relatives come back into your life as friends, or new older friends are sometimes found. We treasure older friends for their perspective and calm. People who have made it into their seventies and eighties with their minds intact have seen all of life’s rich pageant. 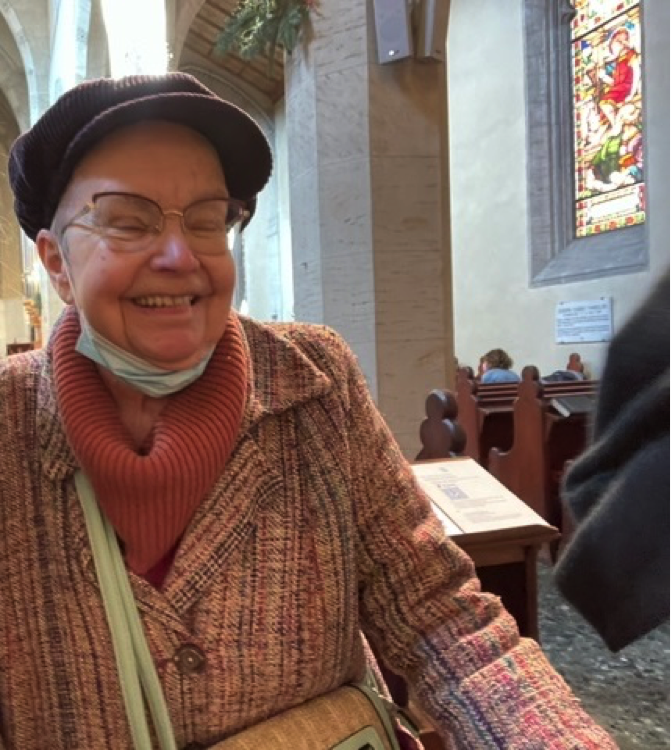 I met Elisabeth Robbins Cole at St. James Episcopal Church in Florence in September 2018 at a volunteer appreciation breakfast. A confident voice held forth from the end of a table. Who could it be? Was it really emanating from this diminutive, cheerful woman with the short light hair? I introduced myself. “Call me Liz,” she demanded. I said she reminded me of my grandmother Esther (true). Liz was not offended. Later, I shared with her a luminous picture of my grandmother, taken sometime in the thirties. Liz blinked and said I’d paid her too great a compliment.

Liz was born in Springfield, Ohio on December 24, 1939. A cradle Episcopalian, her home parish was Christ Church Episcopal in Springfield, OH. Her great-great grandfather helped found Christ Church Episcopal in 1834 and was called as its first priest. She attended the Ridgewood School in Springfield until she was 12, then boarded at Miss Porter’s School in Farmington, Connecticut, where she completed high school. Her Yankee roots were deep, but they were no match for Tuscany.

Liz first arrived in Florence in the autumn of 1959 on a steamship with the junior year abroad program at Smith College. She was an art historian and a reader, a writer who loved literature. Liz graduated from Smith College in 1961 with a degree in Art History. She had Italy deep in her blood and continued her studies at Middlebury College in Vermont, finishing a master’s degree in Italian in 1962. In Liz’s words, “I worked professionally as an art historian in San Francisco and Boston. I returned per bene to Florence in mid-May 1968, when the whole world was in an uproar over students’ rights, Vietnam, workers’ rights, everything. One of my first jobs here was with an American, who was active in St. James. I soon found myself typing vestry minutes and almost immediately dealing with all the unfinished business left over from the 1966 flood damage. Architects, insurance, fine arts. After my father (Fred Cole) died in 1974, my mother (Elisabeth Robbins Cole) began to come to visit me in Florence for longer visits until she passed away in 2002.”

Her husband Alfonso Carpentieri (b. 1932 in Andria, Bari) was a well-known and gifted photographer. They were married in the Palazzo Vecchio in 1975. Alfonso preceded her in death in 2007. They did not have children, but Liz counted many young people in her network who were like children to her. 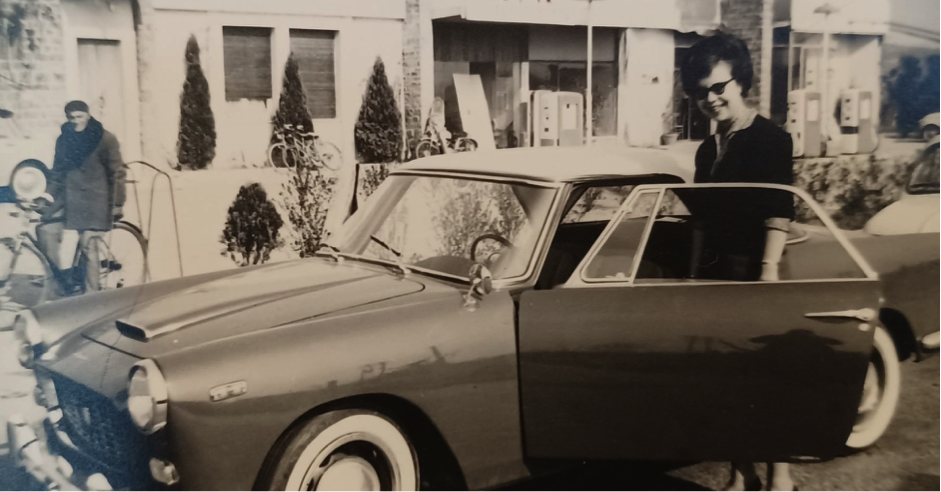 At our weekly coffee in her frescoed library just a stone’s throw from San Lorenzo, Liz regaled me with tales of the recovery from the 1966 flood, the author Muriel Spark, and more. I borrowed books. A lot of books. Her bookshelves alone were a story unto themselves, packed and layered, the collection of a woman who’d been reading her whole life. We talked about current TV we liked, trips we’d taken and wanted to take, parenting and children. She was especially interested in my children and asked about them often. Liz and I had a lot in common. The midwestern upbringing. Our travel bugs. Her book clubs and general resilience. The social network that predated and superseded social media. Liz was the glue that held many friendships and groups together. Liz seemed to know everyone. She was an original member of Democrats Abroad of Italy. Liz was hands-down great with children in a genuine way. Patient, kind, direct, respectful.

I saw Liz regularly at St. James, but our weekly espresso dates were the highlight of my week. Although she was game to receive offerings of my fresh-baked goods, she confided one afternoon, “Always eat fruit with your afternoon espresso, never pastry, and you’ll live to be a hundred.” Her phone never stopped ringing. I kept bringing her pastries, small offerings, and tales from my life. I did not ask her if she drank espresso with my pastries, nor at what time of day she consumed them. I amused her with my anecdotes. I was spellbound by hers.

The pandemic was hard for Liz. Her old friends struggled to come into town to visit her, what with lockdowns and quarantines and old-fashioned caution. She had a live-in badante, who made sure she was independent to the end—as free as she could be. If her body failed her, her mind was unfailingly sharp and inquisitive. I maintained our weekly coffee date, but entered into a quarantine before the holidays and then the Omicron wave in Tuscany kept me away out of concern for her safety. Liz and I continued to email and text as always, just checking in. How are the kids? What are you baking? When are we catching up next?

When I received the message that Liz was in the hospital on Monday evening, I immediately messaged her. I am worried – are you okay? No response. I was in the park chasing my daughter on her bike. Dinner was prepping. Our apartment was warm. I missed a call from our priest in the after-school chaos. A pit yawned in my gut. I knew what the call was about. It’s usually not good news when your priest calls you during dinner. I responded and said I’d get back to him. But part of me just wanted to suspend the moment between not knowing and knowing. He called me back a bit later and said that Liz had died suddenly. 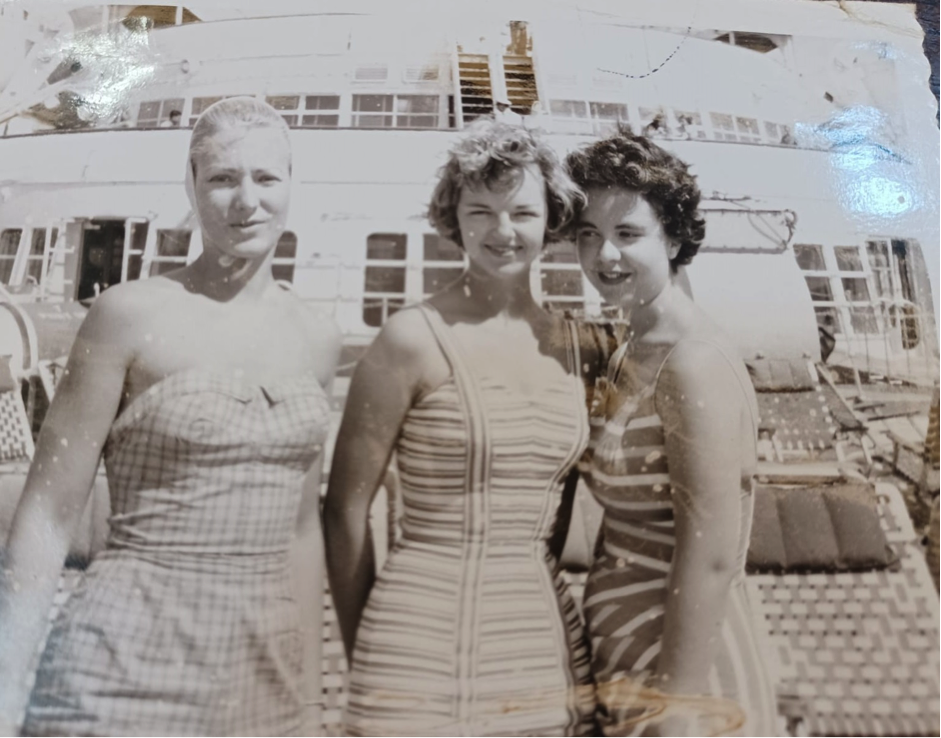 I checked my phone and saw that she’d received my worried message, but had not responded. I sent it just before she died. A flurry of messages and emails flitted through my phone. It couldn’t seem real. How can a force of nature just wink out like a light? A woman who lived in Italy for over fifty years—she should by rights have another two decades.

There was visitation beginning at 9:30 Tuesday at the Ofisa chapel in Rifredi. I took the tram there. The area is unfamiliar to me. I knew I was in the right place when a Maserati hearse pulled out of the Ofisa garage. In Italy, you go out in style. I didn’t even know a Maserati hearse was a thing. I stopped in the tenth-century pieve of Santo Stefano in Pane to light a candle. After I sat in the church a good long while, I walked back out on via delle Panche to the Ofisa. The address was in a strange place, behind a collection of mechanic garages and (ironically) storage units. A collection of numbered chapels fanned out around a graveled garden. The names of the deceased were on a marquee. Elisabeth Robbins Cole, Cappella III. A garden attendant in a coat and a mask barely gave me a glance. Wrought-iron chairs and tables were arranged on a modest patio outside of each chapel, with clean ashtrays. The door was open. The room was beautiful. New and neat as a pin, with everything a mourner might need: a box of tissues, hard candies, a registry, and most importantly, the body in a chilled closet behind glass double doors. No attendants, no sign-in, no weirdness. It was dignified. The fragrance of synthetic lilies was overwhelming.

I sat with Liz for almost an hour. She looked very, very small, but good, like she was just napping on a satin pillow. I cried. We chatted in a way we hadn’t been able to, thanks to Covid and the rest of it. I wrote in my journal for a while. I thought she would appreciate the moment of quiet that her repose occasioned for me. After we got all caught up, I put my gloves back on, slipped my journal and pen back into my bag, and excused myself back into the stream of life.

Thank you, Liz, for opening your heart and your home to so many in Florence. Your memory will be a blessing. May you rest in peace—you’ve earned it. May you please also continue to shake things up, wherever you are.

The funeral service for Elisabeth Robbins Cole took place on January 20, 2022, at 11am at St. James Episcopal Church of Florence, Italy on via Rucellai. At her wish, her remains were cremated. Interment will be in the English Cemetery in piazzale Donatello on Saturday, January 29, at 12 noon.

Parts of this homage appeared in an edited format on sharpmonica.com. 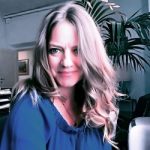 Monica Sharp lives and works in Florence, Italy. An old hand at the European life, she has resided in Spain and France. Italy has been her cultural north star since 2004. Read her musings at www.sharpmonica.com.