Full of cultural, geological and natural history, the island of Capraia is truly one of Tuscany’s most magnificent locations. One of the seven islands of the Tuscan Archipelago National Park, Capraia was formed, according to ancient legend, when the Tyrrhenian Venus, the god-dess of beauty and love, 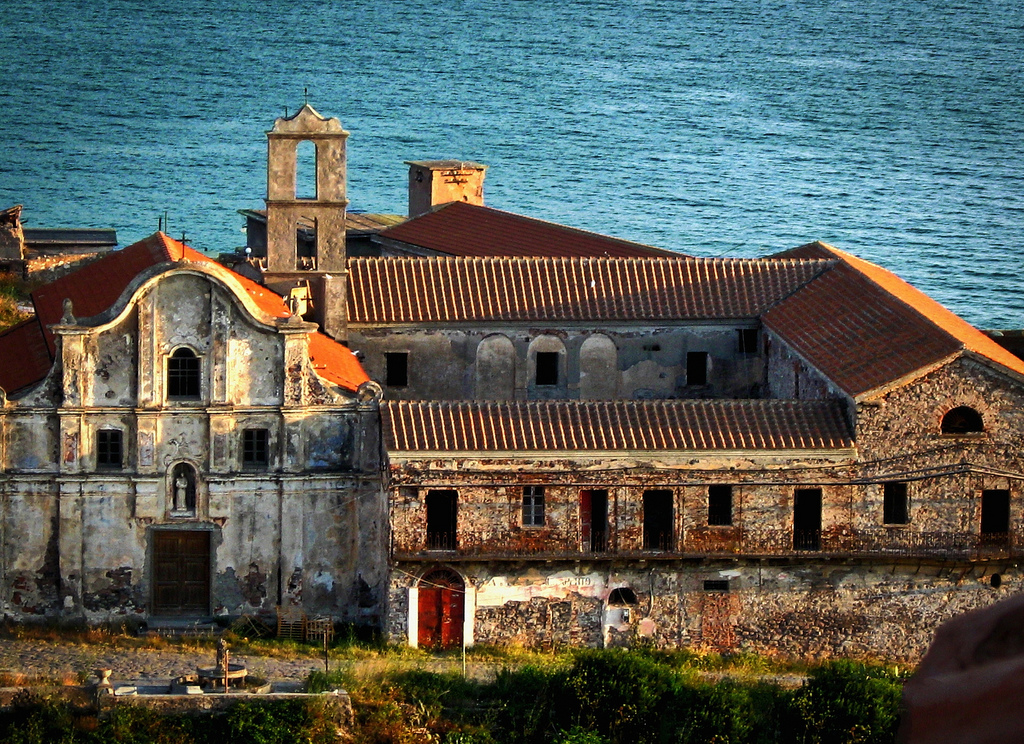 Full of cultural, geological and natural history, the island of Capraia is truly one of Tuscany’s most magnificent locations. One of the seven islands of the Tuscan Archipelago National Park, Capraia was formed, according to ancient legend, when the Tyrrhenian Venus, the goddess of beauty and love, came out of the sea and seven gemstones fell from her tiara, each becoming one of the islands. In fact, each island has its own unique geological history and that is what makes the landscape and ecology of this national park particularly diverse.

Capraia was formed as a result of two volcanic eruptions occurring between 4.5 and 9.5 million years ago. Its volcanic nature is evident in the deep red and black rocks that scatter the coastline and the island’s interior. One of the most spectacular locations on the island is Cala Rossa (Red Cove) at the southern-most tip of the island, where the effects of the volcanic eruptions can be seen in the dramatic red and white bicoloured cliffs meeting the sea.

Capraia lies in the midst of the largest marine protected area in Europe, making it a prime spot for diving and snorkelling. Snorkelling spots can be reached either by boat or by taking one of the numerous walking trails which wind their way across the island through the wild vegetation and rocky summits. The sea surrounding Capraia is colourful and full of many diverse types of marine life. One characteristic aspect of the Mediterranean marine ecology that can be seen in the shallow waters surrounding the rocky coast are the Posidonia fields. Posidonia are one of the few marine plants, characterised by their roots and flowers. Their dense ribbon-like leaves provide a protective environment for a variety of marine life, including many species of fish, algae and invertebrates. While exploring the underwater world, you may come across the slimy, snake-like Moray eel. Largely nocturnal, it lives in crevasses within rocks during the day and slithers its way out during the night to feed on fish and crabs. These animals are predators and can bite if disturbed, so they are best admired from a distance!

Capraia is home to several endemic and rare species exclusive to the archipelago, which is typical of such geographically isolated locations. The presence of endemic species is one of the key reasons why Capraia is protected and preserved as a national park, as the loss of these species would result in considerable loss of biodiversity within the Tuscan Archipelago. The most common of the endemic species on Capraia are two species of gastropod molluscs, and one of the most unique species exclusive to the archipelago is the Tyrrhenian tree toad. The ancient colonisation of the island is evident on arrival into the port. The magnificent Forte San Giorgio, an Etruscan-Roman  fortress, lies on a cliff overlooking the town and the sea.  The island is scattered with ancient watchtowers, Roman roads and Romanesque churches, often in the most unexpected and isolated locations, acting as a reminder of the ancient civilisations that have occupied this striking location in the past.

There is only 800 metres of paved road, running between the only populated areas on the island, the port and the town, leaving the majority of this 19-square-kilometre island largely inaccessible. Walking trails offer the opportunity to explore the most pristine areas of the national park and to immerse yourself in the natural beauty so unique to Capraia. Being of a volcanic nature, the island is fairly mountainous, with its highest peak reaching 445 metres at Monte Castello. Some of the trails are therefore more challenging. Capraia has a year-round population of only 350 residents but receives thousands of visitors. Despite its growing popularity, the island still retains a quaint ambience and is not the least bit spoilt by tourism.

Besides tourism, the islands main industries are the production of wine from a small terraced vineyard in the centre of the island, known as La Piana, and anchovy fishing. The island can be accessed by ferry from Livorno. The ferry runs twice a day and takes two hours, but be sure to check the weather forecast because the ferry is often cancelled due to strong winds.

Britt Alexander is a Biology student at the University of Bristol, UK. When she's not studying she enjoys travelling around the world and discovering new places and cultures. She spent the past summer living and working in Florence.