Foppish dandy Eustace Tilley, with his exaggerated top hat, morning coat and high-collared shirt who scrutinises a pretty butterfly through his monocle, has been the mascot of The New Yorker magazine since it was first published in 1925 and still appears on its anniversary issues. The publication’s first art director and cartoonist Rea Irvin based his caricature on an 1834 drawing of Alfred, Count d’Orsay he had found in the eleventh edition of the Encyclopaedia Britannica. Rivalled only by George Bryan “Beau” Brummel, d’Orsay was the undisputed arbiter of dress and fashion of the first half of the nineteenth century. A perfume was named after him (it’s still available), as well as a carriage and a shoe the count designed, which exposes the sensuous curved instep of the foot. But far from being just a pretty popinjay, d’Orsay was also a painter and sculptor. 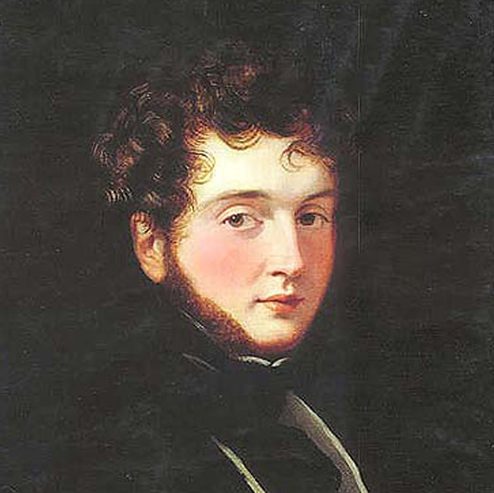 Fathered by Albert Gaspard Grimaud, Count d’Orsay, a general in Bonaparte’s army and one of the handsomest men of his time, Alfred Guillaume Gabriel, Count d’Orsay was born in Paris on September 4, 1801. His mother, Eleanore de Franquemont, was the illegitimate daughter of Karl II Eugen Herzog von Württemberg and Italian actress Anna Franchi. Despite his lifelong imperialist sympathies, after the restoration of the Bourbon monarchy, d’Orsay joined the French army in 1821 and that year was sent to the opulent coronation of George IV in London as one of the royal household’s guardsmen to Louis XVIII. The following year, stationed in Valence on the Rhône, d’Orsay met the absentee Irish nobleman, Charles Gardiner, 1st Earl of Blessington and his beautiful second wife Marguerite, Countess of Blessington, a writer and literary hostess. Both were so charmed by his good looks, legendary elegance and wit that scholars believe each of them was soon involved in sexual relations with the count.

Resigning from the military in February 1823, d’Orsay joined the Blessingtons on a trip to Italy. They settled for four months in Genoa, where they met Byron, who not only sat for d’Orsay for his last portrait but also provided the material for Lady Blessington’s Conversations with Lord Byron, which was published in 1834 due to the gentlewoman’s dwindling finances. Next, they moved to Naples where they stayed for four years, except for a brief period (from mid 1826 until the end of the year) when they sojourned in Florence renting an apartment in Casa Pecori on via dei Ginori.

Fluent in Italian and German as well as French and English, d’Orsay was in his social element. Thanks to the reputation he had gained from painting Byron’s portrait, the count received many commissions to paint or sculpt busts of Florentine notables and members of the foreign community. One such bust so enchanted its sitter, the politician and poet Alphonse de Lamartine, that he dedicated a poem to him. There, he also became a close friend of the English writer and poet Walter Savage Landor, the two men continuing to correspond until the Frenchman’s death.

In December 1827, whilst still in Naples, d’Orsay married Lady Harriet Frances Gardiner, the earl’s 15-year-old daughter by his first marriage to whom he had been betrothed since she was just 11. A year later, the two couples moved to Paris where, in 1829, the bride’s father died suddenly at age 46. Though d’Orsay’s marriage had been a convenient front for hiding his affair with Marguerite Blessington, he and his wife were granted a legal separation in 1838. To be free of him, Lady Harriet paid out £100,000 to some of the count’s creditors, for which he renounced all claims to the Blessington estate.

For two decades after their return to London in 1831, the illicit pair lived lavishly in houses next door to each other, first in Mayfair and then in Kensington where the political, scientific, literary and artistic elite flocked to Lady Blessington’s salon. Here, d’Orsay exploited his innumerable acquaintances. He painted portraits of the young Queen Victoria and the Duke of Wellington, who declared, “At last I have been painted like a gentleman! I’ll never sit to any one else!”—and he never did. Talented and successful, especially as the engravings of the images of his famous clients proved popular, d’Orsay never achieved artistic greatness, however.

Always living far beyond his means, in 1849, d’Orsay was forced to flee to Paris with only a single portmanteau and his gem-set umbrella to escape arrest for his mountain of debts. Lady Blessington, who had taken up serious writing after her husband’s death reduced her income drastically, soon followed him. Unexpectedly, within a month of her arrival, on June 4, 1849, at age 60 she died of a seizure, complicated by heart disease, leaving d’Orsay desolate.

In the French capital, d’Orsay rented a vast studio and began working again taking advantage of old contacts until his friend, the president of the French republic, Prince Louis Napoleon, eventually appointed him director of the fine arts. It was only a fleeting reprise as, on August 4, 1852, he died of a spinal infection. The “archangel of dandyism”, as Lamartine called him, was buried at Chambourcy, near St. Germain-en-Laye, in the grey stone pyramid-shaped mausoleum he had built in memory of Lady Blessington.