The Tuscans talk, Bob Hesse believed, the way most people spend money. And whether the speaker is stingy or lavish, they are always clear about how much their words are worth. Bob was once called “bischero” by a Florentine newsagent who thought he best wise up and count his change. From that day on, it was the only newsstand Bob would patronize. An affectionate insult is proof of belonging.

The word “bischero” has a story behind it, of course. In fact, Bob would tell you that everything has a story behind it. Providing an answer, forming an opinion, arguing one’s side—all these things interested him little. “Where’s the story?” he’d always ask. And if you weren’t sure, he’d take you far and wide until you found it.

In medieval times, when the Bischero family had entitlement coursing through their veins instead of blood, they refused to sell their property to the City of Florence, which needed the plot to complete the ever-expanding Duomo. The stalling continued until a mysterious fire burned their palazzi to the ground and the government seized the unsold land for no more than a few fiorini.

Bob loved that story. And he adored being called a Tuscan fool. “This might not have been the case for ole Bischero, but some of the best things I’ve done in life were labeled naïve or stupid by those who wouldn’t follow my lead,” he would say. This is the man who first earned himself a spot in United States Seventh Army Symphony stationed in Stuttgart by telling the conductor that he knew how to play pie plates. “In the end, I became manager,” he said. “I had no use for war and I suppose they figured that a guy with the guts to play pie plates in public could be counted on in a crisis.”

Even while Senior Vice President at UNICEF, he was considered naïve for conceiving what ended up being one of the organization’s brightest fund-raising ideas of all time. World travellers will remember donating unspent foreign coins before leaving the airplane—well, that was Bob’s idea. It strikes me now: the man who got scolded for not counting his change actually conceived the “Change for Good” program.

Bob did his own share of good here in Florence as Vice Chair of the Advancing Women Artists Foundation. While his partner Jane Fortune spearheaded the search for Florence’s “invisible” women artists, Bob supported her efforts by being what he laughingly called “the Invisible Man”.

Before we had an office, in fact, before we even had a foundation, all of AWA’s biggest ideas were drafted around their kitchen table. Bob and Jane’s Florence home has an American-style kitchen, so basically it’s the next best thing to Wonderland. Anything, except food, can happen in there. I was nearly always the one to rain on the parade. “You might not be bischero, but you’re certainly crazy,” I would often find myself saying. To which he would retort: “Let’s face it, if you’re not considered crazy at your own kitchen table, it means you’re not thinking hard enough”. To him, ‘Let’s sleep on it” meant waking up at daybreak with a dozen buzzing ideas. Here is what I mean:

“I think we should take on the façade Michelangelo designed for San Lorenzo. The 450th anniversary of his death is seven years from now,” Bob said. “If we start fund-raising tomorrow we might get it built in time.”

“Get it built?” I asked in disbelief.

“Yes, they have Michelangelo’s drawings at Casa Buonarroti. We could do it.” 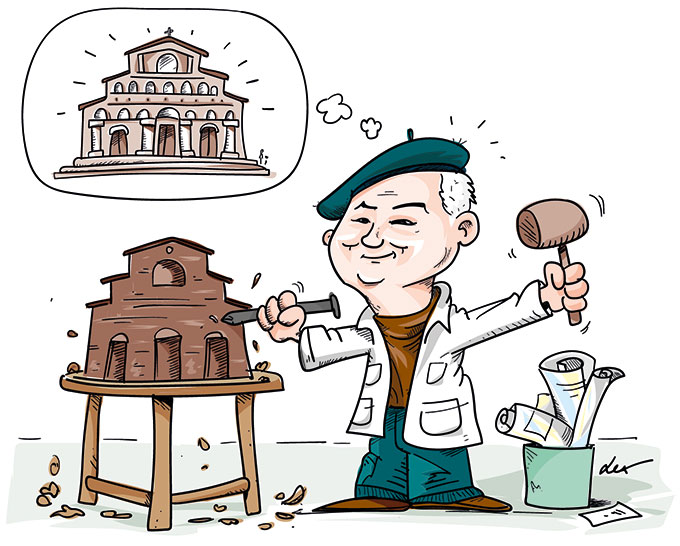 His question was an honest one and I struggled for an answer. “Well, because it would be new. The Florentines would hate it!”

“It should work out just fine then.” His eyes twinkled, but he was still serious. “There is nothing the Florentines like more than to be unhappy.”

You might agree with Bob about the façade or the Florentines, but either way I have a pressing need to record this “Michelangelo moment” here. It is my belief that those who come to Florence ultimately stay because of moments like that one. It goes far beyond the Stendhal syndrome. It’s that sudden, magnificent clarity that something “must be done” to the benefit of our city. And that—no matter how large or small the gesture—you are going to be the one making it.

Overcoming the challenges of real change is another matter, of course. And this is why the effort to implement “Michelangelo moments” can feel a lot like carving marble with your hands.  But therein lies Bob’s gift to the AWA: no matter the obstacle, he could always see the angel inside the uncut stone.

When Bob Hesse passed away this December, Florence lost one of its greatest lovers and I want the whole city to know. In Italy, grieving is a mostly private process, but my intent, here, is celebration. So, Bob, allow us to publicly revel in the unsung but tireless work you did for this city. And once we are through, let me personally acknowledge the decade you spent driving me to find “the story”. Today, Bob, as I say goodbye, that story is you.