The name “Latini” has long been synonymous with traditional Tuscan cooking in Florence. For more than a century, four generations of the Latini family have nurtured and championed the best of the region’s cuisine. In 2015, this long heritage was recognised when mayor Dario Nardella presented the city’s highest award, the Fiorino d’Oro, reserved for those who have “given prestige, in particular, to the city and its institutions” to Torello Latini, owner of the historic restaurant, Il Latini, founded by his father, Narciso Latini. 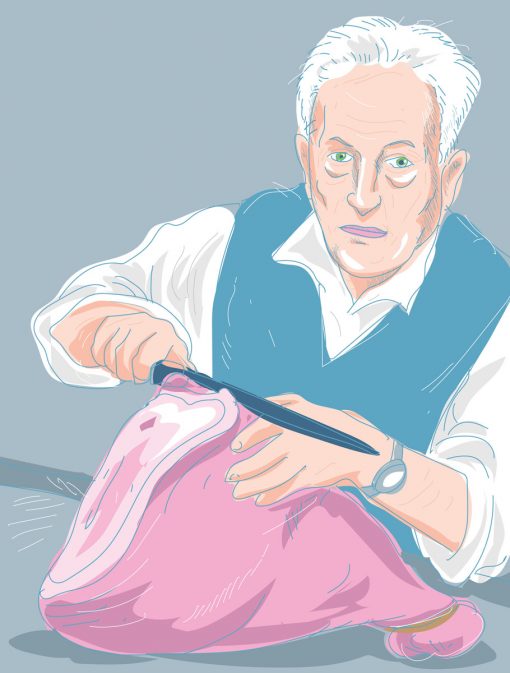 In 1945, on his return from fighting in the Second World War, Narciso Latini, who started out by working on a farming estate, married his sweetheart Maria and celebrated the birth of his son Giovanni. In 1949, he decided to try his luck in Florence by joining and eventually buying out his uncle who had a busy fiaschetteria (tavern) in via della Vigna Nuova, not far from Palazzo Rucellai. Because the fiaschetteria had no kitchen, Maria prepared hard-boiled eggs, cold cuts, pappa al pomodoro (tomato soup thickened with bread), ribollita (vegetable soup with bread and beans) and tripe at home so that Narciso could take them to his customers to savour with their wine whilst they played cards. Although their parents worked long hours, neither Giovanni nor Torello felt deprived of their care or presence in their lives. In fact, Giovanni who, with his American wife Carole, opened his own restaurant L’Osteria di Giovanni in via del Moro in 2004, gladly talked about his childhood when the family lived in via delle Caldaie. Reminiscing, he said, “I liked coming home from school and helping my mother prepare her dishes by peeling the vegetables she had bought at the market in Santo Spirito”.

By 1965, as the fiaschetteria became too small for its thriving business, Narciso with his wife and two sons decided to open Il Latini by moving to a bigger location in via dei Palchetti, with a kitchen and vast wine cellar in what had once been the Rucellai family stables. However, in November 1966, disaster unexpectedly struck the fledging restaurant when it was submerged in flood waters after the Arno burst its banks. With the help of family, friends and patrons, the restaurant prided itself for being able to open again within three days.

Narciso Latini was born on April 13, 1912 into a large extended family of tenant farmers in Certaldo, a town in the Val d’Elsa, famous as the birthplace of writer and poet Giovanni Boccaccio (1313–75). Like many men of his epoch, he told his sons he had been “robbed” of his youth. Firstly, at age 18, he had been obliged to do 18 months of compulsory military service. He was then called up to fight in the army during the war in Abyssinia (1935–36), which led to five years of Italian occupation of the country. This was followed, during the Second World War, by a period in Albania after Italy invaded (April 7–12, 1939) and occupied it (until 1943) as part of Mussolini’s empire building. More hazardous still, in December 1942, on his way to Libya where Italians forces were fighting, the ship on which he sailed was torpedoed by the Allies before it could reach its destination. In excess of 800 people on board died and only 20 to 30 people survived. Narciso was one of them, although he spent more than 15 hours in the water before he was rescued. According to his family, he rarely spoke of his days as a soldier or of this trauma, preferring to concentrate all his energy on the future.

Describing their father, Torello told me that, true to his upbringing, he was an authoritative man, but that both he and his brother loved and respected him. “He certainly wasn’t tall and he certainly wasn’t handsome,” he explained, “but he was very charismatic. He had a great personality. Although he had only completed the third grade, he was able to interact with people of all levels as their equal and they had great consideration for him.” Giovanni added that, “he believed in—and enjoyed the company of—young people, like the ‘Mud Angels’ whom he always welcomed and gave discounts to. So when they were older and had become successful they never failed to come back to visit him if they were in town.”

In 1982, Narciso established the Premio Latini, an annual prize for writers, poets and journalists “who have contributed to the greatness of contemporary literature.” At the celebratory banquet recipients, who have included Indro Montanelli, Giovanni Spadolini, Leonardo Sciascia and Enrico Mentana, are presented with a whole ham, like the ones that characteristically hang from the beams in his restaurant.

Despite being widowed for many years and at an advanced age, Narciso Latini never really retired. He spent his days between his sons’ two restaurants and at his farm in the country. He died peacefully on January 26, 2008 at 96 years old, certain his legacy would continue. After his funeral at the church of Santa Trinita, in via Tornabuoni, he was buried at the cemetery of the Misericordia, in Certaldo.