Christmas with the family…and Easter too

A well-known Italian proverb clearly states “Natale con i tuoi, Pasqua con chi vuoi,” meaning that you should spend Christmas with your folks while you can choose whoever you want to be with for Easter. This simple yet eloquent expression of popular wisdom must have been invented by a fool since it is every Italian mother’s nightmare, mine in particular.

Easter is one of the biggest holidays on the Italian calendar, a spring version of its “most famous cousin that everybody loves”, Christmas. It announces the arrival of warmer days with colourful displays of chocolate eggs in shop windows, cute bunnies and toys everywhere. Each region has its piatti tipici, including eggs every which way, artichokes, roast lamb, chicken, a special dove-shaped sweet bready cake called “colomba” and chocolate eggs, which are always hollow and have a special surprise tucked inside. I was born and raised in the south of Italy, in a small town close to Caserta, and our Easter food tradition includes two delicious delicacies, pastiera and casiatello. One is a cake made from ricotta and cooked grain, while the other is a special sort of bread stuffed with meat and eggs. Every human being, sinner or saint, deserves to taste them at least once in a lifetime. 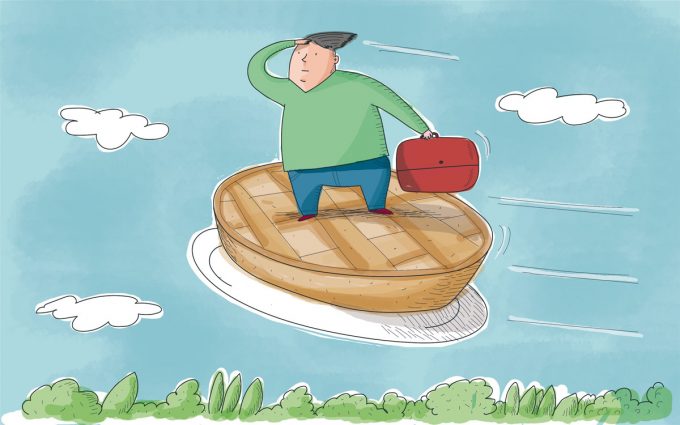 In Italy, Easter is so important that all 20-somethings who live up north are expected to return home for the religious celebrations and to sit at the table with 20 or more relatives that only show up for festivities. So, what’s the point of including Italian Easter traditions and a proverb in the same article. Well, you probably don’t have a mom who uses them against you.

The other day I called home to say, tentatively, that perhaps I wouldn’t make it back for Easter this year because of work and university. My mother’s reply: “I don’t want to hear about that at 9pm, Vincenzo. Let’s talk about it tomorrow morning.” My mom never calls me by my full name, for her I’m just Vince or “amore mio” (moms, right?), so I knew that something was wrong. After tossing and turning all night, she called me back at noon the next day and wasted no time in getting down to the gritty nitty.

“I thought about that Easter thing and let me tell you this, I will pay for the tickets, but you have to come home. I will not accept Easter without you.”

Things started to get testy.

“Don’t you even dare to say that. I refuse to make pastiera or casatiello if you’re not there to eat them. Don’t do this to me.”

Yes, my southern mamma actually resorted to using food as a weapon. In the background I could hear my father screaming in horror at the thought of Pasqua without pastiera. Thirty minutes later, plus a promise that I would try to take a few days off, we hung up. Days passed and everything went back to normal.

“She’ll be fine,” I thought. “My sister and her boyfriend are going, they won’t miss me too much.” Then my mother called. “Ciao, amore mio. Dad just booked trains and hotels. We’re all coming to Florence and I’m bringing casatiello e pastiera! Are you happy, a mamma?”

I guess this year will be “Christmas with the family… and Easter too”.