Elba Island can be what you want: a romantic getaway, a family gathering or a personal vacation da solo.

As my boyfriend and I strolled along a seafront promenade on Elba Island, passing colorful Tuscan buildings, we found a hole-in-the-wall bar for aperitivo. A chalkboard hanging on the door read speciale di ostriche, which my other half promptly ordered for us. My Italian is elementary and his English is intermediate, so there are times when we always don’t understand each other. I thought we were eating ostrich; he was puzzled. I showed him an ostrich on my iPhone; he laughed. We were eating oysters.

Elba Island is an hour’s ferry ride off the west coast of Italy, sandwiched between Tuscany and Corsica. Given its location, Elba has an exotic blend of Mediterranean cultures: Etruscan, Greek, Roman, Spanish, French and Italian. It is best known as the place where Napoleon was exiled in 1814. But a more appealing history is the legend that Elba Island was formed when seven jewels fell from Aphrodite’s necklace into the Mediterranean Sea, creating the Tuscan Archipelago. The centerpiece of the necklace, an exotic jewel, became Elba Island.

Last August, we spent four nights at Hotel Yacht Club (www.hotelyachtclub.it), a small yet charming boutique hotel in Marciana Marina, also called “Little Marseille”. It was a great deal, considering the location and that it was August: within walking proximity to restaurants, shops and the beach, plus a gourmet breakfast and the loveliest hotel staff, all for only 125 euro a night.

Elba Island can be expensive, especially in the high tourist season when most Italians and other Europeans head to the beach. If spending money is not an issue, you can rent motorboats and sailboats, learn how to scuba dive and eat at five-star restaurants. But if you are on a tight budget, there are still plenty of delights to experience, like the miles of hiking trails with soul-soothing seascape views, window shopping in one of the many towns and topping up your tan on one of free beautiful beaches.

Early in our weeklong stay, we drove 40 minutes from Marciana Marina to a small, stretch of white sandy beach called Spiaggia di Cavoli, tucked into the base of a steep slope. The road there was frightful, full of hairpin turns carved into undulating seaside cliffs, reminiscent of the Amalfi Coast or Monaco.

The beach was packed with people of all ages, whose bronze bodies glistened in the baking Tuscan summer sun. My boyfriend and I were conspicuous outsiders—pasty white from having spent the entire summer working in restaurants. As we waded into the water, naked children splashed past us, calling out in German and French. The water was so clear I could see every detail of my submerged feet.

To escape the crowds, we took our inflatable raft, purchased at a beach shop on the way, and spent hours floating in the calm waters. Three hundred feet from the shore, we remained cocooned in the safety of the cove, devoid of waves and wind.

Once back at the hotel, the concierge recommended Ristorante Pizzeria Bastia, in Colle D’Orano. Through the mountains on the other side of the island, the restaurant was easy to find thanks to the one main road that connects all the towns. When we arrived, we pulled onto the curb and hoped no one would side swipe the car.

It was eerily quiet. No music, no laughter, no cars zooming by, strange but peaceful, only a scattering of diners were at the tables. The restaurant felt like a secret. Seated on the terrace, with the distant sun setting behind Corsica, we began our feast with a platter of bruschetta, then spaghetti allo scoglio and fritto misto to share. The Elban wine wasn’t bad either.

The next day, we took a yellow rickety cable car to the top of Monte Capanne. In awe of the island’s exotic landscape with its uneven ridges, steep slopes and breathless views of the Tuscan Archipelago, tired and red-faced hikers informed us it had taken them six hours to reach the summit. My boyfriend and I felt a tad guilty about motoring up the mountain, nonetheless we managed to enjoy a panino at the cliff-side café and eased into a lovely afternoon, without breaking a sweat.

Elba Island can be what you want: a romantic getaway, a family gathering or a personal vacation da solo. Our hope is to visit the island again in the off-season and try other activities like wine tasting, visiting Napoleon’s villa and scuba diving through the exotic sea beds, and hopefully find an empty beach, too. 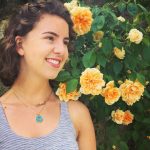 Olivia L. Eckerson is an aspiring writer and a student at Northeastern University in Boston, MA. She travels back and forth to Florence for great wine, fresh gnocchi and pistachio gelato. Soon, she would like to make that move permanent. Follow her on Instagram: @ecko578