Kevin Bacon is less relevant than he used to be. It might be time to start playing “Six Degrees of Janine Gaëlle Dieudji” instead.

Known to many as the former assistant to artist Clet Abraham, Janine is a born connector who’s built a career out of putting people in touch: she’s an art and film world facilitateur and neighborhood fixture in San Niccolò. All credit belongs to Florence, she says, for setting her on that path. 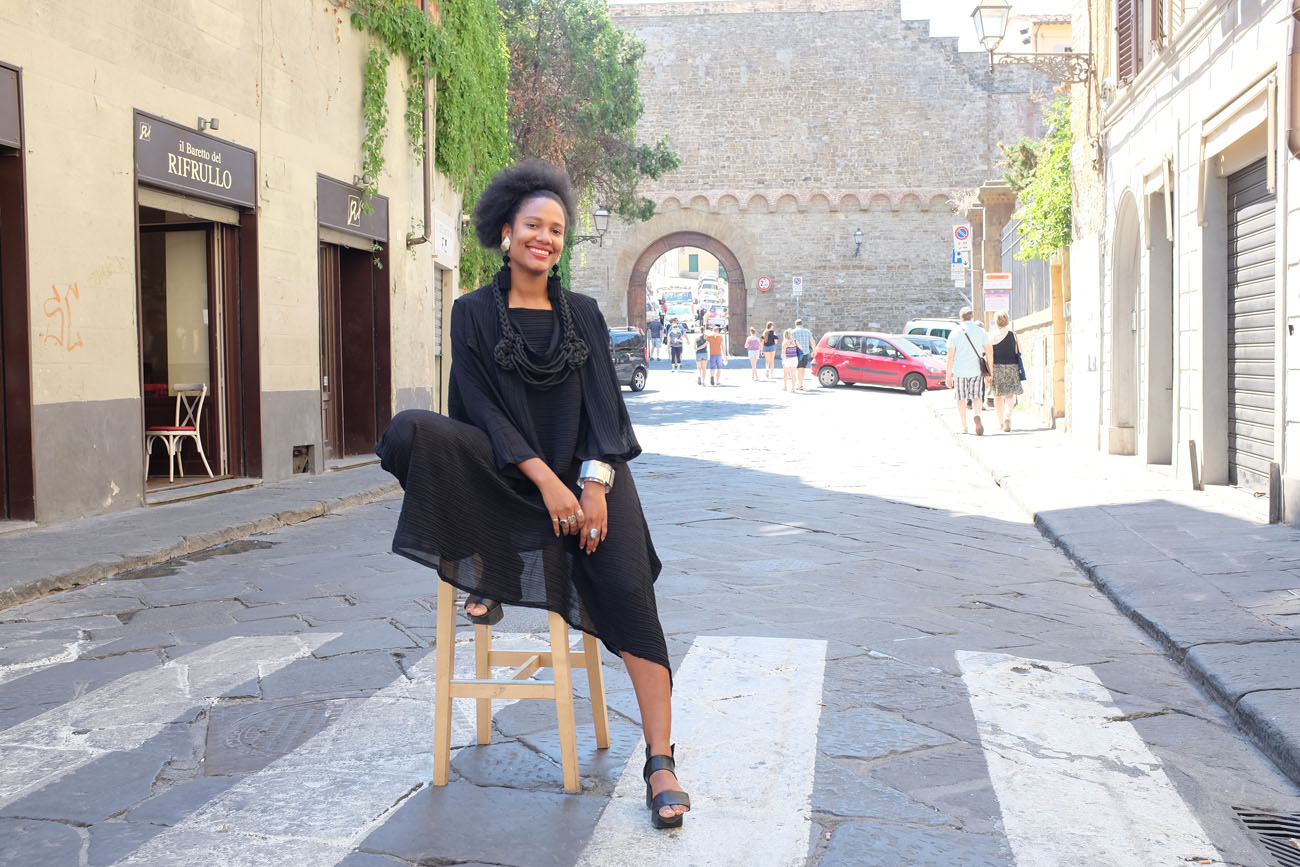 “Multilocal” is Janine’s background, home base and Instagram bio: French-Cameroonian but resident in Florence, she grimaces self-effacingly when asked how she first arrived here. “For Erasmus,” she says, “which I know is so common.” An Italian instructor in her high school was the driving force behind that decision: energized by her classes, Janine promised herself she would someday speak the language properly.

After her Erasmus chapter—a time in her life that was textbook “Florence for the first time, all butterflies and beauty”—Janine went back to Paris to work on her master’s degree in political science at Assas University, but found little to keep her there. Her sights (skewed by rose-colored glasses, she admits) were firmly set on Florence.

Putting her studies on hold, Janine returned for an undefined period, but uneasy realities of non-university life in Florence quickly sank in. “In my dreams,” she laughs, “I would come here, speak French, and go straight to work at the French Institute…because that’s how life works, right? I thought the red carpet would be rolled out for me!”

Visions of a steady, full-time, French-centric job soon fizzled, but Janine was tenacious, and the institute took note. Higher-ups put her in touch with the organizers of France Odeon, the French film festival and customary opener of the annual 50 Days of International Cinema in Florence. That was six years ago, and Janine is now an integral member of the promotional team. “Wherever I am, I always aim to get back to Florence for France Odeon work,” she says. Spoken like a true “multilocal”. 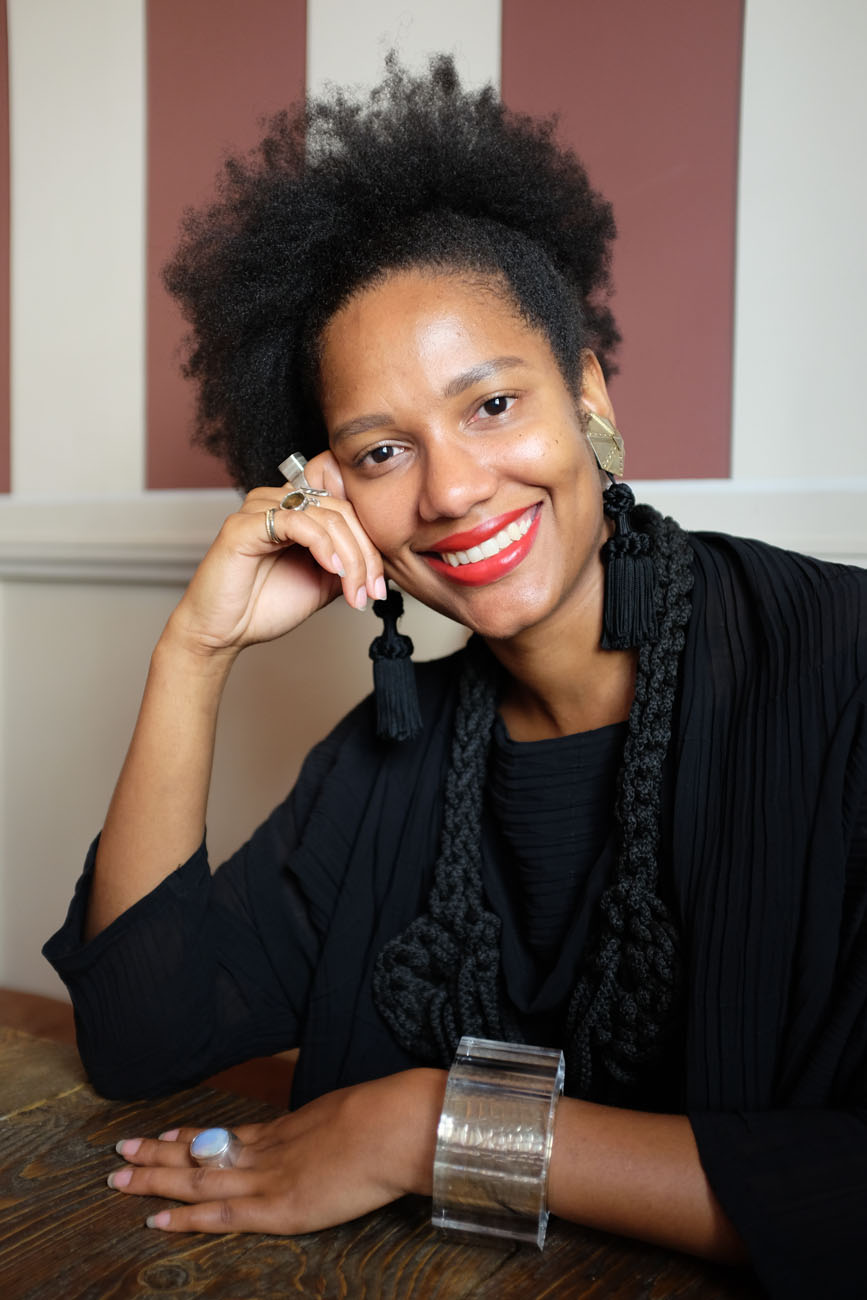 Given the short-term, seasonal nature of the job, Janine’s stay-or-go shuffle began. Retail work in a boutique paid (most of) the bills, but her niche remained elusive: “I was bitter and unfulfilled, and told myself I could no longer stay here just for the ‘glitter’.” Going on to graduate school at Lyon 3 University seemed like the most viable path to take, but a few weeks before her scheduled departure, Janine met fellow French national and famed street artist Clet Abraham, and they quickly became friends.

She stuck to her plan and moved to Lyon, but it was not long before France Odeon duties brought her back to Florence temporarily. Over a catchup aperitivo with Clet, the artist mentioned his hunt for a right-hand person—someone to communicate with dealers, collectors and press, price and sell artwork, and welcome visitors to his San Niccolò studio. Janine cursed the timing: intent on finishing her studies, she told him to call her if the opportunity were still available in six months. Clet then rolled out the red carpet that had evaded her a year before: waiting was no problem, he said. The job would be hers.

The pair began a three-year working partnership that taught Janine the ins and outs of the art world, her own projects eventually taking priority. “I realized I know so many people, and sometimes when you’re sharing {artistic} ideas with others, and they’re saying, ‘I want to do this, I want to do that,’ but are missing a piece of the puzzle, well, I saw that I could help. I put people in touch with each other, sell artwork, do auctions, organize performances,” she says.

Her toes are in plenty of pools around Florence and abroad: “I’m like a Swiss army knife: I try to do as many things as I can! But I also try to do things that I like. I don’t want people to decide for me anymore.”

Recently, that meant collaborating with new media artist Justin Randolph Thompson on the second edition of Black History Month Florence, held in February. Through her professional connections in contemporary African art—a term Janine loathes, but begrudgingly uses “as a shortcut”—she brought Togo-born, France-based artist Clay Apenouvon to town for an installation, a key event on the program.

Blackness is a defining element of Janine’s experience, particularly as an expat—a loaded word that still makes this author tense up a little. Her wariness of being exoticized was, in part, what led her to work with Griot, a webzine led by Johanne Affricot, a Rome-born woman with Ghanaian, Haitian and American roots. Named after the French term for a West African storyteller, Griot is an arts and culture publication aimed at spotlighting underrepresented perspectives and showcasing aesthetic, cultural and creative diversity. Its associated docu-series, The Expats, chronicles the lives of black Italians in search of new opportunities outside the Boot. Janine wrote for Griot over the past year before moving on to something we Africans got, a print arts publication, which just released its inaugural issue.

Years of blunt badgering about her background have led her to respond to every “where are you really from?” with “via San Niccolò”. That’s home for the time being, and it shapes her life like nowhere else, for anyone who’s asking: “Since living in Florence, I’ve met people who live or come from all over the world. It’s opened me up to so many new things, new travels,” she says. People digging for DNA details “are usually not interested in Cameroon, or in what I have to say about it. They are just hoping I’ll confirm an answer they’ve already created. But we’re in 2017, it’s kind of impossible to think that anyone is really from one place.” After a thoughtful pause, she adds: “Even the whole fiorentino DOC thing…come on. You’re not a cheese!”