Abramović: the artist who made a Hell’s Angel weep

The single constant presence in the work of Marina Abramović is the figure of the artist herself. For more than 40 years, her body has been exposed to an alarming range of shocks, challenges and hazards. “I test the limits of myself in order to transform myself,” she explains and at Palazzo Strozzi, in a show called The Cleaner, she sweeps through the memories of being burned, whipped and cut with blades, of sitting, bleeding or lying down in public performance for several hours on a block of ice. Her career has been a test of discipline and endurance for the artist and for the audience, too. Visitors emerge momentarily transformed—but, thankfully, intact. 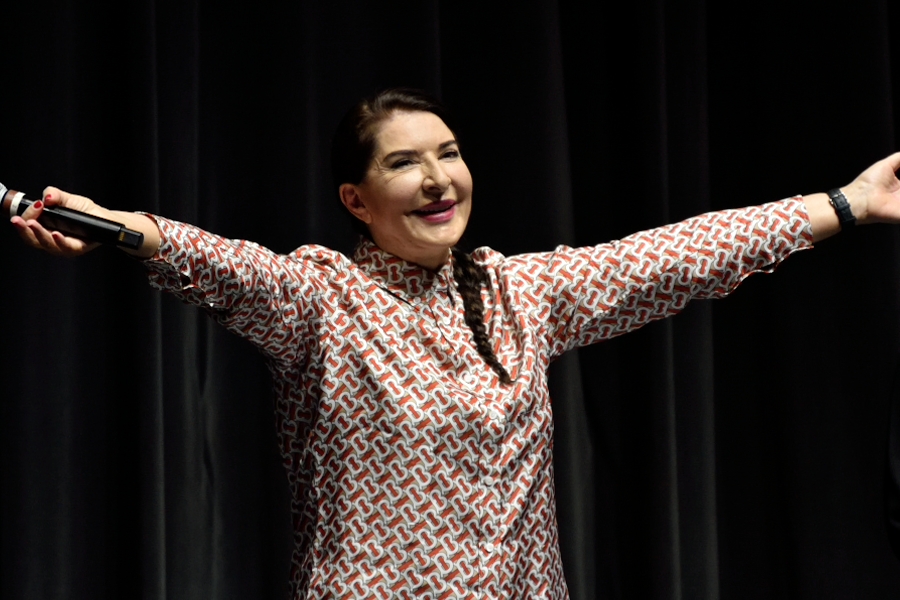 One of the final works in this retrospective is called Personal Archaeology (1997-2015). It consists of four oak chests-of-drawers filled by Abramović with memories of people, places and performances that have inspired her. In one drawer is a handwritten note to herself: “More and more of less and less”.

She has followed that advice. In her work, little actually happens but its effect goes on and on. In 2010 she emerged exhausted from her marathon performance at New York’s Museum of Modern Art, appropriately titled The Artist is Present. For almost three months, she sat motionless every day for seven hours and invited visitors to sit opposite her, silently, and return her stare.

Visitors poured in. They queued for their turn, which lasted as long as they could take it. One man went the full seven hours; people left queuing were angry until they realised that waiting was also part of the performance. Many reported on the intense emotional impact of the experience: the artist claimed that one Hell’s Angel was reduced to tears. Abramović never flinched, despite the physical and mental demands on her, and allowed herself no bathroom breaks.

The piece redefined the parameters of performance art and, in the process, became a huge cultural event. Abramović called it “a pared-down, long-durational piece that destroys the illusion of time”. Her work is a kind of vigil and, as in a vigil, the mind transcends the limitations of time. Her best work may have been made in the mid 1970s when each lasted merely an hour or so. They built on simple repetition – like shouting, slapping, breathing, standing, walking – and appeared to manipulate time to penetrate our own vulnerability.

One of these performances is called Relation in Space (1976). A naked man and woman are filmed as they repeatedly pass by each other. At first they walk slowly and when they touch in crossing, it appears accidental. Then the pace speeds up and the figures run at each other and collide intentionally.

During its 58-minute duration, the emotional level develops from soft encounter to aggressive impact. No word is spoken and no move is repeated. The performers had no rehearsal nor had planned an ending.

The film (and Abramović helped pioneer artists’ use of film) records a live event that took place at the Venice Biennale in July 1976. It involved Abramović and her partner Ulay (the German artist, Frank Uwe Laysiepen) in front of an audience of 300. The result is compelling; it is possible to watch the entire work without realising that time is draining away.

For while the actions are simple, the content has unlimited possibility—it implicates the viewer through the questions it raises and the feelings it projects. At one point Ulay prevents Abramović from falling after his body cannons into hers. He puts out a hand to protect her. Was that a gesture of compassion in spite of the atmosphere of mounting audacity and hostility? Or was it a ploy to keep the performance going?

In this and other work that pioneered performance as a legitimate medium within visual art, Abramović’s nude body quickly became the vehicle for ideas about passivity and danger, control and risk, even of complicity and empathy.

In the mid-70s she performed a piece, Lips of Thomas, named after a lover of hers. It involved her whipping herself, cutting a five-pointed star—a symbol of powerful influence in religion and politics—into her stomach with a razor blade, and then lying on a cross made of ice beneath a suspended heater for 30 minutes, bleeding all the while. In 1974 she had to be pulled unconscious from a performance in Belgrade. The burning star she was lying inside consumed all the oxygen and burned off her hair.

Abramović has often performed naked. She associates nudity with vulnerability, especially when inflicting pain on herself. It also represents throwing off the bonds of history (especially strong in art), place and even time. Although made in 1975, three filmed performances called “Freeing” that show the artist dancing to exhaustion, shouting until hoarse and sitting while saying words over and over, almost hypnotically, suffer from no notion of having become dated beyond relevance. 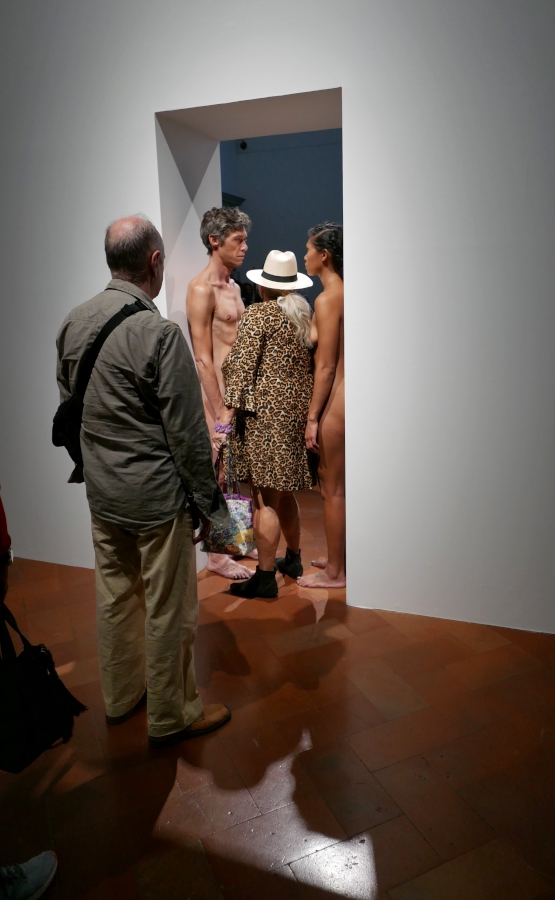 Abramović insists that her performances are gender-neutral. One body is like a machine: it performs actions and is subjected to them. Two performers together, moreover, unite into a single organism. The artist, who was raised in a Christian family in post-war Yugoslavia, carries a spiritual element into her work that is seldom paralleled elsewhere in contemporary art. The concepts of martyrdom, sacrifice and penance electrify her performances as well as the emotional memory of scriptural words and images.

In perhaps her most famous work with Ulay, the two stood opposite each other, unclothed, in the narrow doorway to their exhibition in Bologna in 1977. To enter, visitors to the opening had to pass between them. The police stopped the show: the authorities balked at this public display.

Forty years later, the complete, six-hour work is one of several recreated by younger performers at Palazzo Strozzi, proving that gender is an ever-changing state of affairs. Nonetheless, gender remains an unavoidable ingredient in the nature of the visitor’s response. A woman under the stress that this artist applies to herself inevitably solicits sadness, however suppressed.

Why does she put herself though such effort and suffering in the name of art? She says that she still feels pulled between orthodox religion and the communism her parents served. Dedication and discipline were common to both and these she has brought to her work.

But more importantly, it is about self-discovery, in which the artist is as much the channel for transformation in others as in herself. By testing her limits, she exposes her audience to similar scrutiny. In the early ‘70s in Naples, her performance Rhythm O involved her lying on the floor surrounded by 72 instruments, from lipstick and nails to a gun with a single bullet. She invited visitors to do what they wanted to her with these objects. One man held the gun to her head; another kept returning only to watch. The latter, she found the spookier.

How far will people go? A native of Belgrade, in 1997 she performed Balkan Baroque at the Venice Biennale. Weeping as she sang songs and told stories from her native country, she scrubbed clean 1,500 cow bones six hours a day for four days. She atoned for her complicity, and that of mankind, in her nation’s bloody civil wars.