This softly scented pink salami dates to the Middle Ages when Tuscany’s butchers decided to add fennel seeds, prevalent in the fields and meadows, as an alternative to more costly pepper.

Finocchiona became the apple of the eye at noble banquets and lowly taverns over the centuries. It’s said that Niccolò Machiavelli was such a fan of the fennel charcuterie that it was a permanent fixture at his dinner table. In 1875, the word finocchiona was mentioned in Rigutini and Fanfani’s Vocabolario della lingua parlata and in 1878 it was added to the Dizionario Pirro Giacchi. Even the 1889 edition of the Vocabolario degli Accademici della Crusca pays tribute to finocchiona, emphasizing its Tuscan origins. In more modern times, leading Italian publisher Treccani acknowledged finocchiona in 1956, listing it as a “typical Tuscan cured meat” in the Dizionario Enciclopedico Italiano.

An old Chianti adage claimed, “Just as hairdressers are capable of making even the ugliest women look attractive, the aroma of finocchiona is able to mask the flavour of even the most undrinkable wine” in reference to how Tuscan farmers used to cover the faults in their wine by upping the amount of fennel seeds and flowers in the cured meats they made. This way, even the roughest reds would taste better after a slice of bread and some finocchiona.

In Tuscany, pig farming took root in the Etruscan era. Pliny the Elder wrote that Etruria, as Tuscany, Lazio and Umbria were called in classical antiquity, would send 26,000 pigs to Rome every year for butchering. A vast park extended from the Maremma to the oak and chestnut forests between the Tiber and Arno rivers, where the pigs lived in idyllic conditions to provide flavourful sausages and salami.

What makes Finocchiona IGP unique is undoubtedly the fennel seeds and/or flowers that are added with pepper, salt and garlic to a blend of the finest pork, which is selected, checked, ground and worked according to traditional methods. Each producer hands down a secret recipe from one generation to the next that meets with the strict rules of the production guidelines. (The quantities of the ingredients may vary so that every Finocchiona IGP can be personalized.) Red wine can also be added to the mix up to a maximum of one litre for every 100 kilograms of sausage meat. Finocchiona IGP is left to refine for 15 days for salami weighing less than a kilogram or 45 days for up to 25 kilos, enabling the traditional aromas to be developed and the distinctive soft texture to be maintained.

The perfect pairing for Finocchiona IGP is Tuscan bread. The savouriness of the salami more than makes up for the lack of salt. Serve it as an appetizer with mature and young cheeses and pickled vegetables. But cooking with finocchiona also has a certain allure with recipes ranging from fresh egg tagliolini with Finocchiona IGP and artichoke puree to figs and Finocchiona IGP on toast with a drizzling of really good Tuscan olive oil, paired with a Tuscan craft beer or glass of local red wine. 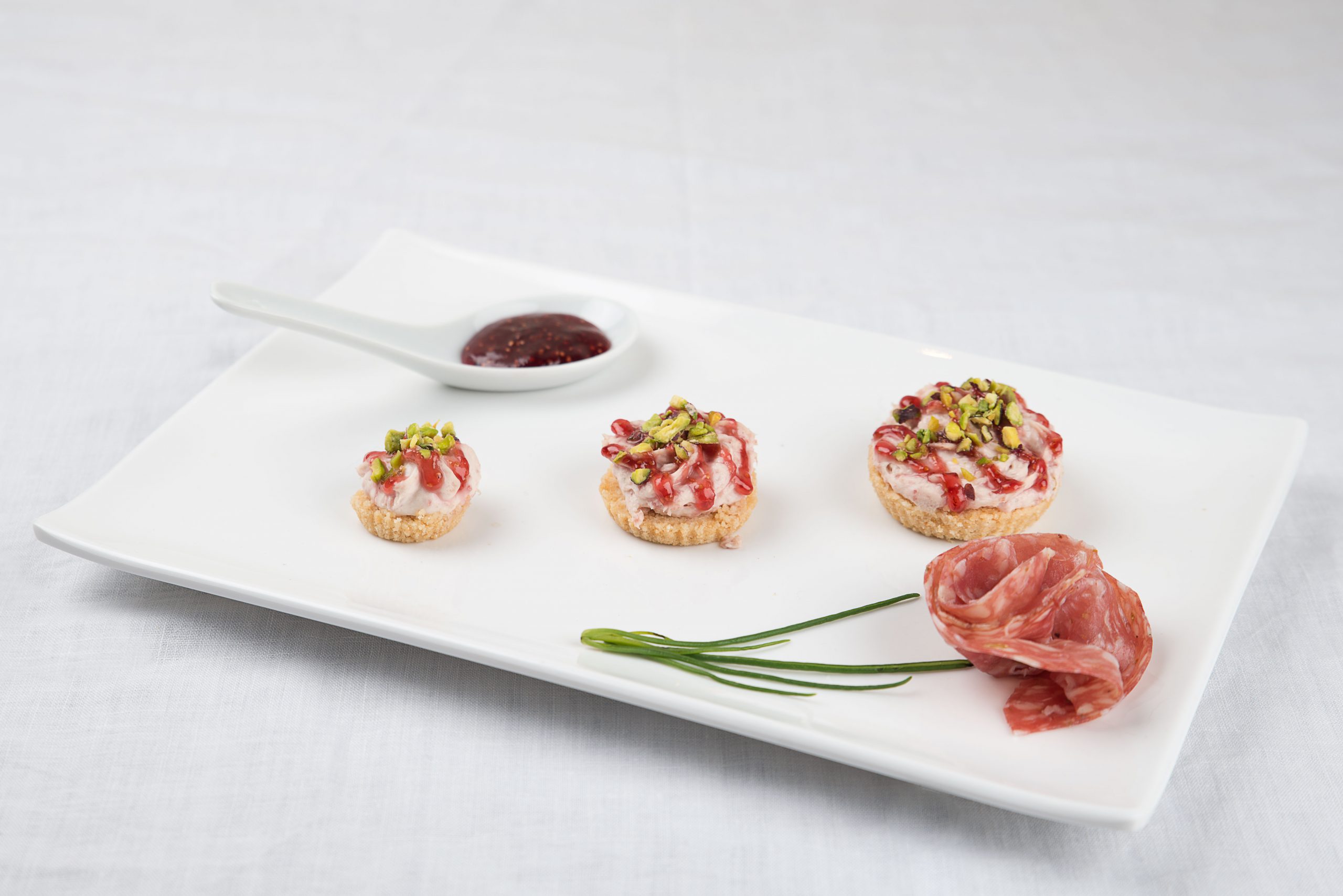 A delicious appetizer by chef Rossella Giulianelli from Chianciano Terme.

Reduce the crackers to breadcrumbs in a food processor and mix in the melted butter. Fill 12 ramekins one-third full and press down the base with the back of a teaspoon. Refrigerate for at least an hour. In the meantime, finely chop the Finocchiona IGP in the food processor and mix with the cheese to make a smooth paste. Spoon the mixture into a pastry bag and pipe the finocchiona cheese into the ramekins. Refrigerate for at least an hour. Garnish with the toasted pistachios and fig jam.

Finocchiona rolls with leeks and chickpeas 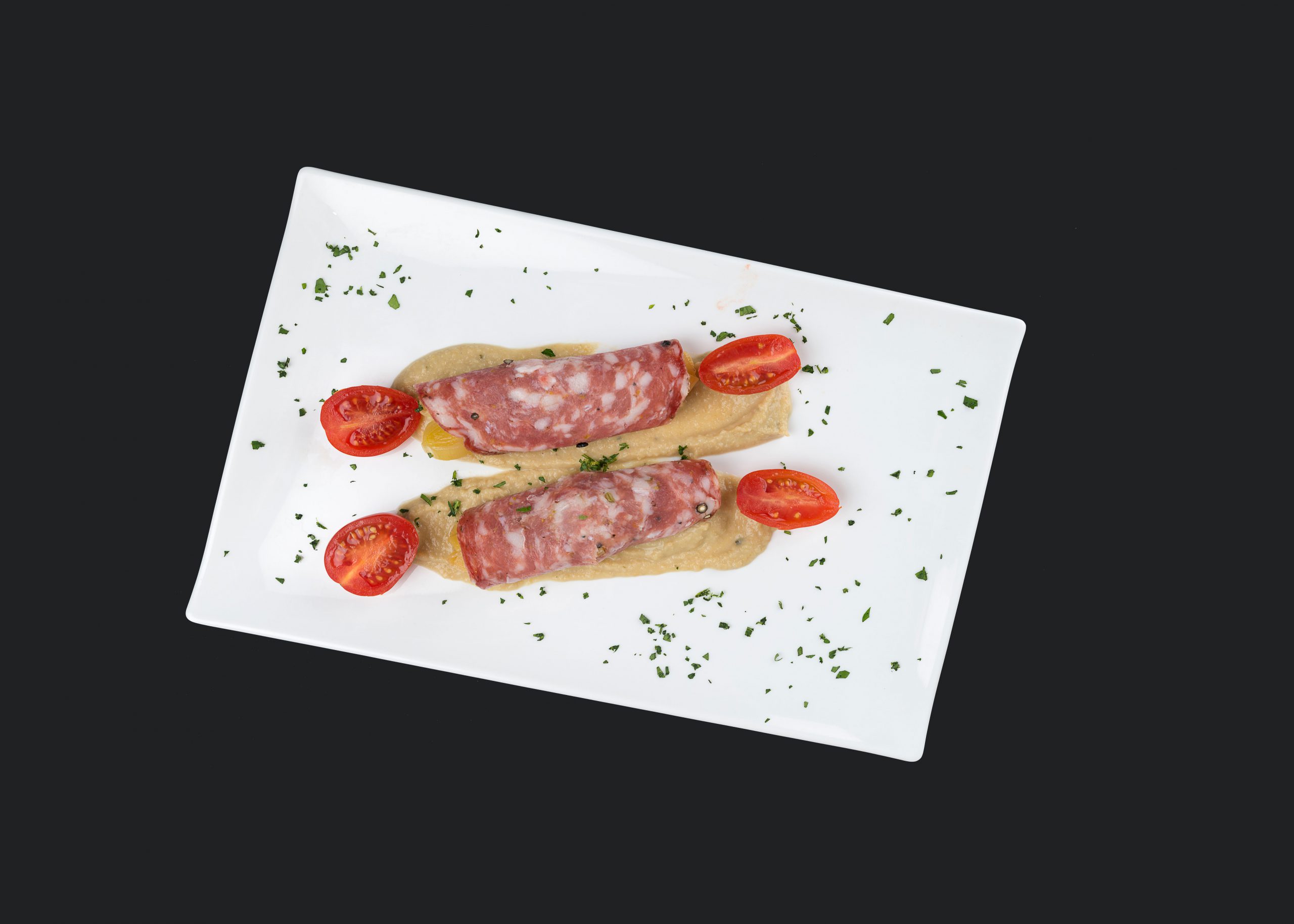 A quick and easy meat course by chef Anna Tuci.

Soak the chickpeas in water for 12 hours. Cook in a large pot of salted water until tender, about 1 hour. In the meantime, wash the leeks and slice them into thin wheels. Sauté the leeks in 3 tablespoons of olive oil in a heavy-bottomed pan over medium heat for 15 minutes. Season with the chilli pepper, salt and pepper. Remove from the heat and set aside to cool. Transfer the chickpeas to a food processor with a small amount of the cooking water. Sauté the garlic and rosemary in some oil in a saucepan until the garlic turns pale gold. Add the chickpea puree and season with salt and pepper. Cook for 1 minute over low heat. Spoon the puree into the slices of Finocchiona IGP and wrap.

In order to be Finocchiona IGP, every salami and packet must clearly state “Finocchiona”, followed by “Indicazione Geografica Protetta” or the acronym “I.G.P.”. The Finocchiona IGP Consortium was established in 2015 to protect and promote Finocchiona IGP, which now represents 44 member producers that export to 28 countries around the world.