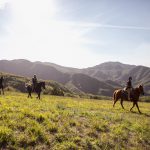 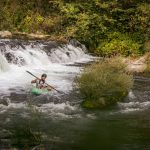 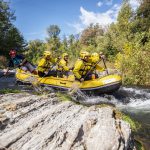 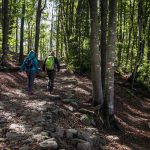 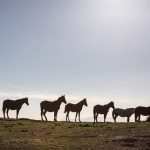 An absence of big cities and an abundance of green seems to generate a hush over the whole area of the Mugello, an area of Tuscany located northeast of Florence. You’ve probably heard about some of the towns: Barberino, now known for its outlet mall; Scarperia, famous for its artisan knives; Borgo San Lorenzo and Vicchio, home of arguably the best tortelli pasta in the world. This valley is bound by mountains to the north that lead to Emilia-Romagna and are crisscrossed by evocatively named hiking paths, like the via degli Dei and the via della Lana e della Seta, where mountain communities converge in towns like Marradi (famous for its superlative chestnuts) and Firenzuola (whose pietra serena mines contributed to the building of much of Tuscany). The mountains and rivers of the Mugello offer a natural playground for outdoor-sports enthusiasts who can trek, paddle, climb, bike or ride through the area.

The Florentine headed out with Tuscany Adventure Times to try as many activities as possible.

The Mugello is home to still and moving water, as we found out on a warm early fall morning. First up was white water rafting on the Sieve river, which originates in Montecuccoli in the municipality of Barberino del Mugello. We meet our guides Sebastian and Enrico not far from the highway exit, where the more cold-blooded of us don yellow dry-suits and get a quick lesson in how not to fall out of a raft. We’re told to paddle all the time, except when our guide tells us to stop and hit the deck. This comes in handy right away, as the excitement begins with a mini waterfall just minutes after boarding. Despite feeling slightly extreme, this activity, our guides reassure us, is appropriate for families with children. The rest of our voyage is smooth and silent, and we have time to admire the jungle-like flora and the fish, amphibians, reptiles and birds who make this transparent stream their home. 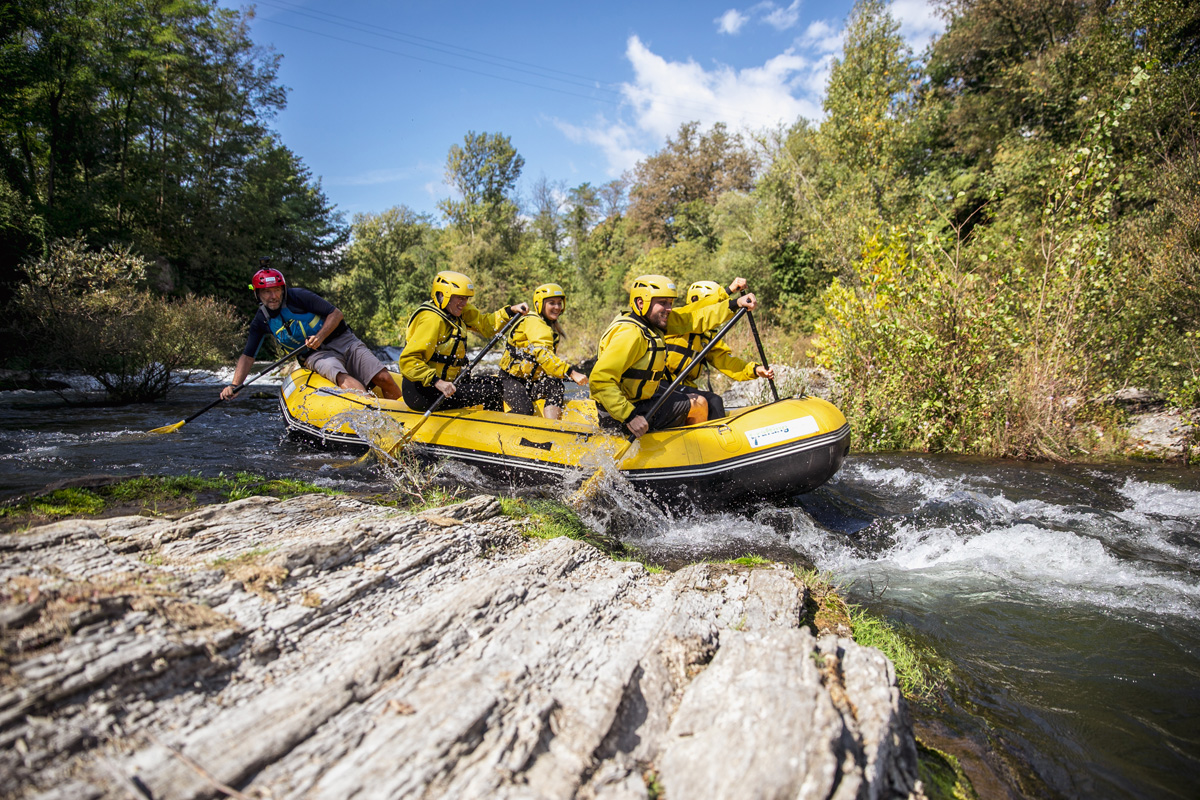 The Sieve is one of the main tributaries of the river Arno—in the past its extreme highs of October and November contributed to the flooding of Florence. Proper planning of hydraulic resources led to the creation of the Bilancino Lake, which controls the flow of the Sieve. The northeast side of this lake is a nature reserve, the Oasi del Gabbianello, an important stopover point for the migration of white storks, cranes, greylag gooses, nightingales and falcons. Bilancino also features an inland “beach” and watersports area, just a short drive from Florence and surrounded by green hills, which is where we’re headed. With its gentle winds, this man-made lake is a good spot to learn windsurfing and sailing. Taking off from the rocky shore, we try our hand (or feet) at the sport that requires the least skill: SUP, stand-up paddleboarding. With five square kilometres of surface to cover, one could develop abs of steel. The water is clear as a looking glass, reflecting the clouds, and the quiet, repetitive sound of paddling is deeply relaxing.

In the Tuscan-Emilian Apennines, two historic routes connect Bologna with Florence and Prato. The via degli Dei, from Bologna’s piazza Maggiore to Florence’s piazza della Signoria, was created by the Etruscans, paved by the Romans for their military usage and retraced through the Middle Ages as an essential route of trading and pilgrimage. Now the 130km long trail is a popular four- or five-day walk, with baggage service, hotels and traditional restaurants providing respite along the way. Those wishing to do just a section can find an interesting one in the Mugello: our group set out from the Futa Pass, not far from Firenzuola, entering dense woods of beech and fir that let through slivers of light. After a short uphill walk, the soft ground suddenly changed to large, smooth rocks as we found ourselves on the ancient Roman road known as the Flaminia Miltaris. The well-signposted route allowed for a few hours of hiking in complete peace, with only the sound of boots and birds, and the occasional intrepid five-day hiker, to keep us company. Fewer walkers take the route that we can translate as the “silk and wool hiking trail”. Linking Bologna and Prato across 130km and divided into six sections, these paths were well known in the Bronze Age and, like its more famous parallel route, used by Etruscans and Romans. It was recently reintroduced as a signposted trail thanks to a partnership among the local municipalities. This route is a journey into the ancient and more recent past of the two cities, connected by the textile industry: one comes across 11th-century waterway infrastructures, religious sanctuaries, nature reserves and WWII memorials. On the road between Mugello and Montepiano, we dip into this trail at the Parco Memoriale Linea Gotica in the municipality of Vernio, where Vito Paticchia, author of the official trail guidebook, points out the memorial placed at the site of a battle on the Gothic Line between German and US troops. The view helps us understand why the spot was strategic: we can see the whole Mugello valley below, the late afternoon sun glinting off Bilancino Lake.

Following the trail further down (or driving, in our case), hikers reach the Calvana natural reserve, where the limestone massif takes on unusually undulant shapes. These verdant hills provide vast 360-degree views over the Mugello on one side and Prato’s Bisenzio Valley on the other. But most of all, they are home to a pack of wild horses belonging to the Calvana breed. With the wind whipping at our hair, we silently observe the majestic creatures from afar before heading down into the valley. A deer jumps out in front of us and we scramble for our cameras: memories of this trip will be not only through our photos but always in our souls.

Fall events in the Mugello 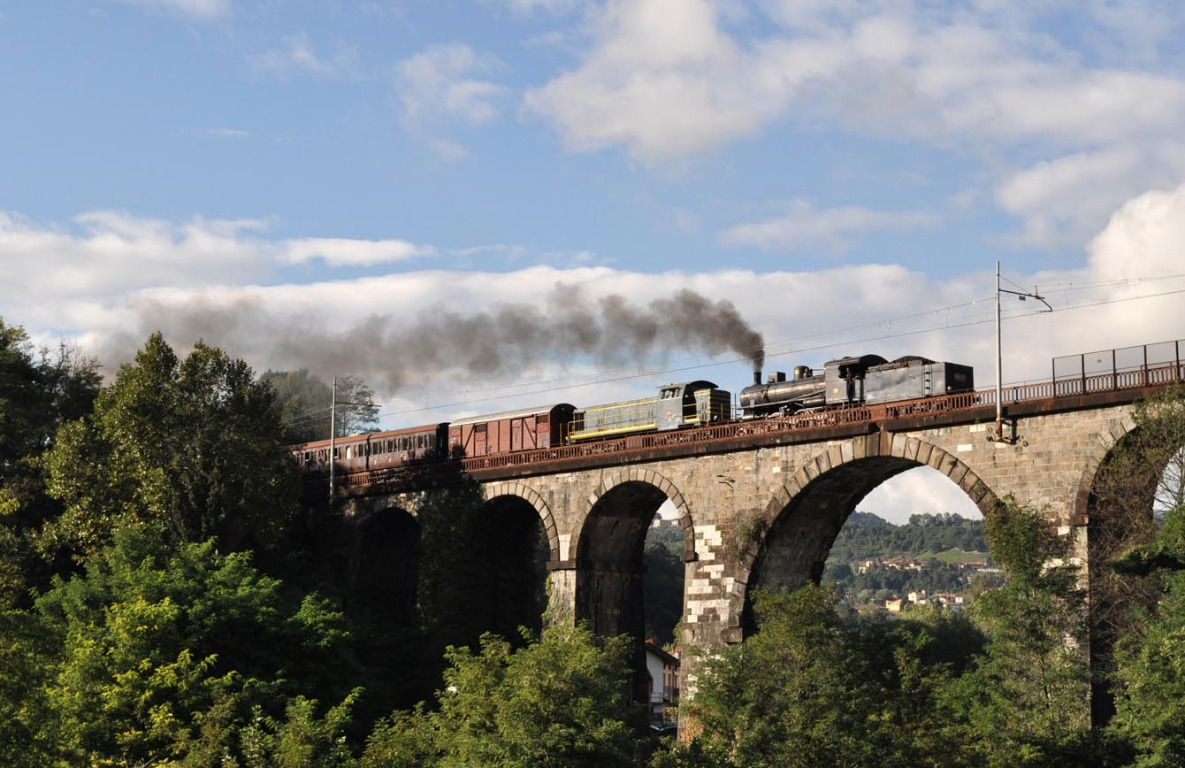 Marradi’s Sagra delle castagne e del marron buono takes place every Sunday in October. Considered one of the top chestnut festivals in Italy, this annual fair means fall has begun. Taste chestnuts in all forms as well as cold-weather fare like polenta and wild boar. The Faentina train line is the best way to get there: you can take the historic steam train there on October 20 and 27 (www.ferrovieturistiche.it).

For more information about the Mugello, see www.mugellotoscana.it 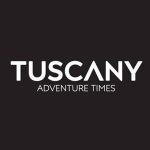 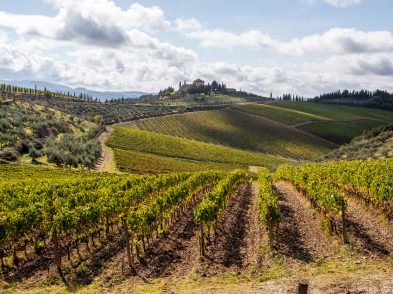 Coastal cycling from Bolgheri to Baratti

The sea breeze rustles the pink and white rhododendrons as we mount our e-bikes to explore the Etruscan Coast. Our point of departure is where the viale dei Cipressi meets ...