I’ve been keeping a secret for three years. In April 2016, I started to document the conservation process of the magnificent South Door of the Florence Baptistery. The embargo was lifted on December 6, 2019, when the 14th-century portal crafted by Florentine artist Andrea Pisano returned, restored, to public view.

The Opera del Duomo Museum has completed the arduous task of restoring all three original bronze doors originally created for the Baptistery of San Giovanni in piazza Duomo. Fine replicas can be seen on the octagonal building today and are better placed to bear the brunt of the elements (heavy rain in the autumn and ardent heat in the summer) as well as the acid rain and smog that tarnished the original works, which now enjoy the secure shelter of the well-appointed museum.

Deep inside the Opificio delle Pietre Dure (the organization that oversaw the conservation of the three sets of doors over 35 years), I documented the entire process from the moment the doors were painstakingly removed from the Baptistery through to being placed in their new home in the museum. It’s hard to imagine anything predating the cupola in Florence, but these doors were actually a fixture on the Baptistery prior to the construction of Brunelleschi’s Dome and before Lorenzo Ghiberti heated and poured his first bronze sculptures to create the North Door and the famous East Door, dubbed by Michelangelo as the Gates of Paradise when he first saw them.

The historical significance of the work cannot be overlooked as the doors use a long lost and dangerous technique of fusing the gold to the bronze using mercury, which has been abolished as it can produce deadly results for the artisans. The technique and workmanship from the early 1300s would lay the basis for generations of Florentine artisans, who learn bronze sculpture techniques to this day. The formella named Visitation, for instance, would later seem to form the basis for Pontormo’s paintings.

Filled with awe on so many levels, I watched as the door began its journey from a deep green mold- and grime-covered work to the polished gold and dark brown bronze that it is today in the museum. First came the process required to move the door, which weigh in at a total of 6,500 kilograms per side. An enormous crew had to transport the portal from the Baptistery to the restoration location and eventually place them perfectly behind glass in the museum.

The amount of detail and step-by-step care that went into this conservation, which cost 1.5 million euro is an unparalleled study on how to conserve precious works of art and how not to destroy them in the process. Countless testing and retesting is conducted prior to moving on to the next step in the process. Florentine pride in their heritage is manifest as each person who came into contact with the work, myself included, experienced and appreciated the work, while proceeding with utmost care to preserve every detail. My job was to document each phase from various points of view.

As a documentary filmmaker, this was pure documentary process as I understood that each phase was going into an archive for future generations to be able to study and appreciate. Many of these techniques have been lost over time and to know that a filmed archive of the process now exists is profoundly rewarding. The footage will be added to the Opera del Duomo archive and can be used by scholars, artists, art conservators, archivists and news organizations in the future as a detailed testament of how the process unfolded.

The doors are part of the permanent collection of the Opera del Duomo Museum and can be viewed for the cost of a regular ticket. 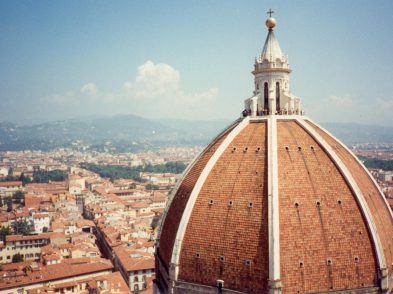