Back in May 2016, I wrote an article for this newspaper about the restoration of Pietro Lorenzetti’s Arezzo altarpiece from 1320 by RICERCA Restauro, a group of three women who have been working together for the past thirty years. At the time, only one company had made a donation to their efforts. Now, four and a half years later, they have completed the restoration and the altarpiece has been returned to the Pieve di S. Maria. Thanks to donations from readers like you, they managed to raise the 300,000 euro that this immense task cost.

I talked to Lella Droandi, the spokesperson for RICERCA about this huge undertaking. 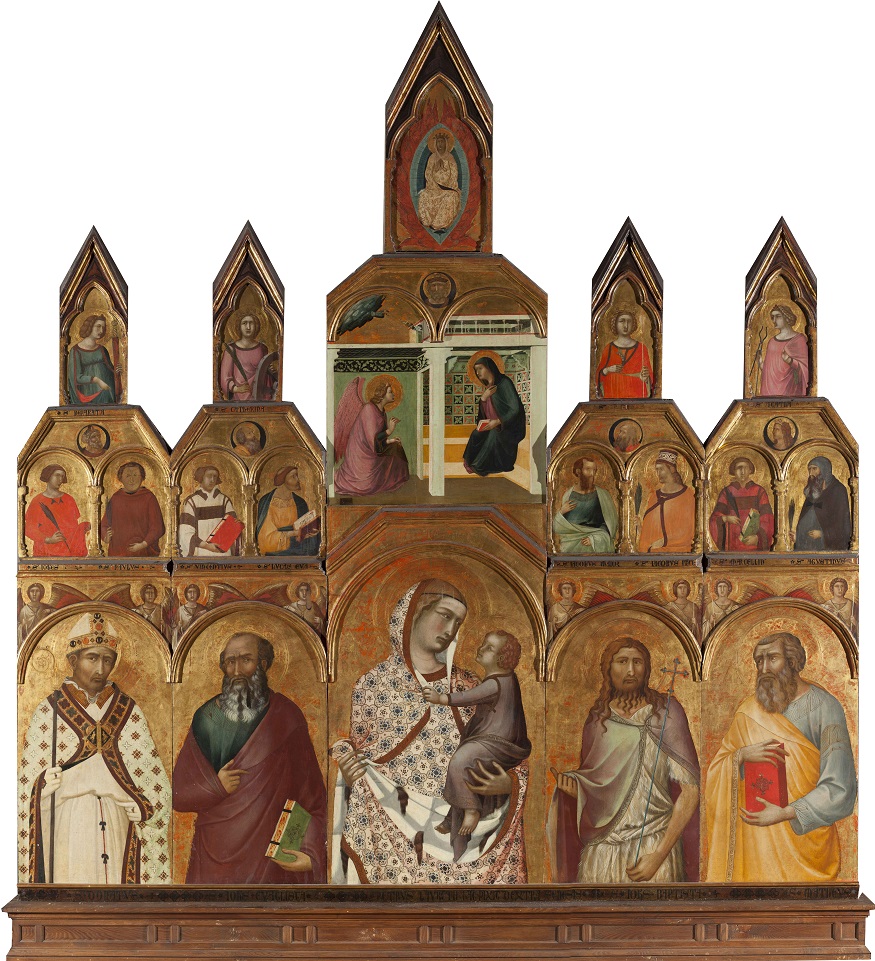 Oonagh Stransky: How long did the restoration project take from start to finish?

Lella Droandi: We received the artwork from the church in September 2014 and returned it on November 8, 2020. Initially, we planned on returning it in April 2020 and even scheduled an inauguration for April 17—exactly 700 years after the initial contract was signed by Pietro Lorenzetti and Bishop Guido Tarlati—but due to the Covid-19 lockdown, we had to delay it until this past November.

OS: What discoveries did you make while working on the altarpiece?

LD: We were constantly amazed by the excellent pictorial quality of the work, both in terms of the precious colors and materials that were used (as stipulated in the contract) and with regards to the painting technique itself. The overlapping strokes bring life to the iridescent shapes in a truly modern way, carefully shaping each of the figures in their spaces.

Equally amazing are the freehand engravings done in the areas covered with gold leaf. After we cleaned out the dirt that had accumulated inside them, their gleam returned; they glow in the light. Now you can see the rich details of the cope and miter of the patron saint of Arezzo, San Donato, true masterpieces of goldsmithing within the painting.

Detail: Prophet Daniel before and after restoration

Also, the horticultural designs on the books in the hands of the saints indicate the importance of the volumes depicted. Unlike the Polyptych of Pisa by Simone Martini, done around the same time (1319), Lorenzetti doesn’t use rely on the lozenge shape: only on the buttons of the two holy martyrs’ robes.

OS: What kinds of feelings did you have when the altarpiece was returned to the church after six years in your studio?

LD: Completing this project was deeply gratifying and was its own reward after years of slow, patient, difficult work. Seeing this precious work back in its place, shining down on the central nave, was deeply emotional for the three of us. The event was celebrated with a papal mass officiated by Archbishop Fontana and accompanied by the Corale Coradini. Due to Covid-19, that was the only kind of celebration that we could have.

At the start of the mass, the altarpiece was hidden behind a bronze taffeta curtain. The moment the curtain was opened was very dramatic! Seeing the masterpiece back in its place confirmed the quality of our restoration work. 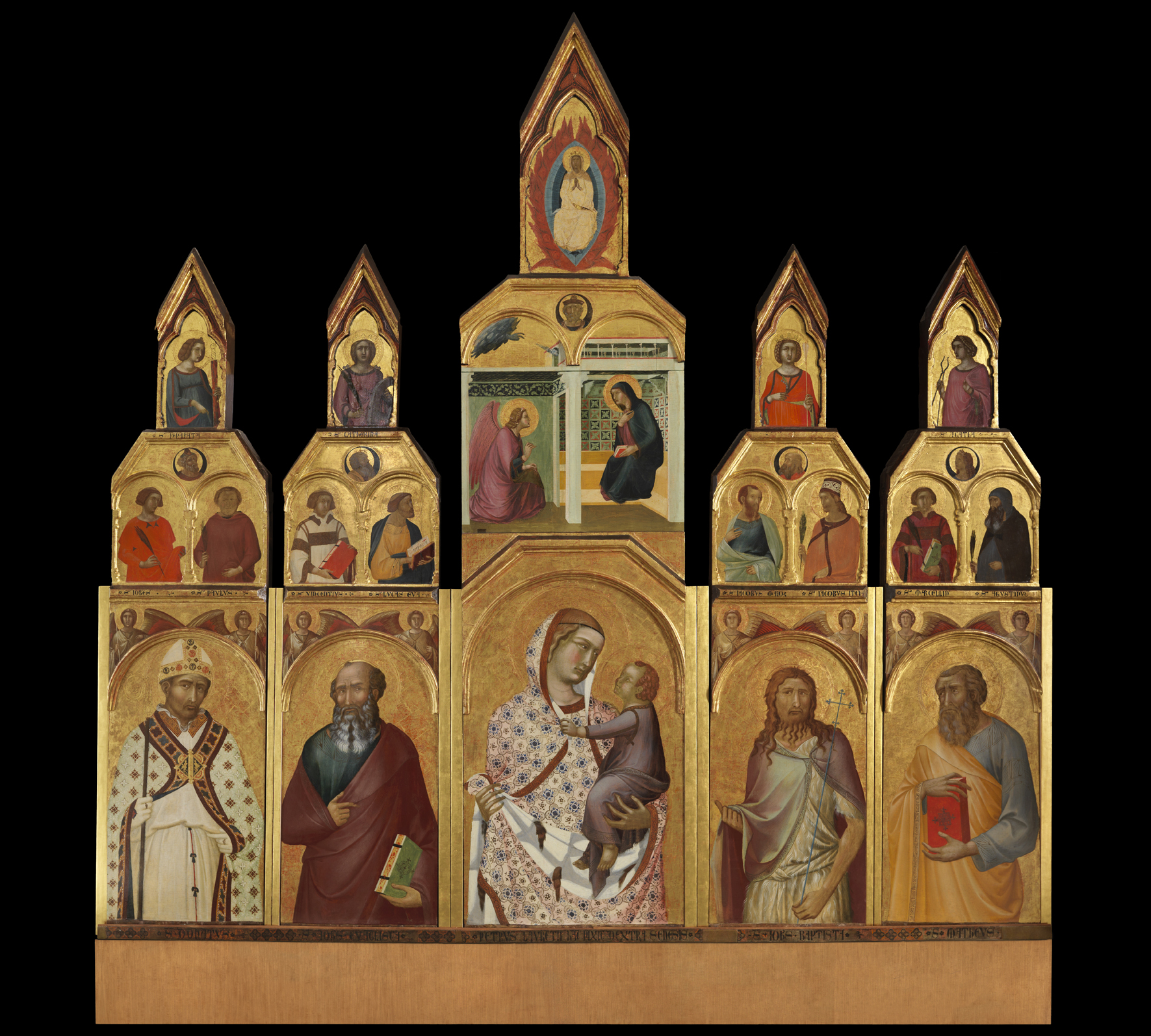 OS: The Church gave you permission to renovate the masterpiece but neither it nor the State offered any funding for this immense task. How much money did the undertaking cost?

LD: We received 100 per cent of the amount needed for the restoration, which came to 302,000 euro, in donations. The non-profit organization Art Angels of Arezzo was a major help to us.

OS: How did AAA help exactly?

LD: Art Angels of Arezzo is a non-profit organization that focuses on raising funds to support the preservation and conservation of the artistic heritage in Arezzo and surrounding areas. The first project they took on in 2017 was the restoration of the Lorenzetti altarpiece. Vice president of the association, Pam Walter, was key in raising money in the United States, and hosted an important event for us in New York City, which was attended by Stephan Wolohojian, Curator for European Painting at the Metropolitan Museum.

Another association that was enormously helpful to us was Friends of Florence, led by Simonetta Brandolini d’Adda. Thanks to their non-profit status in the USA, they were able to accept tax-deductible funds from American donors on our behalf. 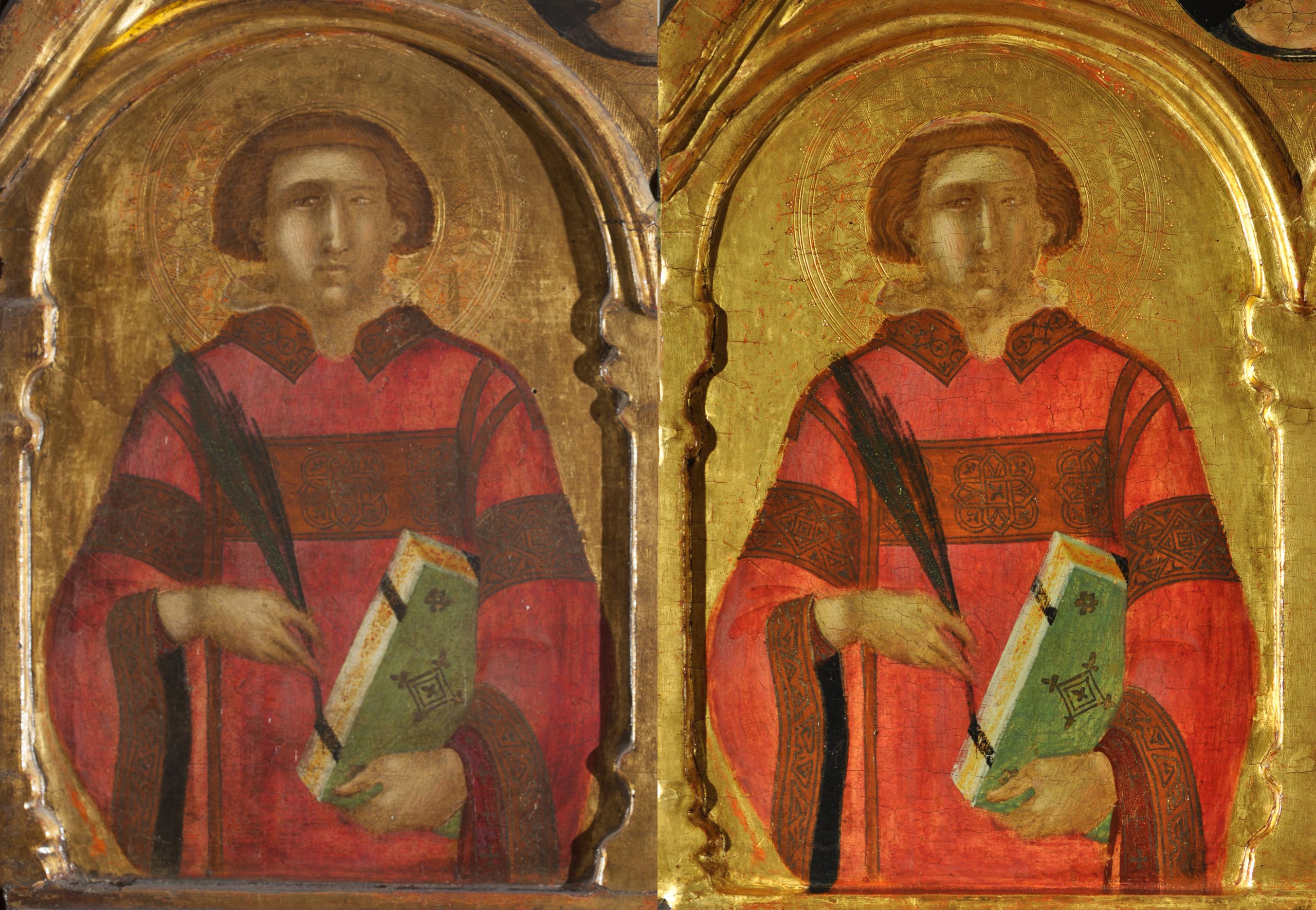 Detail: S. Marcellino before and after the restoration

OS: In total, how many people contributed to financing the restoration?

LD: It’s hard to count them all! Many people donated as groups. For example, groups of students of all ages came to visit the altarpiece when it was in the studio thanks to an arrangement that we had with the schools in Arezzo. Many of those visitors made donations. It should be said that we achieved our goals thanks to the generosity of both Italians and non-Italians, people who share our belief that our artistic heritage belongs to the entire world. Several important companies from the Arezzo area helped and we received a major gift from the Fondazione Cassa di Risparmio di Firenze. Other major donors include Power One Italy spa;  CHIMET spa; Katharine and Peter Darrow; Fabrizio Niccolai and Anna Detheridge; Giuseppe and Scota Benedetta Scassellati Sforzolini; TCA Precious Metal Refining spa; Pam and Doug Walter; Ada and William Weiller; and the Centro Chirurgico Toscano srl. All the names of the donors/groups are printed on the commemorative brochure that we made for the return of the altarpiece to the Pieve di S. Maria. 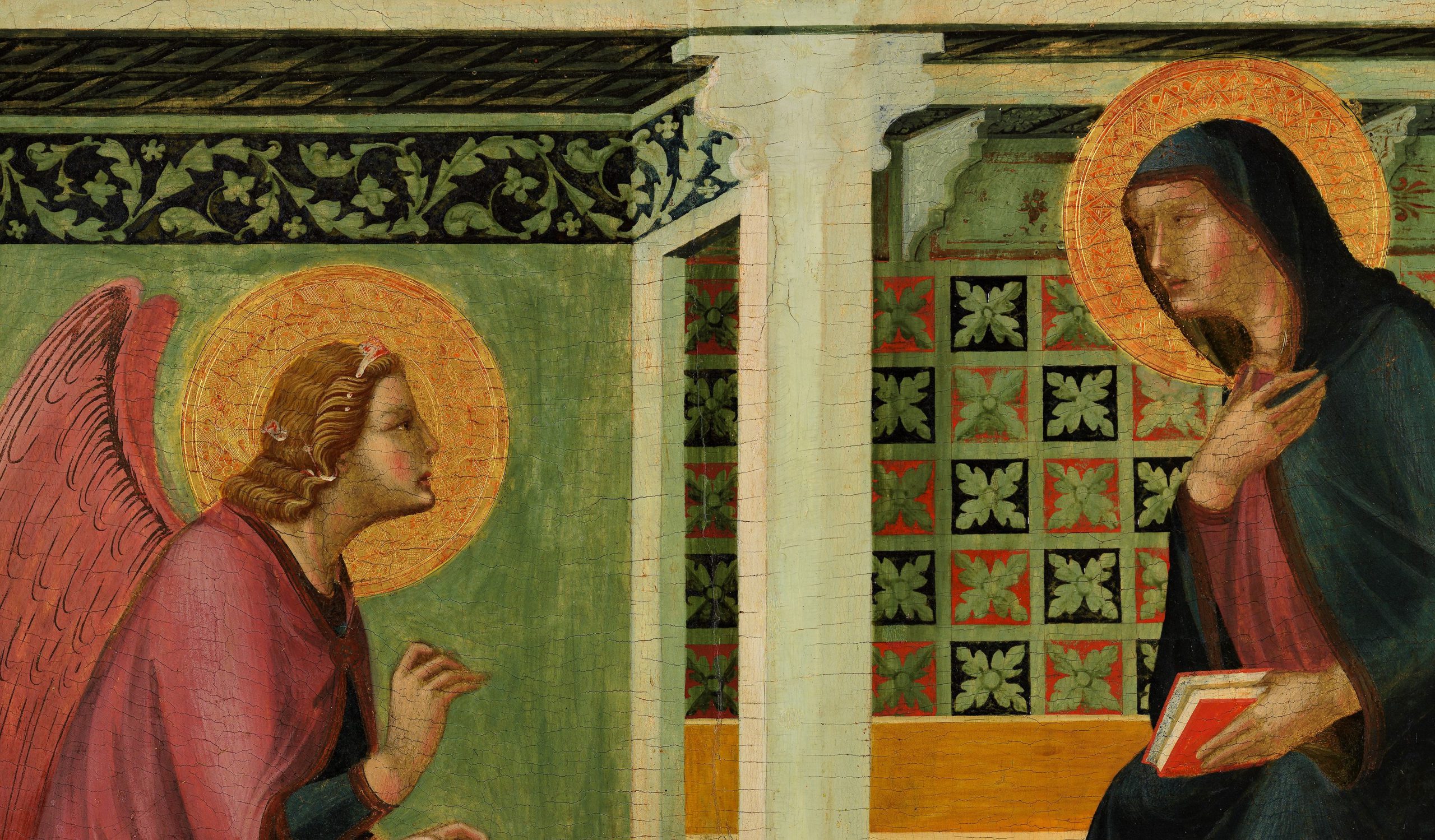 LD: Together with other large firms, we will be consulting on the restoration and preservation of a large, State-owned architectural project in central-northern Italy.

There’s still time to get involved!

Help build the frame for the altarpiece by donating here. 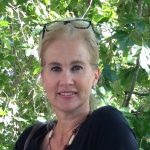 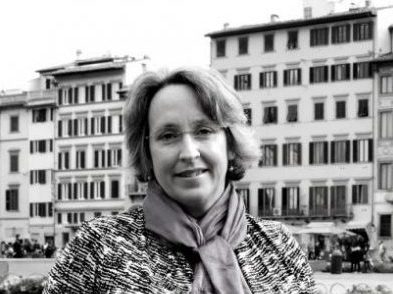 Before Elise Chapin and I ever met, our mothers were friends. Looking back on their era—the late 50s and 60s in Somerset County, New Jersey—their lives seems so distant from ... 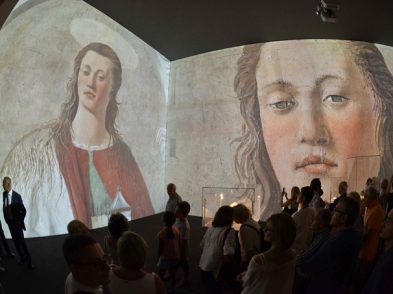 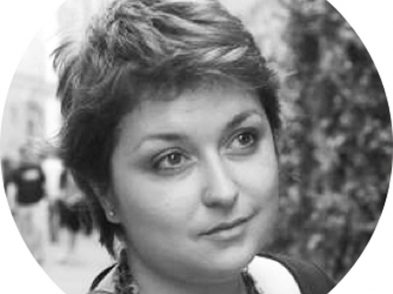 Oonagh Stransky, The Tuscan Times correspondent in Arezzo, interviews Elisabetta Bidini, the assistant director of Casa Museo Bruschi to find out what life is like behind the walls and in ...