The blue rooms of the eclectic Stefano Bardini Museum are fixed with 12 uncanny works that beguile viewers as they immerse themselves in the fantastical and, at times, unsettling objects by the British painter. Miniaturist Bosch-like details proliferate in the pieces that vary from three metres wide to a smaller scale with Surrealist, Flemish, Renaissance and even Gothic elements perceptible in the conceptual artworks that invite observers to contemplate and revel in the complexities of the pieces that have been described as Wunderkammers. On the occasion of Anj Smith’s first solo show in Italy, we met to discuss how the works dialogue with the permanent collection, engaging onlookers in a reflective process both on the pieces themselves and what they bring to their viewing of them. 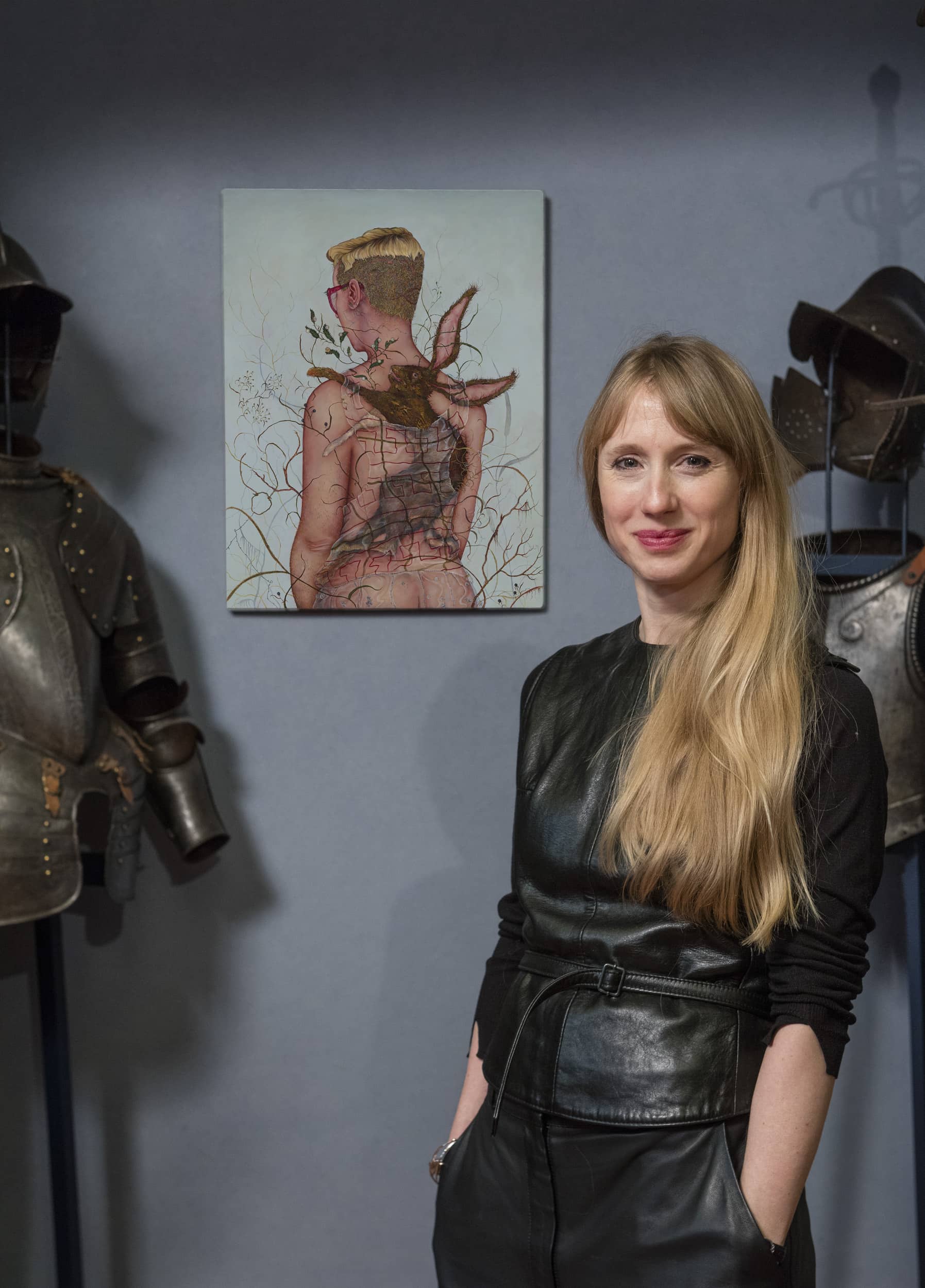 The title of the exhibition, A Willow Grows Aslant the Brook, is a reference to Shakespeare’s Hamlet, when Queen Gertrude eloquently describes the setting of Ophelia’s demise in Act 4 Scene 7:

There is a willow grows aslant the brook

That shows its hoary leaves in the glassy stream

Therewith fantastic garlands did she make

Anj Smith views Ophelia’s silence and the fact that she’s off-stage for much of the play as a crucial aspect. Being unheard becomes the catalyst for Smith’s piece titled False Steward (2019-20), in which we see a sole figure from the back with a cluster of details embellishing a thin veil. Enchanting flowers are in stark contrast with disconcerting elements like beetles and snakeroot, water hemlock and wolf’s bane, all poisonous plants, adding disquiet to what seems unmenacing at first glance. The piece is positioned in the armour room of the museum, with swords and the commanding presence of armour prevailing in our perception of the artwork, adding to the sense of unease and intrigue. Diamond shapes refer to the Harlequin from Commedia dell’arte, a figure that controlled the action of plays by tapping his stick, “intended to symbolize how stories change, and how information is given to us; what kinds of knowledge we prize as a society and who we dismiss,” Smith elaborates. 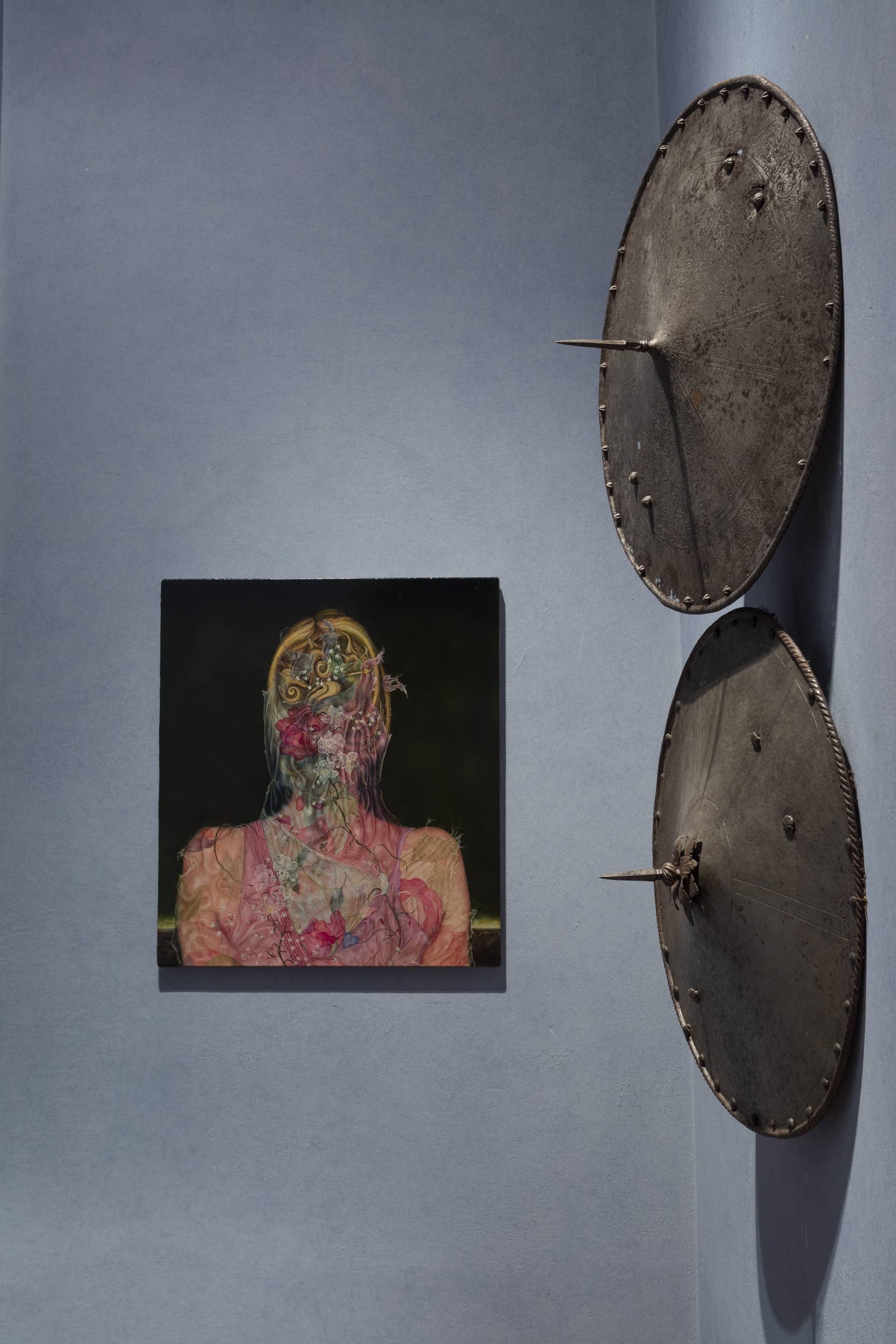 Incongruous components such as lipstick and skulls blend the familiar and unfamiliar, transforming our viewing of the works as the disruptive juxtapositions cause us to question. In fact, at the crux of the artist’s craft is the desire to prompt critical thinking and reject superficial or shallow consumption of information and art, urging us to slow down, reason and think in a decisively counter-cultural endeavour. “Traditional conservatism doesn’t apply to these works. We each have to find our own respective paths in and through the exhibition. I do a lot of research on Instagram and I love social media—I’m not a Luddite—but at the same time I feel there’s a danger that we could become culturally conditioned to scroll, scroll, scroll, and that is already having huge problematic implications in decision-making. The works are a kind of visual chicanery and are deliberately not easy. They have certain circumlocutions that ask the viewer to question because it’s exactly that action which I think is so valuable, honing that critical capacity; the practice of the deep dive and seeing the value in that.” 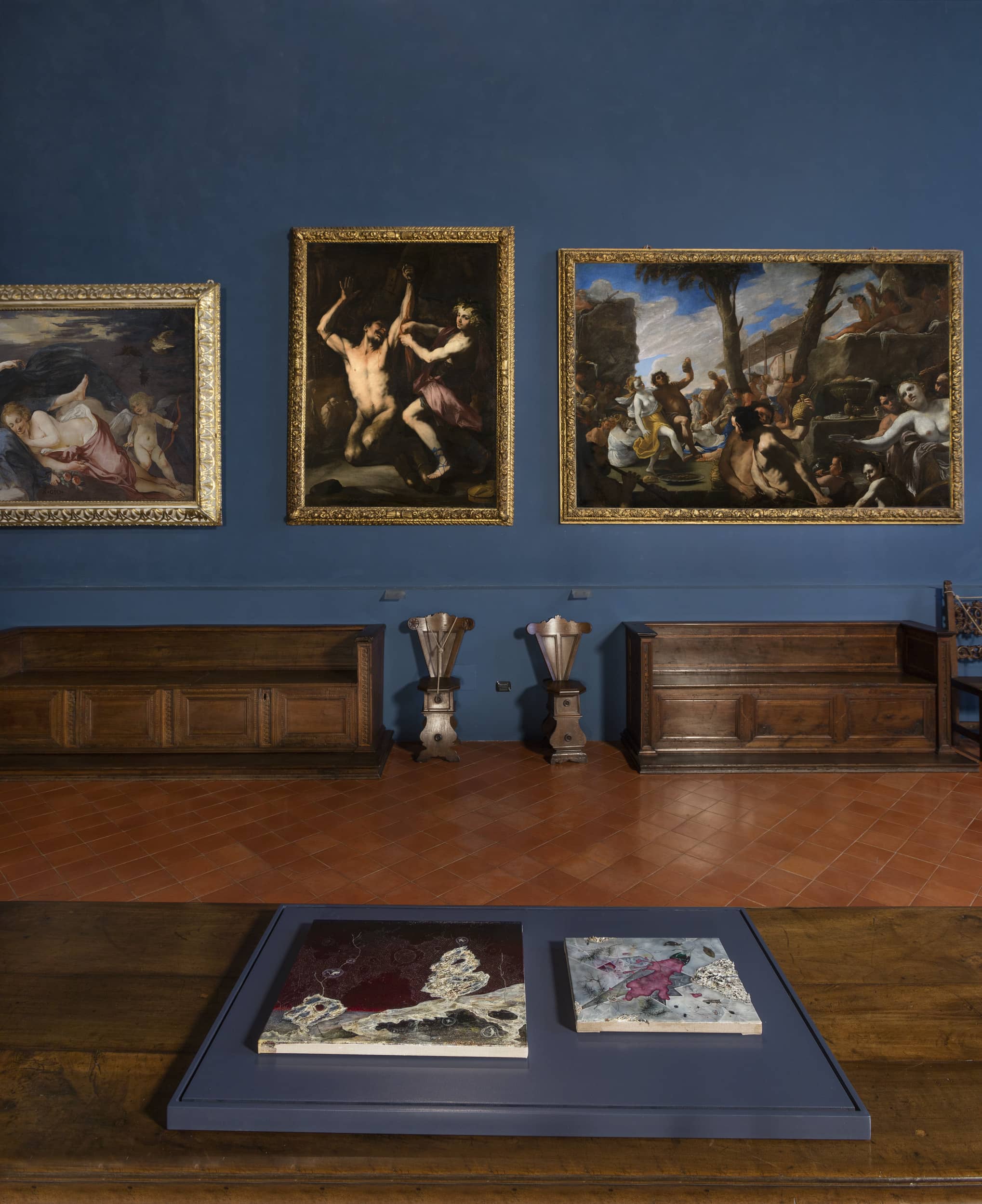 Works such as Flowerings of the Chocolate Cosmos (2020) were painted during the pandemic, with the psychological states the artist experienced expressed through a lush South American plant that seduces before we realize that it is partially trapped beneath ice and seeks to stretch outside the very frame. A smashed wine glass and the brightly coloured liquid spilling across the ice furthers the viewer’s fascination.

Curator of the exhibition, Sergio Risaliti, observed, “Smith reflects on the dangerous but fascinating fine line which exists between beauty and death, between depth and emptiness, as well as between pleasure and dissatisfaction.” The poetic and, at times, anxiety-inducing works reflect timely themes such as the fragility of nature, beauty and death, and contemporary culture’s ever-slackening ability to think critically, engaging the observer in an artistic and personal journey that begins when we arrive at the exterior of the centuries-old palazzo.

The exhibition titled A Willow Grows Aslant the Brook is curated by Sergio Risaliti and organized by MUS.E, in collaboration with Hauser & Wirth and Museo Novecento. It will be on display at Museo Stefano Bardini (via dei Renai, 37) until May 1.