In a show of over 80 artists’ work, Centro Pecci in Prato is celebrating 50 years since Galleria Schema in Florence’s via della Vigna Nuova opened in February 1972. The creation of artist Alberto Moretti, it quickly became the centre for avant-garde art in the city, exhibiting work in all manner of media by leading artists from Italy and beyond. At that time, Florence thrived on experimental art, music, architecture, design and theatre, reflecting in the arts the turbulence rocking Italian society and politics in the 1970s. The like of Galleria Schema is almost unimaginable today, but a handful of venues keep the spirit of radical adventure alive in Florence.

Florence in the mid-1970s was home to three centres for radical international contemporary art. At via San Niccolò 119r was Zona, where one of the solo exhibitions by American artist-filmmaker Bill Viola could be seen in 1975. At via Ricasoli 22 in 1974, in what had been a children’s clothing store, Maria Gloria and Giancarlo Bicocchi created art/tapes/22, one of the first video art studios in Europe, which Viola, then a recent graduate, soon joined as technical director. And on the first floor of via della Vigna Nuova 17 was perhaps the most significant of the three locations at that time. Galleria Schema opened its doors in 1972 to conceptual artists from Italy and abroad, and welcomed its Florentine audience to its versatile space that had been prepared by Superstudio, the legendary partnership of visionary architects.

The gallery adopted that group’s inventive “blue-sky” thinking and visitors often encountered the unexpected. It might be a project by an artist, like Giulio Paolini or Gilberto Zorio, associated with Arte Povera, then the dominant tendency in Italian art and still globally significant. Yet since the scope of Schema’s programme was broad, all branches of a rapidly expanding progressive art world were embraced. Consequently, film, performance and artist-led happenings were regular events, as were discussions with leading commentators, such as academic Eugenio Battista (who had created the ground-breaking Experimental Museum of Contemporary Art in Turin), critic Achille Bonito Oliva and Florence-based writer Lara-Vinca Masini.

Perhaps the importance of Schema lay in its role as the portal through which contact with the international avant-garde reached the artist community of central Italy in the era before the easily accessible digital sharing of information. Artists from outside Italy were invited to show alongside their Italian contemporaries, emphasising the vital role of experience and exchange in the evolution of new techniques. One of those artists was Vito Acconci, the highly influential American artist who used speech, sound and performance to cross boundaries between private and public space. His primary instrument was his own body and at Schema in 1973 he presented Ballroom, which turned out to be his last public performance after a young woman in the audience interrupted his plan of action by attempting to kiss him. Acconci then turned to sculpture.

Language was a preoccupation of many of the artists that Schema presented. Words allowed for a measure of separation between the artist and the physical execution of an artwork, and played a primary role in stressing ideas over visual forms. Americans like John Baldessari, Dan Graham, Joseph Kosuth and Sol LeWitt were among the first to give words such a central role, and they could be seen at Schema in the 1970s and 1980s, alongside a generation of Italian artists who embraced the same argument, namely that ideas alone can be art as much as canvas and paint. Among them were Ketty La Rocca, who sought through gesture a new language free of masculine influence that women could use, and Maurizio Nannucci, whose work makes use of photography, video, neon, installation and sound.

Nannucci was also a founder member of the artists’ cooperative that opened the non-profit space Zona and which continues the spirit of collaboration between artists at BASE Progetti per l’Arte, also in via San Niccolò. In fact, BASE is effectively the sole heir to Schema as well as Zona. (Zona closed in 1980-something and Schema followed in 1994. Art/tapes/22 was even more short-lived, ceasing operations in 1976, although its legacy is immense.)

Occupying two narrow ground-floor rooms with windows onto the street, BASE has worked with some of the highest profile conceptual artists from around the world in its 24-year history. Being non-profit, its priority is the aesthetic quality of the projects that emerge from its invitations and collaborations. Three or four occur each year, with varying durations. The most recent featured the highly regarded French artist Louis Gréaud. He scattered 2,000 leaves of copper on the gallery floor, which, for two months, were visible only from the street, the interior being inaccessible to visitors. The gallery became a display case where the beauty of the piece, called the Boredom of the Atom, lay physically out of reach, undisturbed by life and the elements outside.

The decade from 1965 onwards can seem now like an heroic period for experimentation in art that, by rejecting the market, was ideological in its rigour. By turning back to its building blocks and starting afresh from near zero, could art respond to film and television, to the perceived limitations of painting and sculpture, and to society changing in the shadow of the bomb? Similarly, in those years, Florence could balance the richness of its past with the vital modernity of the music, poetry, architecture, design and visual art being made in its studios.

While those days have passed, Galleria Il Ponte in via di Mezzo 42B keeps its memory alive with exhibitions of remarkable depth and historical value featuring figures from that time, as well as new faces. Opened in 1965 by Vincenzo Alibrandi, the gallery has occupied its current location since 1977: the programme is now determined by the founder’s son, Andrea. Subjects in recent years have included artists at the forefront of Italian culture in the 1960s, like Jannis Kounellis, Paolo Icaro, Aldo Mondino and Luca Maria Patella. Like Schema in its heyday, the gallery’s focus is international, with stress put on European modernism. A case in point is the current show, a rare public survey of large works by French abstract painter Michel Parmentier (1938-2000), the first in Italy. Over the course of his career, Parmentier developed a highly controlled process of folding a canvas at measured intervals into alternate bands of white and a single colour.

Colour was also strictly controlled, beginning with only blue in 1966, then grey in 1967, and red in 1968. His painting was just painting, without subjectivity or expressiveness, even denying the artist’s identity, only stripes, one after the other. Then in 1968, restless discontent led him to the truly radical gesture of stopping painting altogether. He resumed only in 1983 with stripes again, using oil stick and transparent paper as well as canvas, precisely folded. Parmentier was an artist of conviction who refused to compromise his principles and being among his canvases one feels the charge of that severity.

All these venues deserve celebration, but should also prompt reflection. As a city with the world’s attention, how does Florence prevent its glorious heritage in culture from stifling the achievements of today? 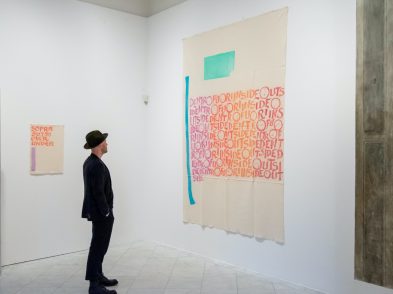