Restoration Conversations magazine is a bi-annual online publication, which ‘restores’ the creative achievements of historic women for today’s audiences. Its features draw inspiration from the mission of Calliope Arts, a not-for-profit organisation, based in Florence and London, dedicated to raising awareness of women’s stories in the arts, sciences and social history through restoration, exhibition, education and research, as well as by means of ‘conversations’ with curators and sector experts. Printed copies available for purchase.

Michelangelo’s home is Artemisia’s Abode. This issue focuses on Florence’s Casa Buonarroti – the home of Michelangelo, who Artemisia Gentileschi honoured with her Allegory of Inclination, the painting now being restored, under the public’s watchful eyes.

The project ‘Artemisia UpClose’ reveals how the painter originally conceived her work, with the digital recreation of Artemisia’s allegorical figure, without the veils added to censor its nudity some 60 years after it was authored.

The issue also spotlights venues in Florence and London: from the Royal Academy of London’s show on female artists of the avant-garde movement in Germany to the Levett Collection featuring the female pioneers of Abstractionism, and Florence’s Fondazione Arte della Seta Lisio, with its legacy of silk making.

Restoration Conversations magazine and cultural broadcast is supported by Calliope Arts – a not-for-profit organisation based in Florence and London that promotes public knowledge and appreciation of art, literature and social history from a female perspective, through restorations, exhibitions, education and cultural initiatives. 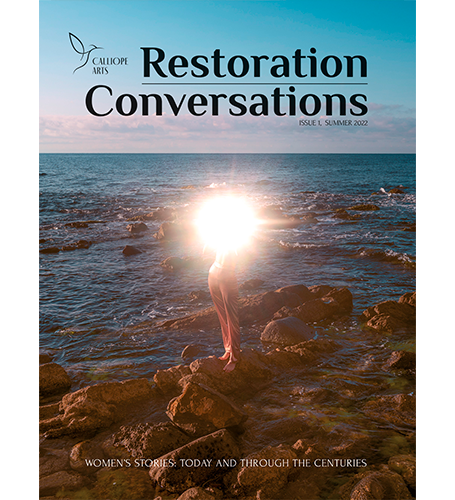