Historically, Tuscany is a region that has always been attractive to artists because of its rich cultural heritage, luminous light, and landscape. The sculpture gardens created during the 1980s and 1990s at the Villa Gori near Pistoia, the Giardino dei Tarrocchi at Pescia Fiorentina, or the Giardino di Spoerri at

Historically, Tuscany is a region that has always been attractive to artists because of its rich cultural heritage, luminous light, and landscape. The sculpture gardens created during the 1980s and 1990s at the Villa Gori near Pistoia, the Giardino dei Tarrocchi at Pescia Fiorentina, or the Giardino di Spoerri at Seggiano, Grossetto, testify to the continuity of this tradition. The Chianti Sculpture Park,

which opened last year, is the most recent artistic encounter between the natural Tuscan environment and a broad range of artistic sensibilities. Located just 10 kilometres north of Siena and approximately an hour from Florence, the 35 acres of woodland is home to an international

collection of sculptures, the majority of which were specifi cally made for a site chosen by the artist. Owned by Piero and Rosalba Giadrossi, the park was initially inspired by a visit to Kirstenbosch Park near Cape Town, where a large number of Shona sculptures are on permanent display under the majestic Table Mountain. The Giadrossis have been involved with contemporary art for many years, running the La Fornace Gallery opposite the park, a beautifully restored old pottery in which they have lived for over twenty years.

The underlying theme of the park, the harmony between art and nature, is obvious as soon as one arrives at the entrance gates made of wrought iron in the shape of linden leaves. Even at this early stage in its evolution the Chianti Sculpture Park has established an impressive range of international sculptures that expresses the enormous changes that have occurred in art since the second half of the twentieth century. A distinctive feature of the collection is that almost 50 percent of the works are by female artists and that the twenty-four sculptures are drawn from the continents of Africa, Asia, North and South America, and Europe. Each artist has brought to the Tuscan region his/her own cultural background and artistic vision to create a wide range of works with different themes, aims, and materials. Thus there are sculptures made from traditional marble and bronze side by side with those that have employed newer art materials like neon, glass, found objects, and stainless steel.

Bill Furlong’s Off the Beaten Track is one of the latter consisting of sixteen stainless steel cubic boxes placed in pairs along a thirty metre track to the side of the main train rough the wood. While the stainless steel refl ects the changing patterns of the surrounding nature, it is not until the visitor walks between the boxes that the artist’s purpose is revealed. Each box emits different sounds

which have been pre-recorded and edited by the artist and relate to the nearby city of Siena, whose towers are visible from the entrance to the park. The juxtaposing and mixing of the sounds prevents a linear listening experience and induces a strange sense of bilocation in which the bustling city noises intrude into the quietness of the countryside.

A more private experience can be had by entering Pilar Aldana Mendez’s The Time Trap or by resting on Anita Glesta’s ‘couches,’ Dialogue, made of travertine in colours evocative of Siena’s Cathedral. Kei Nakamura’s architectural sculpture, La Casa Nel Bosco (House in the Wood), with its repeated leaf motif, alludes to surrounding nature as well as to pre-historic building processes. Monumental sculptures like The Blue Bridge, Island, Energy, Harmonic Divergence, Balance, La Pietra Sospesa (Suspended Stone), The Keel, Edifi cio Incompiuto (Incomplete Building), Rainbow Crash, Xaris, and Homage to Brancusi, stand alongside more discrete sculptures like Limes, Chianti, The Purifier, and Coin de Bois Blanc (White Wood Corner). Some sculptures have an overtly political theme: Faith and Illusion, The Milk Factory, Por La Libertad de Prensa (Freedom of the Press,), while Dominic Benhura’s children play the international game of leapfrog (Leapfrog) and Neal Barab’s playful marble fi gures dance to the Beatles’ old song, Twist and Shout. This park, as well as the others above, demonstrates that contemporary sculpture is thriving in an area already famous throughout the world for its treasure chest of Renaissance art.

Brenda Moore-McCann is an art critic-historian with an interest in contemporay art living between Dublin and Tuscany. She is the author of The Chianti Sculpture Park (2004) and is currently writing a book on the artist Patrick Ireland (a.k.a. Brian O'Doherty) www.seeartmatters.com 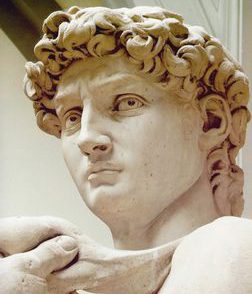 Looking for Mr Right? He lives on Via Ricasoli

Florence continues to be one of the most popular tourist destinations in Italy and Michelangelo’s David the masterpiece everyone wants to see. This is not new. The gigantic scale of the statue has been a source of wonder since Florentines first saw it in 1504. Indeed its size