Since medieval days, the territorial battles between Florence and Siena have become the stuff of legend. The battle of Montaperti is still a dispute that can make blood pressure rise and cause faces to become red with indignation. The Guelphs (Florentines) and the Ghibellines (Sienese) fought out their differences in

Since medieval days, the territorial battles between Florence and Siena have become the stuff of legend. The battle of Montaperti is still a dispute that can make blood pressure rise and cause faces to become red with indignation. The Guelphs (Florentines) and the Ghibellines (Sienese) fought out their differences in 1258 at the hill of Montaperti outside Siena. The opposing sides were fairly even until the evening, when a man called Bocca degli Abati, a Florentine but apparently a Ghibelline at heart, cut off the hand of the Florentine standard bearer. With a fallen flag, the Florentines lost hope and were routed by the Sienese. The river Arbia was said to have ‘run red with blood,’ as over 15,000 men died that day. Dante Alighieri (a Guelph) reserved a place for Bocca degli Abati in the ninth circle of Hell in his Divine Comedy.

From the wine drinker’s perspective the origin of the Black Rooster or Gallo Nero is much more important. As the battles for territory continued in the 14th century, a competition was held between Florence and Siena to determine, once and for all, the boundaries of each city-state. It was agreed that riders would set out from each city at cock-crow, and that the point at which they met would determine the boundary of each community. The Sienese selected a fat, well-fed rooster, but the Florentines chose a skinny, malnourished black one. The hungry Florentine rooster awoke very early, and thus the Florentine horseman covered much more ground than did the Sienese one.  They met at Fonterutoli, giving Florence rule over the majority of the Chianti Classico area. Artist and writer Giorgio Vasari painted a black rooster on the ceiling of the Palazzo Vecchio, and the Consortium chose the Gallo Nero as their symbol.

Wine has been produced in the area since Etruscan times, and as far back as 1398, legal documents mention Chianti wine. In 1716, Cosimo III, Grand Duke of Tuscany, defined the geographical area. This, however, did not stop the emergence of bogus producers of wine claiming their vintage to be Chianti. Over 100 years ago, Barone Ricasoli organised a ‘Consorzio’ of wine producers to discipline itself. The Barone’s descendents live in the Castello di Brolio, which dominates the southern Tuscan hills. In 1924, in Radda in Chianti, a voluntary group met to promote and authenticate wine. That organisation is now known as ‘Consorzio del Marchio Storico-Chianti Classico.’ Each year the Consorzio checks the grape varieties and yields of its members’ vineyards and issues the famous ‘Gallo Nero’ symbol to the producer.

Looking for a relaxing place to discover Florence’s magic and sip on some vino? There are many long-term and short-term luxury apartment rentals in Florence waiting for you! 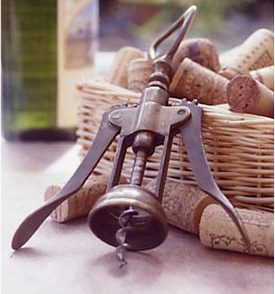 There is no doubt that the standard of Tuscan wines has improved dramatically in the last two decades and that the battle between Tuscany and Piedmonte continues, as both strive for the premier accolade in Italy. However, even these excellent wines may be ‘corked’, and this can lead