There is no doubt that the standard of Tuscan wines has improved dramatically in the last two decades and that the battle between Tuscany and Piedmonte continues, as both strive for the premier accolade in Italy. However, even these excellent wines may be ‘corked’, and this can lead

There is no doubt that the standard of Tuscan wines has improved dramatically in the last two decades and that the battle between Tuscany and Piedmonte continues, as both strive for the premier accolade in Italy. However, even these excellent wines may be ‘corked’, and this can lead to embarrassment in a restaurant or frustration at home. One thing that always provokes a heated debate among wine drinkers is the subject of ‘closure’. It does not matter if the wine is a ‘super Tuscan’, premiers crus Bordeaux or a fine syrah from Australia, the act of pouring the contents of a corked bottle down the sink induces tears in even the most masculine male!

The expression ‘corked’ has nothing to do with pieces of cork floating in your glass and can even occur in wines which have not been sealed by cork. The problem is ubiquitous, and its frequency is very hard to document but it happens from two to ten percent of the time depending on whom you read and believe. Wine can be ‘corked’ if it costs €10.00 or if it costs €2,000. A ‘corked’ wine describes one that has been contaminated by the chemical TCA (trichloroanisole). This chemical can be found either in the cork or the barrel. It gives the wine a musty metallic taste and smell. Like everything else in life, there is huge variation in the degree of contamination. Almost anybody can detect a grossly ‘corked’ wine, but lower levels of contamination are more difficult to notice. A few tips: smelling the cork has been totally discredited even though many waiters have a habit of making a show of doing this. Put the glass firmly on the table and ask the waiter to pour a small amount. Put your nose into the glass and smell. Resist the temptation to swill the wine in the glass before you smell. Any imperfection in the wine will be disguised by swilling and a faintly corked wine may not be recognised. Recently, a Danish friend, economist and bon-viveur who lives in Tuscany told me over an excellent lunch that he adds a little sparkling water to a small amount of wine. He insists that this increases the possibility of detecting a corked wine. Incidentally, it is very bad form to taste the wine at this stage. ‘Corked’ wine can be identified by the smell better than the taste. If you have not decided the wine is ‘corked’ after smelling it, don’t be afraid to send it back once you have tasted it.

Corks have been in common usage since the 17th century although the Greeks used cork and pitch to seal amphoras. The English are credited with the development of the glass bottle for widespread use, and with it came the cork. The cork trees are a variety of oak, Quescus suber, which are long-lived and have a very thick skin of a spongy substance called cork. The greatest concentration of cork trees is in Portugal although other parts of the western Mediterranean and neighbouring Atlantic countries produce significant quantities. The material is perfect as a seal because it can last for up to 50 years in a bottle. It is relatively impermeable and light and makes a lovely sound when it is extracted from the bottle.

So what is out there competing with cork? At a tasting of the famous Penfold’s wines from Australia last year, Oliver Crawford confidently predicted that eventually all Penfold’s wines, even their classic Grange wines at €200 per bottle, would eventually come in screw top bottles. Well, nobody can really be sure and consumer resistance is strong. In general, drinkers believe that screw tops are acceptable for young white wines but not appropriate for serious wines that will be cellared for years. The alternative to screw tops is plastic. These are difficult to extract and almost impossible to re-insert into a partly consumed bottle, although this has rarely been a problem in my experience. However, plastic can lose its spring after a few years, allowing oxygen to enter the wine with deleterious results.

During a visit to Châteaux Margaux, I was greeted with disdain when I inquired if they had considered screw tops. Of course, like everybody else, I am sure they are secretly experimenting with various forms of ‘closure’ other than cork. In Tuscany natural cork is still preferred. I have come across very few fattorias which use synthetic ‘cork’ or screw tops, but over time this may change. The debate continues and time will eventually tell if cork will remain the ultimate form of ‘closure’. I hope that I am not around to witness its demise. For me, the sound of a cork popping will never be replaced  by the dull plop of a plastic stopper or the total absence of sound when a screw top is undone. 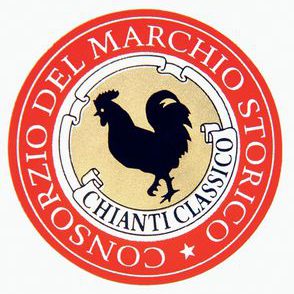 Since medieval days, the territorial battles between Florence and Siena have become the stuff of legend. The battle of Montaperti is still a dispute that can make blood pressure rise and cause faces to become red with indignation. The Guelphs (Florentines) and the Ghibellines (Sienese) fought out their differences in