In Florence, the worth of bar (or what we would call a café) is measured by its coffee—so much so that espresso machines are made to hold an upended bag of coffee in full display so that customers can see which roaster the café uses.

In Florence, the worth of bar (or what we would call a café) is measured by its coffee—so much so that espresso machines are made to hold an upended bag of coffee in full display so that customers can see which roaster the café uses.

Piansa is the city’s premier coffee roaster (and its grand bar on Viale Europa one of the city’s best).  Owner Piero Staderini approaches coffee roasting with the dedication and seriousness of an artisan. His blends are the highest quality (primarily first class arabicas from places like Puerto Rico, Hawaii, Jamaica, Kenya and Ethiopia, with the addition of a superior robusta to round out the flavors)—roasted in less than 60 kilo batches for maximum control.  The roasted beans must be the deep brown color of a monk’s habit, and are sifted through by hand, so that any lighter beans (signifying under ripeness at harvesting) are discarded.

While the world’s mammoth coffee chains would have you believe otherwise, every Florentine knows that even the finest roasted coffee beans don’t insure a spectacular caffé—it takes a good barista to make an espresso that is just the right altezza (height) with a thin layer of fine foam on top; and to heat, swirl and pour the milk for a cappuccino so that it is hot while not scalding, and neither overly milky or foamy.  Of course these are only two most typical versions of il caffé—in truth, the specificity with which people order their daily brew is astonishing.  A caffé can be macchiato (stained with milk) either caldo (hot) or freddo (cold); it can be corretto (“corrected” with a splash of spirits such as grappa);  doppio (a double shot of espresso); stretto (short) or lungo (tall).  A cappuccino can be bollente (scalding) or tiepido; in tazza (a coffee cup) or nel bicchiere (a glass); con tanta sciuma (foamy) or poca schiuma (milky).

Il caffé might be the drink which keeps Tuscany up and running but it is not the one for which it is most famous.  That distinction goes of course to il vino,a subject so rich and complex we can barely skim its delightful surface within these few pages. For ages Tuscany’s archetypal wine was chianti,made in the geographical zone of the same name which begins just south of Florence and continues almost as far as Siena. In pre-industrialized Italy it was a thirst quencher, sold sfuso (un-bottled) or in the straw covered fiaschi synonymous with chequered tablecloths and cheap Italian eats. Later it was mass-produced with quantity taking precedence over quality. No longer. In the last few decades, Chianti has undergone what many have labeled a renaissance in winemaking, and the area now produces some of the most exciting wines in the whole of Italy if not the winemaking world.

Sangiovese (“blood of Jupiter”) is the Tuscan wine grape per eccellenza, yielding slightly acidic, earthy wines, low in fruit and tannins.  It is the predominant grape in Chianti and Chianti classico wines (which historically were blended with Canaiolo and white Trebbiano and Malvasia grapes). New governmental regulations permit Chianti wines to contain up to 20% of international varieties such as Merlot, Cabernet Sauvignon and Syrah. These changes as well as new planting and aging practices adopted by such wineries as Fonterutoli, Isole e Olena, Castello di Brolio and Fontodi are producing powerfully structured, deeply hued, fruitier wines that hold up well in the cellar.

A parallel development in the Tuscan wine world is the advent of the so-called “Super Tuscans,” born in the wild seaside hills of Maremma, particularly the Bolgheri region, and credited in great part to the Antinori family, Florentine winemakers since the 14th century.  “Super Tuscan” is not an appellation but a colloquial reference to wines which fall outside the DOC (denominazione di origine controllata) and DOCG (denominazione di origine controllata e garantita) governmental standards but are of such superb quality that to label them simply vino da tavola would be heresy.  Antinori’s Tignanello,  the first Super Tuscan to blend a percentage of Cabernet Sauvignon with Sangiovese has met with resounding acclaim, as has its Solaia (a Cabernet base blended with Sangiovese) and the wines of its Ornellaia estate (particularly Massetto and Ornellaia). Other first class wineries such as Fattoria Le Pupille and Jacopo Banti have followed suit.

To the west of Florence is the wine zone of Carmignano, dominated by the Capezzana winery whose Villa di Capezzana and Ghiaie della Furba wines have earned it top honours from the respected Gambero Rosso guide to Italian wines. To the east of Florence is the Rufina area, where the Marchesi Frescobaldi, noble Florentine winemakers, produce their outstanding Chianti Rufina Montesodi. Siena’s hilltowns are home to the lofty Brunello di Montalcino wines and the more accessible Vino Nobile di Monte-pulciano.

The best Tuscan wineries almost always make Vin Santo of their own, the sweet amber dessert wine that is marks the end of many a Florentine meal. The process for making Vin Santo is long and arduous—white grapes are air dried on rush mats for months, pressed then vinified for three years in small casks of oak or chestnut—making the finest examples of it hard to come by and worth the hefty price they command.   Vin Santo of this quality is known as a vino da meditazione, no longer a dessert wine, but one worthy of being savoured all on its own.

Lori De Mori writes, gardens, bakes bread and raises her family in a restored farmhouse in the hills outside of Florence. She is the author of Florence; Flavor of the World; Savoring Tuscany and Italy Anywhere. She has written about food for many pubblications including Bon Appetit, Saveur, The Telegraph, and The Indipendent. 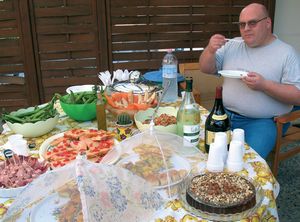 Flavours of the world: Florentine cuisine

There is a habit in Italy—and Florence is no exception—of talking about food while eating (“wonderful meals I’ve eaten” being a particularly frequent topic).  And if you were to ask a Florentine how important food is in the grand scheme of