Isn’t winter a drag?  Rest assured though, it’s better here than in my home town Edinburgh, which gets the worst of the eternal dark Scottish winters.  At this time of year, Scots must actively seek ways to lift the spirits, and for me the book ‘Looking Up in Edinburgh’ does the trick.  It catalogues the hidden pleasures found if you’d only raise your head 45 degrees– a simple but effective strategy I try to apply wherever I travel.  And the picturesque hilltown of Orvieto– full of hidden gems in the heavens—lifts even the gloomiest of spirits.

A two hour train journey south of Florence, is where the Umbrian vine fields open out into wide expanses and jagged crops of rock start rising sporadically from the land.  Leaving Orvieto station, the town looms up, growing organically atop one of these rocky remnants from the volcanic past.  Known as La Rupe (The Cliff), Orvieto boasts a long history revealed in Romanesque, Gothic and Renaissance heritage, as well as extensive subterranean complexes.  Archaeological finds bear witness to an Etruscan settlement in the 7th century BC, and Bronze and Iron Age tribes before that.

A short funicular ride up, and a hop on the shuttle (joint ticket) brings you straight to the jewel in Orvieto’s crown – the renowned and magnificent duomo.  It’s one of those cathedrals you can never quite step far back enough to take in – that’s always leaning precariously forward in tourist snaps.  Encrusted with technicolour sparkling mosaics, twisted with marble pillars, littered with figurines human and animal, and emblazoned with carved bas-reliefs, the façade is a full-on opulent assault. Brought about by hundreds of artisans over six centuries, it’s a staggering example of the force of human ambition.

The huge interior offers no rest from the neck-ache, and the San Brizio Chapel contains a jaw-dropping Signorelli fresco cycle, notable for the uncommon subject matter – the Last Judgement and Apocalypse – and the superlative technique – a major influence on Michelangelo.  The corporeal scenes conjure demons of doom more potently than they render paradise – more stick than carrot for Orvieto’s volatile masses.  Every guide book gives a different account of who and why numerous contemporary figures appear, including the artist himself and his estranged lover, immortalised cruelly as the Whore of the Apocalypse.  The lesson – don’t sin, of course, but more importantly, always treat artists kindly.

Orvieto offers cobbled mediaeval streets whose higgledy-piggledy meanderings have you losing your way in no time.  It’s not a bad place to be lost in, pottering the traffic-free lanes in the old quarter being one of its joys.  Every corner brings another picture-postcard view of the kooky meeting of multiple archways and many-hued houses.  Bits of houses seem to have grown on each other like layers of pastry, and as the town has evolved, buildings have acquired something of the rock beneath about them.  It’s a living history, with intriguing scars of vanished dwellings marking the walls that remain.

Orvieto is home to many artists and it’s easy to see why – a romantic could get carried away imagining the many lives and hearts which have come and gone here.  As with all Italian cities, grand old palazzos are now broken up into many odd-shaped units.  Keep looking up and more often than not you’ll glimpse old frescos on the unlikeliest of ceilings, sometimes sawn in half by new walls but still as vibrant as the day they were painted.

Being from the grim north, it’s the sunshine that bewitches me most.  Afternoon light plays enchantingly on the rugged tufa buildings, painting everything a rich glowing gold.  I want to scoop it up and carry it in my pocket.  And just as you’re lost amid narrow streets, the view of the surrounding hills sneaks in and steals your eyes away.  The blanket of vine and olive groves pierced only by the odd cypress or campanile is a sight that brings instant serenity.  Whatever the weather, the mottled colours lend everything a water-colour mistiness.  In contrast, distant snowy mountains twinkle enticingly.

If you look over the western edge you can see the geometric mini-city of the Etruscan Necropolis, from whose tombs a panoply of pottery, jewellery and other objects have been excavated and fill the city’s museums.

I find it comforting somehow to look out over the land that has reaped the produce I feast on – local Novello wine and the famous Orvieto Classico, olives, truffles.  Other Umbrian specialties include wild boar and pigeon. There are plenty of little delicatessens, chic boutiques and swanky restaurants too, for enjoying the warmth of the indoors.  A tempting year-round stream of festivals, concerts, events and exhibitions is maintained.  From the recent Umbria Winter Jazz which had the rain-drenched streets swinging to New Orleans beats, to regular degustazioni days where a single ticket lets you graze as much as you like from local food stalls dotted around town.  All in all, Orvieto is the ideal winter weekend get-away – perfect for keeping your chin up. Just cross your fingers the sun turns up too. 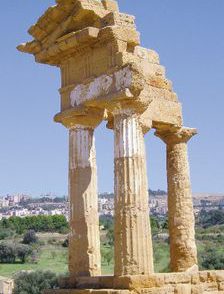