The Devil’s Bridge in Tuscany

What with all the murder and mayhem going on in the muddled Middle Ages, one might think the devil would have had better things to do. But instead of keeping traffic-from peasants to popes-moving smoothly through the Gates of Hell, the Prince of Darkness was apparently flitting around 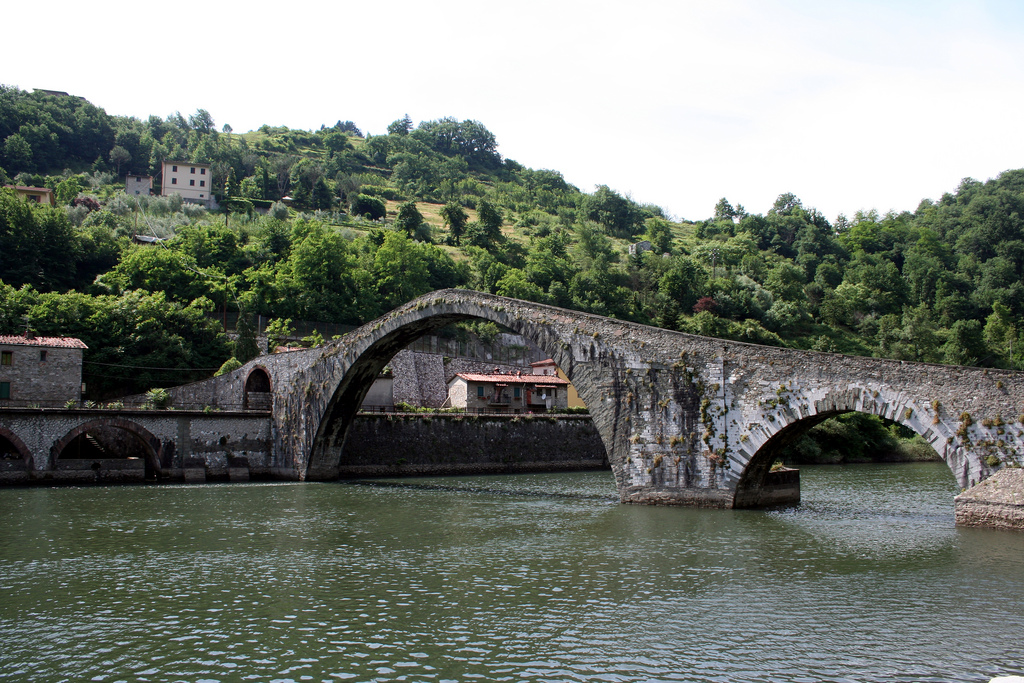 What with all the murder and mayhem going on in the muddled Middle Ages, one might think the devil would have had better things to do. But instead of keeping traffic-from peasants to popes-moving smoothly through the Gates of Hell, the Prince of Darkness was apparently flitting around all over Italy and indeed, all over Europe, building bridges.

And if one can believe local legends (and who is to say they are wrong?), there is still evidence of his diabolical work in Italy today. From Piedmont to Lazio, nine so-called Devil’s Bridges dot the landscape. Almost all date from 1000 to 1600, a good time for folklore to flourish. Delicately arched and made of stone, all are technological achievements and some are architectural wonders. Adding a Faustian element to their history certainly enhances their appeal-and helps the tourist industry.

Elsewhere in Europe, France has seven ‘devil’s bridges,’ the United Kingdom and Germany each three, Portugal and Switzerland each two, and Bulgaria, Slovenia, Romania and the Netherlands each one. But Italy, which knows a thing or two about legends, has the most.

Although Italy’s ‘devil’s bridges’ are hundreds of miles apart and built in different centuries, most of the stories about them are remarkably similar: The devil promises to build a bridge if he gets the first soul that crosses. After it is built, the humans beat the devil at his own game, sending a goat-or, variously, a pig, dog, cat, rooster-to make the maiden crossing.

The most famous one in Italy is the spectacular bridge, officially Ponte della Maddelena, at Borgo a Mozzano over the Serchio River north of Lucca. (for more information, see TF 89). According to the popular local legend, a frustrated builder couldn’t finish the bridge on time, and a distinguished-looking merchant suddenly appeared and promised to finish the task overnight. The catch? The builder had to give him the soul of the first living thing that crossed the bridge. Indeed, the bridge was built, but the frantic builder, on the advice of the bishop of Lucca, sent a pig across. The devil was furious and threw himself into the Serchio.

At Bobbio in Emilia Romagna, the 280-meter ‘devil’s bridge’ across the Trebia River dates at least from 1196 and is called the Hunchback Bridge. Here, the devil is supposed to have made a pact with St. Columbanus, a fifth-century Irish missionary who died in a monastery there. The devil was fooled, however, when the saint sent a dog instead of a human.

In Piedmont, the Devil’s Bridge at Lanzo Torinese spans the Stura River. It was built in the late 1300s along an old mule trail that descended from the Alps. Like the legends of other bridges, the devil is supposed to have built the bridge in a single night in exchange for the soul of a local resident, and, of course, the devil was fooled. There is another version, however, in which villagers protested when local authorities decided to impose a tax on wine to pay for the bridge. Al diavolo il ponte! they cried. ‘To hell with the bridge!’ Despite the protests, the tax remained.

Also in Piedmont, the devil is supposed to have built the bridge at Dronero, which cleverly featured a drawbridge that was the only way to enter the village.

And local legends credit the devil for the bridges at Blera, a small town in northern Lazio near Rome, and the one near Bastardo, in central Umbria. That one probably dates from Roman times (was the devil around even then?). The bridge at Torcello in Veneto is known, for obvious reasons, as Ponticello del Diavolo, the devil’s little bridge. Or maybe it was a little devil?

One of my favorite stories about a ‘devil’s bridge’ surrounds the one at Cividale del Friuli, in the far northwestern part of Italy. Here, the devil brought along his mother (who knew the devil had a mother?) and she carried the final rock in her apron. But the villagers defied the devil’s request for the first soul to cross the bridge. They sent a dog or a cat-the versions vary-and the devil and his mother disappeared.

The lone ‘devil’s bridge’ in Italy that does not include the Faustian legend is in Ascoli Piceno, in the Marche region. The bridge that stands beside a fort that was once used as a prison became known as the ‘devil’s bridge’ because condemned prisoners had to cross it.

The bridge at Borgo a Mazzano is in Garfagnana, Tuscany’s treacherous and mysterious territory that has spawned many scary stories. Not far away, near Monte Forato, is a grotto with an underground river that is supposed to be the entrance to Hell. Listen closely, inhabitants say, and you can hear the screams of the damned spirits.

Actually, the official history of the building of the Borgo a Mazzano bridge is rather mundane. It was commissioned by Matilde di Canossa, a very, very wealthy countess. She was first married to Godfrey the Hunchback and after his death, when she was 43, she wed a 17-year-old duke, Welf the Fat (I am not making this up). And ordinary workers built it.

Still, there was that faint smell of sulfur when I crossed…

Paul Salsini is a journalist and teacher in Milwaukee, Wisconsin, whose roots are in San Martino in Freddana, near Lucca. The Devil?s Bridge at Borgo a Mozzano figures prominently in his book Sparrow?s Revenge: A Novel of Postwar Tuscany, part of A Tuscan Trilogy, preceded by The Cielo: A Novel of Wartime Tuscany and followed by Dino?s Story: A Novel of 1960s Tuscany; all are published by iUniverse (www.iuniverse.com).