It
is said that since the time of the Etruscans in the 8th century BCE, the bistecca
fiorentina has been served blood-red rare with olive oil and copious
amounts of black pepper. And, if Marco Polo’s mid-thirteenth-century travel
tales are to be believed, 4,500 kilos (10,000 pounds) of black pepper was
consumed per day in an unnamed city in China. Two centuries later in Florence,
architect Filippo Brunelleschi revealed his love affair for peppered foods when
he ate peposo fornacina made with fistfuls of black peppercorns, and
ordered it for the workers on the cathedral’s dome. The high price of pepper
and the shortage of coveted spices, such as saffron and cardamom, are evidence
that the law of supply and demand was one of the main reasons for the voyages
to the Indies.

Many
unexpected foods were the outcome of these voyages. Cacao, corn, potatoes,
tomatoes, and other fruits and vegetables arrived in Europe from the Americas
and inspired the birth of a new cuisine in an old land. For example, a merchant
named Francesco Carletti is credited with bringing cacao back to Florence from a
voyage to South America. We should tip our cups to him when we spoon the thick,
hot chocolate during Florence’s chilly winters at the famed cafés in piazza
della Repubblica. Chocolate sauce on roasted wild boar is a traditional
Christmas recipe from the Renaissance. Bitter chocolate tempers the gaminess of
wild meats.

The
tomato was an important part of the diet in Mexico, known as New Spain to
sixteenth-century Spanish explorers, and greatly influenced first Spanish
cuisine, and later Italian. Europeans, especially the English, initially
thought tomatoes were poisonous, probably because they were served on pewter
plates, which caused death when the high acid of the fruit mixed with the lead
from the plate. It is said that Florentines were the first Italians to consider
the tomato’s fruit edible and that fried tomatoes were an especially popular
delicacy. One can hardly imagine Italy without the tomato known as the golden
apple-pomo d’oro. Would pizza margherita still be called such without
its Italian-flag-red tomato sauce? It is equally hard to visualize the
landscape of Italy without the now all-too-familiar tomato plants.

The
exhibition New Frontier at Palazzo Pitti includes a landscape from the late
sixteenth century entitled the Native American Village of Secoton. The
well-groomed, dirt-paved streets and small, permanent homes with rows of corn
in this sophisticated reproduction of the New Found Land of Virginia look more
like a twenty-first-century subdivision, not one established just 65 years after
Amerigo Vespucci had lent his name to this new frontier of America. The scene
clearly shows that the native peoples were well established with advanced
systems of agriculture about 20 years before the first pilgrims from England
arrived, and that corn was a main crop. Corn (maize) spread throughout Europe
and was found in northern Africa, western China, and the East Indies by 1575.

However
this New World food, probably from Mexico, has yet to fully take its place on
the Italian dinner table. Italians are attached to wheat-based staples just as
the Native Americans were to corn-based foods. Mussolini tried to wean Italy
from its reliance on the breadbasket of North Africa. He campaigned for more
polenta, made from cornmeal, instead of wheat-based pastas and breads. It went
over with Italian mammas about as well as his attempt to promote fast-food-type
lunches instead of the longer, sit-down midday meals.

While
the movie Tea with Mussolini was a cute title for the 1999 movie filmed
in Tuscany, this tea party was about as likely to have happened as a dinner
with an Indian wearing a feather bonnet headdress at the first Thanksgiving in
America in 1621. Painters of the history of the American West normally took
advantage of the romantic image of the lone Indian greeting English settlers
while wearing feathers. The problem with these paintings, literally, is that
many artists inaccurately showed all tribes wearing them. The first
Thanksgiving took place in the Northeast: feather bonnet headdresses were worn
on the Plains.

The
mandatory turkey for Thanksgiving dinner is a New World food. In the early
1500s, wild turkeys were brought from Mexico to Europe. After domesticating
them in Europe, the English colonists then brought turkeys back with them to
the New World, but they arrived farther east on the Atlantic seaboard in
Massachusetts, about 4,000 km (2,500 miles) from Mexico, where the turkey had
begun its travels. In 1784, Benjamin Franklin wrote of his preference for the
wild turkey as the nation’s national bird, not the bald eagle. Ironically,
according to American laws, bald eagle feathers cannot be exported, so the
stereotypical Indian headdresses made for foreign consumers often contained
turkey feathers.

I
will always remember my first American Thanksgiving in Florence in 1998. We
were a group of four with enough food for 40: one Irishman, who brought
potatoes; an Italian who needed wheat- or gluten-free pasta; and an Englishman
who was still afraid to eat tomatoes. As for me, I wanted turkey and knew enough
to pre-order it from the Mercato Centrale, but I did not realize I would be
doing the feather-plucking at home! That day I settled for something more
Italian: the Made-in-Florence honey (or sugar)-and-milk mix known as gelato. I
chose to believe not in its reputed Chinese origin but in the story of an
original invention by a talented gastronome in the Boboli Gardens.

Hand-colored
illustration of Theodor de Bry’s engraved illustration of the Native American
Village of Secoton, which accompanied the text of Thomas Hariot’s 1588 book,
entitled A Briefe and True Report of the New Found Land of Virginia. 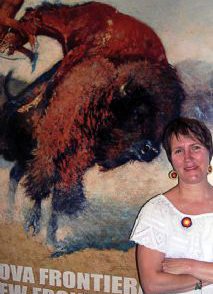