The triumphal arch of the Lorraine

If there is an incongruous monument anywhere in Florence, it is the grandiose and cloyingly ornate neoclassic arch that stands not quite in the middle of piazza della Libertà. Based on the model of the triumphal arches with which the Romans commemorated their emperors and victorious generals or marked important public events, the arch in Florence was built for the entry of Francesco Stefano, the first grand duke of the House of Lorraine, a dynasty imposed on Tuscany following the death in 1737 of the last of the Medici grand dukes, Gian Gastone. Ironically, in 1859, the same arch saw the exit of the last of Tuscany’s Lorraine rulers, Grand Duke Leopoldo II, after he was ousted in a bloodless revolution. 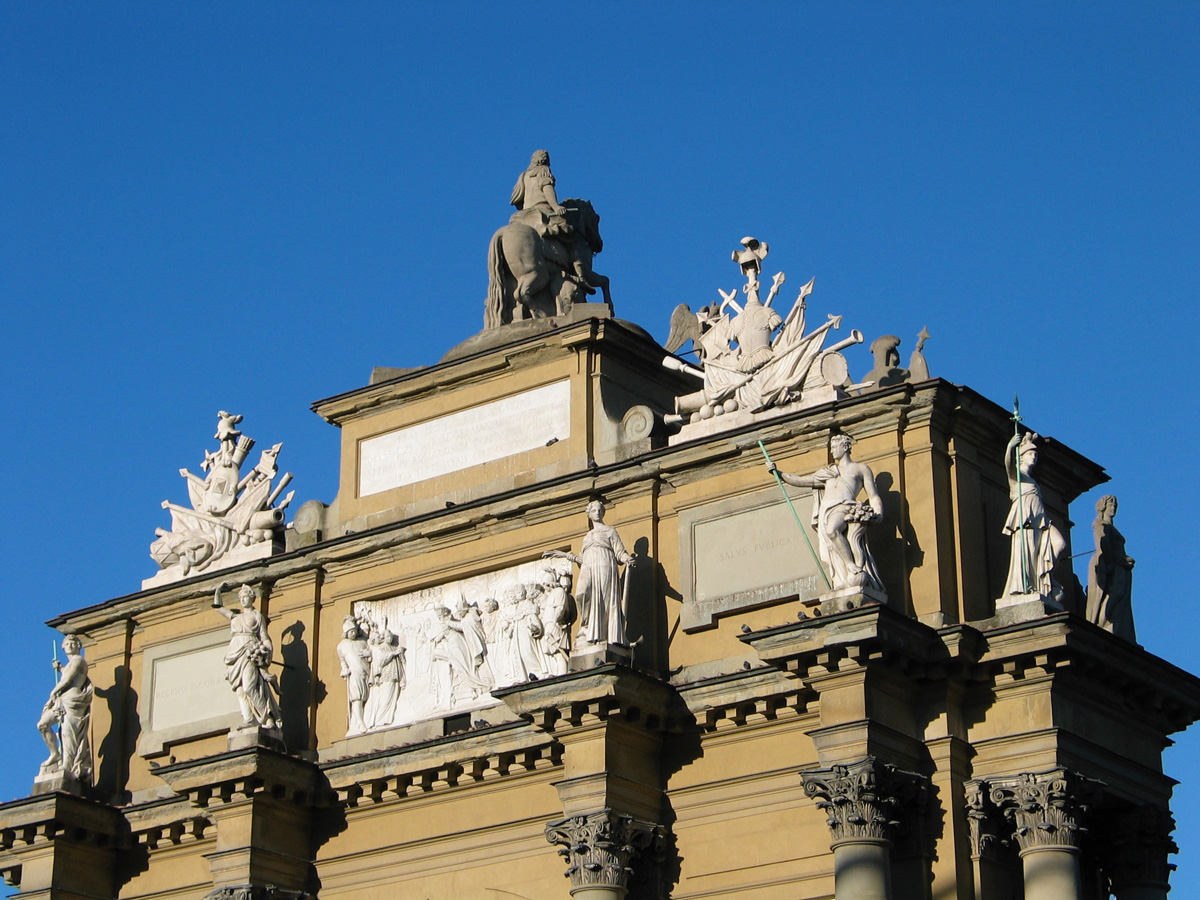 The grandiose and cloyingly ornate neoclassic arch that stands not quite in the middle of piazza della Libertà.

In a kind of territorial “musical chairs”, the French, Austrians and dukes of Lorraine agreed under the peace treaty that ended the war of Polish succession (1733–37) that the duchy of Lorraine be given to Stanisław I, the former king of Poland and father-in-law of France’s King Louis XV. As compensation, the dukes of Lorraine were designated the duchy of Tuscany.

Thoroughly mystified by these geopolitical machinations, the Tuscans did not relish the idea of foreign occupation. Witness to this, French writer and future president of Burgundy Charles de Brosses commented that they would have willingly given “two-thirds of their property to have the Medicis back, and the other third to get rid of the Lorrainers … They hate them.”

Nonetheless, to welcome the new sovereign, his young bride, Maria Theresa of Austria, the daughter and heir of the Holy Roman Emperor, Charles VI, on their first visit to Florence in January 1739, Senator Carlo Ginori, founder of a porcelain factory, proposed the construction of an arch near the ancient San Gallo gate, the main northern entrance to the city. It was designed by Jean-Nicolas Jador, an architect from Lorraine. Work began on December 16, 1738, but, despite more than 400 men working day and night in four round-the-clock shifts, it was impossible to complete the complicated edifice on schedule for the couple’s arrival. The three main arches, a large one in the centre with two smaller ones each side, were finished, but painted wood and canvas decorated with temporary statuary covered the section above them. As the sound of cannons boomed out from Forte Belvedere and fireworks exploded into the sky, it is likely the grand duke could barely see these improvisations as night had almost fallen by the time he reached Florence on that cold winter’s day.

Work on the arch continued for another 20 years, with many artists and artisans involved before it was completed in 1759. Supported by 10 Corinthian columns, the monument features 15 allegorical statues, heraldic decorations, four adornments of flags and arms, and six bas-reliefs of episodes from the life of Francesco Stefano, including his coronation. On the southern façade two double-headed eagles symbolise the Habsburg dynasty. The monument is topped by an equestrian statue of Francesco Stefano by Florentine Baroque sculptor Vincenzo Foggini, known for his masterpiece Samson and the Philistines, now in the Victoria and Albert Museum in London. Oddly, the statue faces away from the city, but it was intended to welcome the grand duke and his entourage on his approach to the city from via Bolognese.

On that first visit, after celebrating mass at the Duomo, the royal couple took up residence in the Pitti Palace and spent their days sightseeing. During the carnival season, they held three lavish masked balls at the Palazzo Vecchio and even managed to attend a game of football in costume. In describing Francesco Stefano in his Letters from Italy, John Boyle, the fifth earl of Cork and Orrery, writes that he was “of a cheerful aspect, and of a most princely personage, yet something sinister and obscure may be perceived in his countenance … He is a Lorrainese, the shadow, not the substance of a sovereign.” And it was the shadow of Francesco Stefano that would, in fact, reign over his subjects because his stay, albeit it a pleasant one, lasted only three months, and he would never set foot in the city again. After the death of Charles VI in 1740, Maria Theresa succeeded her father and named her husband co-regent of the Holy Roman Empire. For the next 27 years, Tuscany was governed in his name by a regency, first by Count Emmanuel de Richecourt and then by General Antonio Botta-Adorno. In effect, Florence and the region simply became a convenient cash cow to be heavily taxed and plundered of its art or of whatever else could be of use to the court in Vienna for supporting its economy and the Austrian army.